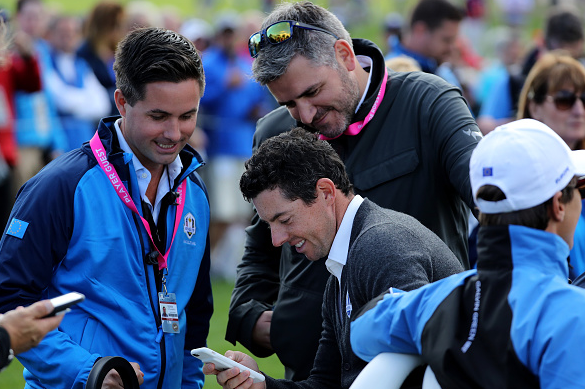 Rory McIlroy will reportedly stop Tweeting after coming off as a narcissistic jerk a couple of weeks back.

In case you missed it, the four-time major champion got into a Twitter fight with former PGA Champion Steve Elkington following his early exit from the U.S. Open.

Now if you’re a millennial bro who lives in a world of memes and GIFs, you probably believe that Rory “totally destroyed” Elkington, like in “epic” fashion and stuff.

But if you’re a public relations pro, or any reasonable adult for that matter, you most likely disagree with that analysis, and believe that Rory’s behavior was big negative for the $200M brand (apologies to Rory).

Here’s how it went down. After Rory missed the cut at Erin Hills, Elkington tweeted his personal opinion, insinuating that Rory fed off Tiger, and with his past success and money in the bank, he may be bored. Elkington then said he feels Rory “probably” won’t win another major. Also, of note, Elkington didn’t tag Rory or use a hashtag – which is an important point.

Less than an hour later, after the Rory bro brigade chimed in, Elkington qualified his tweet by saying that nobody is “more gifted.” (I know, what an insult!)

Nobody more gifted than Rory…
Hes so bored playing golf on tour..

With it being a Friday night, and the weekend of a major, the tweet picked up steam, finally getting the attention of Rory, who was on a (earlier-than-expected) flight from Wisconsin. The world No. 3 replied with a braggadocios tweet, which incredibly included a screen grab of his wiki page. (Any honest broker who read Elkington’s tweet understood the “$100M” figure was not an insult, but was in fact a compliment. Elkington was simply ballparking Rory’s wealth as beyond rich. Talk about narcissism.)

More like 200mil… not bad for a "bored" 28 year old… plenty more where that came from. pic.twitter.com/R2nigEaee7

Elkington replied to Rory’s chest-thumping tweet, and compared it to how Jack Nicklaus behaved, i.e. class. Also, Elkington, as we’ve all done at one time or another, mixed up the form of a word while in the midst of a Twitter debate.

New you were a money guy
Jack won 18 and never mentioned his total cash..
It was 5 mill https://t.co/4vTFyUpY7p

Elkington’s point was that Jack never bragged about his money or titles. But for some reason, or maybe not, Rory, focused only on the MONEY, the $5M figure, and claimed “that’s why” Jack had to design “100’s” (sic) of golf courses. Because, you know, Jack was so damn broke after making tens of millions in career earnings and endorsements, and millions more with his own Golden Bear brand, that he was forced to take up a part time job on the night shift, designing golf courses around the world.

But here’s the kicker. Rory, who never attended college, tried to play the role of English professor, while mocking Elkington’s age – “mustn’t have taught grammar in the 50’s (sic).” (FWIW: Elkington is 54 and was born in 1962. He graduated from high school in 1980, not 1950.) But that’s neither here nor there. To Rory, Elkington is from the stone age, where they obviously didn’t teach proper grammar. You know like understanding the difference between possessives and plurals. Rory’s use of “100’s” and “50’s” is total grammar fail.

That's why jack designed 100's of golf courses… and it's knew… mustn't have taught grammar in the 50's….

BTW: After his ageist dig, Rory’s PR folks lined him up with a nice little old lady to tweet about. Natch.

Yesterday I met this special lady, Noreen Murnane who sadly 6 years ago suffered a stroke. I was honoured to make her wish come true! pic.twitter.com/0hesxNVZAB