If the 74th U.S Women’s Open Championship did one thing, it certainly gave us the answer to a tricky future golf trivia question.

Who won? If your answer is Jeongeun Lee, then you’re incorrect. It’s Jeongeun Lee6. Not to be confused with Jeongeun Lee #2, #3, #4, or even #5, who played alongside #6 in the U.S. major championship (she finished T34, and simply goes by Jeongeun Lee, sans the #5).

If you watched the telecast on FOX Sports and came across the name Lee6, you may have been wondering (as I did) what the “6” meant. Is that a misspelling? Is that a typo? Or is that really “6” after her name?

Who knew that women’s professional golf would have so many Korean nationals with the exact same name “Jeongeun Lee” that numbers would be needed to accurately identify the player.

On June 2 at Country Club or Charleston, Jeongeun Lee6 made the U.S. Women’s Open her first LPGA victory, marking the eighth time in the last 12 years that a Korean has won the USGA women’s major. Only three US players have won since 2008.

Unfortunately, for the LPGA, and women’s golf in the United States, this tournament drew unprecedented attention on-and-off the course for all the wrong reasons.

First, a few pre-tournament comments from golf instructor Hank Haney – who hosts an obscure daily golf radio show on SiriusXM Radio – triggered attention by predicting that “a Korean,” probably with the last name of Lee, might win the LPGA’s second major.

If you’ve listened to Haney’s show regularly, like I do, you know he’s made the same predictions about major LPGA events, but since most female professional golf tournaments are held incognito, garnering about a sentence or two in the Monday morning sports page, no one seemed bothered.

Haney’s program is the only golf radio show worth listening to because he offers honest, unfiltered, and entertaining opinions as opposed to the borderline propaganda you hear elsewhere.

Isn’t that what talk radio is supposed to do? Yes, except when it comes to the thin-skinned, temperamental females who play professional golf. Michelle Wie and Karrie Webb, along with a slew of pompous, virtue-signaling activists, posing as journalists, at golf media outlets such as Golf.com, Golfweek, Global Golf Post, and Morning Read, among others, used their platforms to excoriate and demean Haney’s reputation.

In retrospect, Haney, who admitted he didn’t follow the LPGA too closely, started a conversation about LPGA’s dirty little secret: the dominance of Asian women in the game of golf, particularly Koreans.

At the time of Haney’s comments, the tally for the 2019 LPGA campaign showed a single victory for U.S. women, and six (6) for South Korea, with world No. 1 Jin Young Ko winning twice. That number grew to seven (7) for the Republic of Korea, after the aforementioned Lee6 made the U.S. Women’s Open her maiden LPGA title. Add Nasa Hataoka of Japan and you have eight (of 13) LPGA winners from Asian countries.

Now if we also included second-generation Asians such as Minjee Lee of Australia, whose parents are Korean natives, and is proudly sponsored by Korean brands, along with France’s Celine Boutier, whose parents migrated from Thailand, we’d reach 10 (of 13) wins on the season by Asian women (native or descent).

They’ll never admit it, but following Haney’s comments and over the top virtue signaling by the Tour and it’s media allies, the win by Lee6 was the LPGA’s worst nightmare. A victory by American Lexi Thompson, for example, would have allowed the LPGA to show off its “diversity” of two Americans, while promoting one of its most marketable players to U.S. golf fans.

Instead, though, the little-known Korean with the number in her name, wearing a hat with the sponsor written in Hangul (the Korean alphabet, e.g. 조선글), spoke through an interpreter, and said, “I apologize that I cannot speak English. I’m still trying really hard. I’m still studying for English, so next time if I win the tournament, I will start speaking English.”

It was the exact narrative the LPGA was hoping to avoid.

Unfortunately (or fortunately) not many watched Lee6’s interview, as TV ratings were once again abysmal, resulting in a near-record low audience (even losing to Professional Bowling).

Following the so-called “Asian invasion,” over the past 10 years, the only time the TV ratings have reached 1 million was in 2014 when Korean-American Michelle Wie broke through to win her only major, proving the lack of interest from fans has nothing to do with “racism,” and everything to do with a cultural disconnect.

And the dominance of Asian women in golf is not fading any time soon. 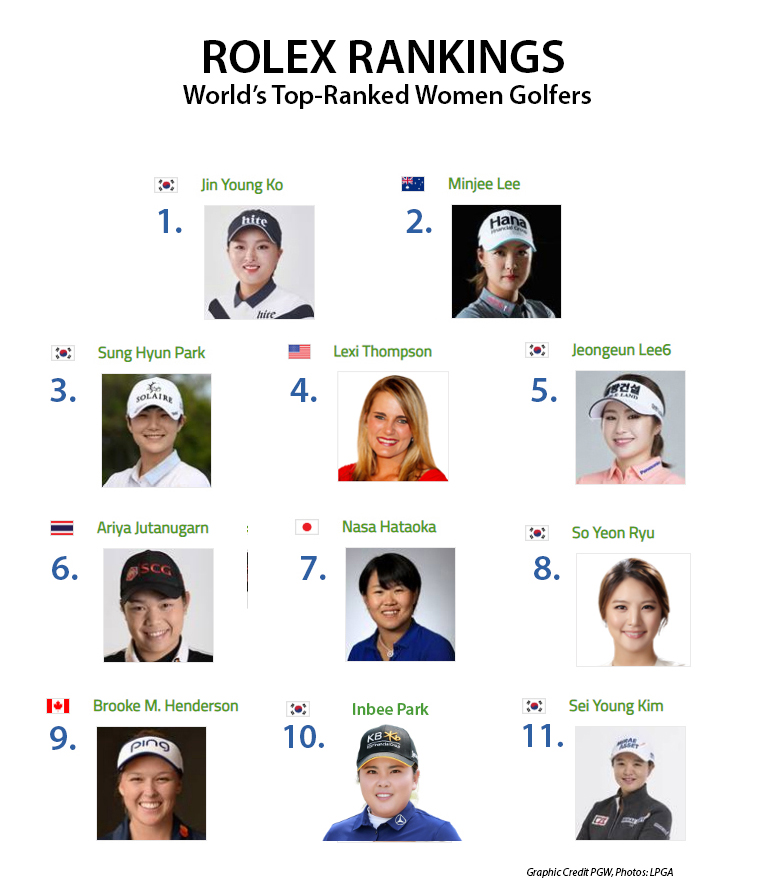 One of Korea’s most iconic women golfers thinks domination is part of their DNA.

Ahead of the 2013 U.S. Women’s Open, Korean legend Inbee Park, who, at the time, was aiming for her third straight major title (which she converted), was asked about the dominance of Korean women on the LPGA, and she bluntly said, “It’s in our blood. I think maybe we have dominant blood.”

It’s hard to argue with Park.

Since the LPGA went to a five-major season in 2013, there have been 32 majors contested, and 15 titles have been won by Korean-born players, including two-time winner Lydia Ko, who was born in South Korea, but moved to New Zealand as a child.

Two more wins were secured by Korean-Americans Michelle Wie and Danielle Kang (both of whom have Korean-born parents). In total, that’s 17 (of 32) major victories by women golfers who have the so-called “dominant blood” of Korea.

While some might wince at Park’s “dominant blood” opinion, it plays into the theory that many Asians succeed due to their long-held value of hard work.

Noted Asian business journalist Su-Lin Tan believes this work ethic is due to the lack of safety nets in many of these still-developing Asian countries.

“With the exception of Singapore and Hong Kong, most Asian countries are developing and there is little likelihood of government help if life goes pear-shaped,” opined Tan in a piece published to the Australian Financial Review.

“The thought process is this: the harder they work, the more successful they are and therefore less likely to be vulnerable.

“Hard work is an age-old Asian value. Some say it comes from Confucius’ teachings. I say it is driven by population: there are so many people in Asia but limited school and work opportunities.“

This work ethic was first seen in Korean trailblazer Se Ri Pak, who won 25 times on the LPGA Tour before Asian dominance was the norm. Pak was superbly talented, but known especially for her relentless work ethic which allowed her to build a near flawless swing that became almost robotic, and rarely melted under pressure.

Couple this work ethic with the fact that many Korean parents make significant monetary investments in their daughters’ golf game with a specific ROI in mind. In fact, most parents of the Korean players travel as a team, with the father acting as the coach/adviser, and the mother taking on the role of team chef and all-around planner. Earnings of the player, from tournament prizes to sponsorship monies, are distributed as income.

That’s not the case with American girls, who play the game more for recreation, and if good enough may hope for some kind of payoff with a college scholarship.

“I feel like one of the things that the U. S. doesn’t have is a national team and somebody to help the girls and the boys kind of grow through that process,” said American LPGA star Jessica Korda in golf.com, when asked about the domination of Korean golfers.

“There’s no like camps. Basically the kids play AJGAs in America to try and get into college, and then from college they get jobs or all that stuff.

“There’s not a developmental program, a team of some sort to either help them with their game, you know. Somebody sees a little bit of talent in a player, and they don’t have the funds to take them to all these tournaments, what are they going to do?”

How to Make The LPGA Tour More Appealing To Americans

Three things, though, could change the landscape of the LPGA to make it more appealing to American audiences.

First and foremost, American female golfers need to improve, otherwise Asian women will continue to dominate, by putting in more work to perfect a reliable Tour-ready swing. As Korda mentioned, some kind of a national program sponsored by the LPGA in partnership with the PGA of America and/or USGA, among others, would be a good start.

Secondly, the LPGA should mandate that players learn English as part of membership to the American Tour. Obviously this is a politically-incorrect suggestion, and it’s one that got former LPGA Commissioner Carolyn Bivens fired. But part of the problem with Asian players being disconnected from American fans is the language barrier. If fans can’t communicate with them, and vice versa, it’s hard for either side to create an emotional bond.

Former LPGA great Jan Stephenson once suggested that the language barrier was “killing” the tour.

“This is probably going to get me in trouble, but the Asians are killing our tour. Absolutely killing it,” said Stephenson in a Golf.com interview.

“We have two-day pro-ams where people are paying a lot of money to play with us, and they say hello and goodbye.”

Finally, the Florida-based LPGA should limit the number of international players, and give preference to Americans. It doesn’t have to discriminate like the Korean LPGA, for instance, which – despite being one of the top women’s professional golf tours in the world – permits only Korean nationals to join and play its Tour, which then acts as a farm system to flood the American LPGA Tour, but some kind of quota for Americans would be benefit to all.

In that same interview, Stephenson suggested a 60% quota for native American players.

“If I were commissioner, I would have a quota on International players that would include a quota on Asian players,” suggested Stephenson.

“I’m Australian, an international player, but I say America has to come first. Sixty-percent of the tour should be American, 40 percent international.”

The LPGA has much potential, but when professional bowling receives higher TV ratings than its premier major championship, there’s a problem.

The views and opinions expressed in this report are those of the author(s) and do not necessarily reflect the position of Pro Golf Weekly.