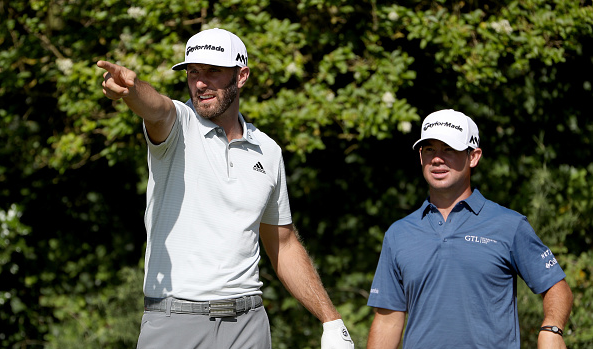 After an always exhausting week at The Masters, the players choosing to continue their momentum at this week’s PGA Tour event are happy that it is located on Hilton Head, South Carolina, a mere 3 hours from Augusta.

Even still, most of the world’s best are taking the week off, but the field at the RBC Heritage might be its strongest in years. Headlined by world No. 1 Dustin Johnson, a fierce battle is forthcoming at Harbour Town Golf Links, known as a shotmakers paradise.

The 24-year-old Aussie is coming off back-to-back T5 finishes in tournaments with MUCH strong fields (The Masters, WGC-Dell Technologies Match Play), and was fantastic on Sunday at Augusta with a 6-under 66 that included six back-nine birdies. Not the most accurate off the tees, but his all-around game has been so fantastic, particularly around the greens, and his confidence is through the roof. A letdown week seems very, very unlikely.

Another player who seems to have been born for Harbour Town, last year’s 54-hole leader at the U.S. Open has been phenomenal so far in 2018, accumulating an impressive seven top 10s in just 12 starts. Strangely, Harman is recently alternating great finishes with awful ones, but after a T44 at The Masters last week, he has another top 10 in his near future if the pattern holds. At 10th on Tour in driving accuracy, 5th in greens in regulation, and 7th in strokes gained: putting, Harman might statistically be the best bet in the field for a great finish. Harman has been strangely hit-or-miss at The Heritage in the past, but does have two top-10s, including a T9 this year, and he has been playing some of the best golf of his career.

The 2014 Heritage Champion is a great bet anywhere, but especially at Harbour Town, where he has not finished outside the top 11 in this event in the past five years. His experience at Augusta last week had to be somewhat deflating after he jumped out to second place after 18 holes, in his most recent attempt at major championship No. 1, but could not keep the heat going and faded into a tie for 28th place. He was not this year’s Sergio Garcia, but at a course he is extraordinarily comfortable at, he could at least be this year’s Wesley Bryan.

The world No. 1 and South Carolina native makes his first trip to his old backyard for the Heritage for the first time since 2009. The only member of the OWGR top 10 to enter, DJ will be a popular pick, and for good reason. The course might somewhat neutralize the length advantage he boasts most weeks, but his short game is far from a liability, ranking 14th on Tour in both strokes gained: around-the-green and strokes gained: putting. He was T10 at The Masters, but not was not really part of the story, and he has to be dying to get back into contention somewhere.

A shocking missed cut at Augusta last year was Cantlay’s first since making his professional comeback last season, ending a string of 21 consecutive cuts made in that span. Still, there is no reason to think the talented 26-year-old is on the way down, and he was fantastic at Harbour Town last year, finishing T3 with four rounds of 70 or better. It would be very surprising to see him south of the cut line for a second straight week.

Augusta tournament record watch was on when Casey was a scorching 9-under through 15 holes on Sunday. A bogey-bogey finish ended those hopes, but a final round 65 meant another high finish for Casey, this time a T15. The second highest-ranked player in the field by OWGR is a threat anywhere, finishing outside the top 20 just once in nine starts this season, including a victory last month at the Valspar Championship.

Simpson is another player coming off good vibes at Augusta, where a final round 67 included back-to-back eagles. Suddenly one of the best putters on Tour, out of seemingly nowhere, Simpson was in the mix at Harbour Town last year, sitting in third place through 54 holes before a disappointing Sunday dropped him down the leaderboard. He also reached a playoff in 2013, showing that a considerable comfort level at this course. Simpson presents an excellent mix of recent form and course history.

Leishman’s frustratingly up-and-down Masters performance, where he played well enough on Thursday and Friday to get into Saturday’s final pairing, but failed to card even a single round three birdie, was a microcosm of his season. In 11 starts this year, he has five top-10s, but also five performances of T31 or worse, and has yet to string together strong back-to-back weeks. That being said, the world No. 16 is the third highest-ranked player in the field, and that should mean something for someone coming off a ninth place finish at Augusta.

Despite a mediocre week at the Masters (T44), Poulter has played some of his best golf the past year, starting with a T11 last season at the RBC Heritage, and capped off by a top-5 finish in Austin and a win in Houston. Poulter was in contention last year on Hilton Head (66-68-69) until a final-round 73 knocked the Englishman out of the top 10. The 42-year old has been terrific off the tee this season (69%, 14th) which should be advantageous on the tight fairways at Harbour Town – some of the narrowest on Tour.

A home course event for the South Carolina native, Kisner lost in a Heritage playoff in 2015 to tournament career-earnings leader Jim Furyk, and finished T11 last year, largely off the strength of a sizzling Friday 64. His results have been underwhelming in 2018, but his best outing came very recently, a runner-up finish at the WGC-Match Play. Consistently one of the best on Tour in driving accuracy, Kisner hits a lot of fairways, and when his iron game is clicking, he also makes a lot of putts, currently ranking 8th on Tour in strokes gained: putting.