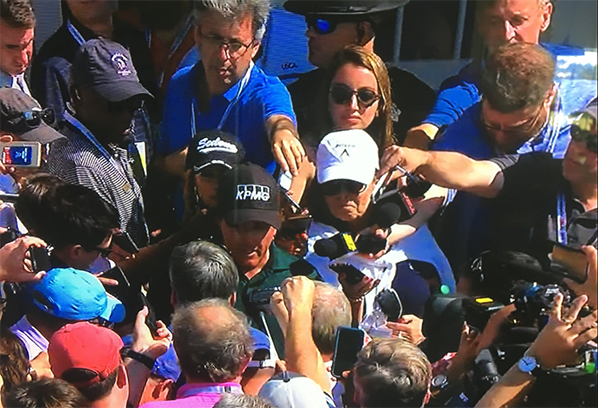 So yesterday was Phil Mickelson’s 48th birthday, and the five-time major winner was hoping to get into contention at the 118th U.S. Open to complete the final leg of a career grand slam. But like many in the afternoon wave, Lefty struggled against what was a murderous USGA setup at Shinnecock, and found himself 4-over through 12 holes, and 10-over for the tournament.

Frustrated and angry, the legendary golfer then pulled out a gun and shot a patron right there on the 13th green.

Oh, wait, that didn’t happen. That’s only what seemed like happened if you followed the media’s reaction on Twitter.

Instead of murdering someone, Phil chased after his runaway Callaway and hit it as it was moving – causing the USGA to assess a two-stroke penalty.

Now that it’s understood Phil hit a moving golf ball and did not in fact murder an old lady, let’s take a look at some of the self-righteous reactions from the “media.”

Here’s a round up of 10 of the most smug and sanctimonious hot takes.

1. Rick Reilly – The Athletic (Or Something)

O’Connor is a serial over-reactor to media-contrived scandals. Google his hot take on Tom Brady during deflategate. Here he wants Lefty escorted off the premises. Lol.

On his birthday, Phil Mickelson just made a mockery of the U.S. Open. I suggest that the same USGA suits that hounded Dustin Johnson at Oakmont ask the birthday boy to please leave the course.

Shackelford’s usually one of my favorites, but he’s a lefty and travels in the media echo chamber. The tweet is fairly mild, but his blog post claims Mickelson’s legacy will take a hit for his , er penalty, on Saturday.

It’s hard to see how this is anything but serious breach of the rules worthy of DQ. The ball is a goner off the front of the green. Holy cow. https://t.co/eQ9tjU3C9c

This was a despicable sleazebag move by Shupnuck, who’s usually pretty fair-minded. The Golf Mag writer, though, goes over the edge and tweets out a private text message to the world. Geez I wonder why Phil didn’t want to talk to this guy? Also, note the use of “unrepentant” – a word usually reserved for criminals.

Ferguson is one of the best golf writers alive for real-time coverage, but he makes no sense here. The tweet is not so much smug as it shows the plain pack mentalityism of the golf media.

Phil going all John Daly at Pinehurst on us … Amazing. Good call by Strange: "Never seen that from a world-class player."

Morgan takes a break from gun control rants to join in on the media’s cause of the day: Kill Phil.

I hope Phil Mickelson wakes up today, realises what he did is completely unacceptable, and disqualifies himself. #USOpen pic.twitter.com/q0uWXC2j3U

Green Jr. is upset that Phil basically called out the self-righteous whiners (i.e. the media jackals).

“Toughen up” Phil Mickelson said to those who were bothered by what he did today.
Ironic words from a guy who hit a moving ball to avoid a potentially more difficult shot.

The entire Golf Channel panel last night was a joke, sadly including Nobilo and David Duval. We expect as much from the legendary one-time PGA Tour winner Brandel Chamblee, but it was disappointing to see Duval and Nobilo join the pig pile.

“To me it was quite straight forward. I think he (Phil Mickelson) should have been DQ’d. I’ve been DQ’d. He was not using the rules, he was definitely breaking the rules,” – @FrankNobiloGC, on Mickelson’s two-stroke penalty on the par-4 13th at the US Open.

Wacker writes that Mickelson now has a “cross to bear.” Talk about drama-queen overkill. This is simply embarrassing.

This guy would not give it a rest all day long. In between calling Daniel Berger “Dana Berger,” and telling the FOX audience that Phil has struggled since breaking up with his caddie Bones (despite having his best season in years and capturing his first win since 2013), Buck droned on and on and on… right up until the sun was setting on Long Island Sound, using the old, “what do you say to those fans (meaning himself)…” in a post-round prosecution of the USGA’s Mike Davis and John Bodenhamer for not DQ-ing Phil.

These tweets sum up Buck’s Saturday.

Kind of a dick move by Joe Buck to listen to the answer Phil Mickelson gave (3 times) and then completely misrepresent what he said to make it sound worse than it was. Should expect nothing less from "Not Jack" Buck.

If you listen to Joe Buck, you would think Phil Mickelson murdered someone on the 13th green.

PS – Did you know there’s a four-way tie for the lead after 54 holes!?