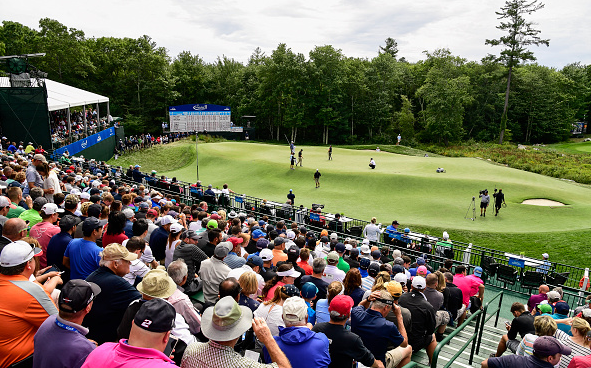 The Dell Technologies Championship boasts neither the history nor the rota of courses like those it’s sandwiched between in the FedExCup postseason.

The Northern Trust has its roots in the old Westchester Classic, where Jack Nicklaus and Arnold Palmer won three of the first six editions. It now rotates among such renowned New York metro layouts as Bethpage Black, Liberty National and Glen Oaks Club. 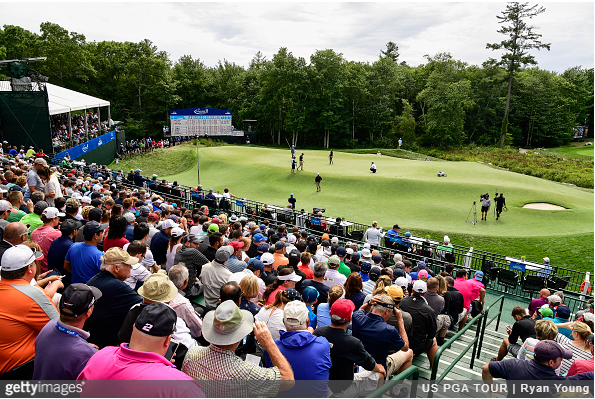 The BMW Championship, meantime, is the name for the old Western Open, which began in 1899 and was considered a professional “major” in the pre-Masters days. It alternates between Chicago and such courses as Crooked Stick, Bellerive and Cherry Hills.

The second playoff event, meantime, dates only to 2003 and has never been played outside the TPC Boston – a course that was redone just five years into its existence even though Arnold Palmer’s name was on it.

What may set this event apart, though, is as an indicator. In two of the past four years, the winner at TPC Boston has gone on to win the overall FedExCup crown – Henrik Stenson in 2013 and Rory McIlroy last year.

Since 2010, only one other early playoff winner has taken the big prize, when Billy Horschel won 2014’s final two events.

After Dustin Johnson’s win on Sunday, there’s no shortage of top storylines coming to Boston.

Hard as it might be to fathom, Johnson seemed a forgotten man as recently as two weeks ago when Player of the Year talk began to swirl upon the final putt of the final major championship of 2017. 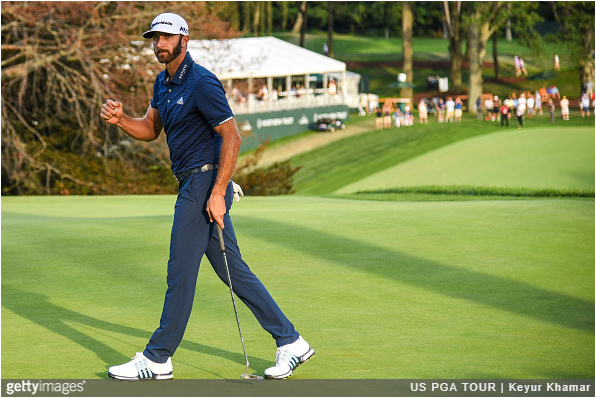 Justin Thomas’ triumph at the PGA Championship was his first major title and fourth of 2017, and he also posted just the fourth 63 ever shot at a U.S. Open. Jordan Spieth also has a major title among three wins, keeping him close if he could win during the FedExCup playoffs.

Even Hideki Matsuyama got a bone, if he could add a FedExCup to two World Golf Championship wins and his top-5 at the PGA. Johnson? Despite being No.1 in the world ranking, he was a clear No.4 in the conversation.

Sunday’s victory at The Northern Trust, where he made up a five-shot deficit to Spieth over the final 13 holes, offered the first real signs of the DJ that came to the Masters on a run of three convincing wins.

Johnson never got to tee it up at Augusta National, victimized by that slip-and-fall mishap on the stairs of his rental house, and he admitted it wasn’t until recently that his back started feeling normal again. If Sunday was any indicator, though, watch out.

Johnson’s triumph extends a recent trend of top-tier winners during the playoff season, with each of the past nine playoff winners coming from the top 15 in the world rankings. 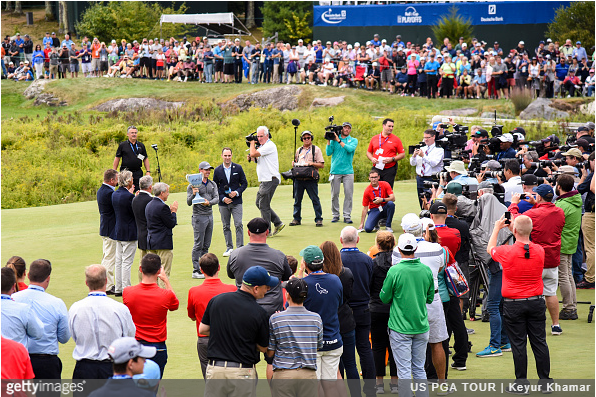 Set aside Patrick Reed’s victory in last year’s playoff opener, in fact, and each of the other winners have been ranked in the top 10. Reed, No.14 at the time, was followed last year by McIlroy, Johnson and McIlroy again.

Two years ago, Jason Day sandwiched wins around Rickie Fowler’s triumph in Boston. Spieth took the biggest spoils, though, when he won the finale at East Lake.

You’ll need to go back to 2014 to find the last outlier: Horschel’s closing flourish.

So if you’re trying to pick a winner this week, we’ve just eliminated four-fifths of the field. You’re welcome.

The playoff lineup will lose another 30 players on Labor Day, with 70 able to make plans for Chicago when the schedule resumes after a rest date. 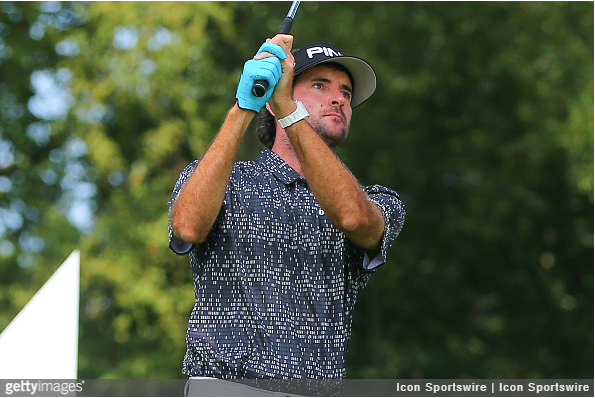 This week’s bubble foursome: No.69 Kevin Tway and No.70 Grayson Murray are in, No.71 Rod Pampling and No.72 Bubba Watson are out. They head to Boston separated by just 17 points.

One spot is sure to open up with the injury slide of Brandt Snedeker, who has shut down his season after rib woes kept him from playing the final two majors. He holds down No.68 this week, a drop of four from where he entered the playoffs.

Last year, six players climbed into the top 70 with their performance in Boston, right in line with the average of 6.4 for the playoff decade.

We’ve never heard any rationale from Sergio Garcia as to why he makes an annual habit of sitting out the playoff opener, but the reigning Masters champion hasn’t deviated from his plan as he jumps into the postseason in Boston. 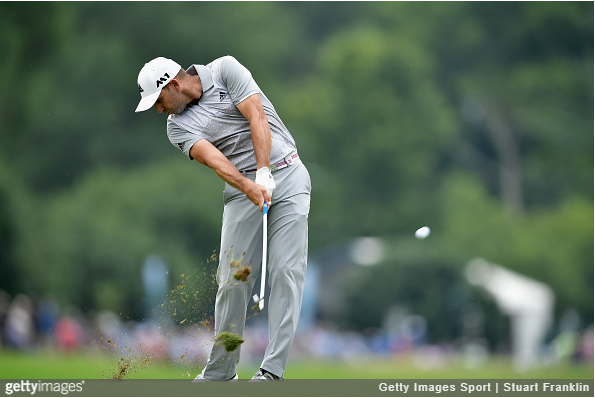 It could cost him a spot in the Tour Championship finale in Atlanta. Again.

Last year, Garcia entered the postseason at No.20 on the FedExCup points list, didn’t crack the top 20 at either TPC Boston or the BMW Championship and dropped out of the top 30 in points. It was even odder in 2015, when the Spaniard skipped the first two playoff stops even while starting outside the top 30.

After starting these playoffs No.22 in points, Garcia already has slipped to 30th after The Northern Trust.

After giving indications he would skip the first two playoff events to attend to the birth of his second child, Adam Scott became a late addition to the field last week.

Without teeing it up in Boston, the Aussie’s season is over. 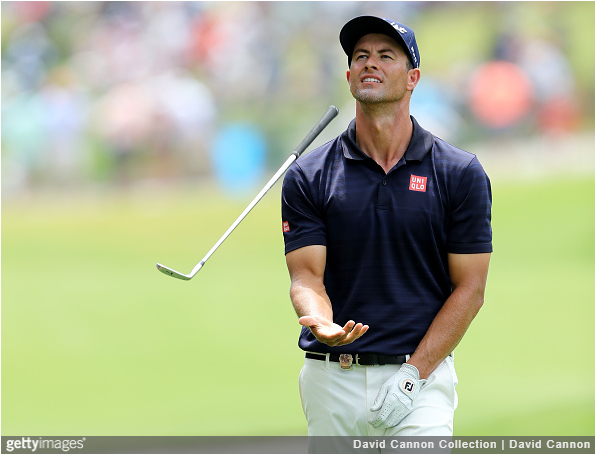 Scott entered the playoffs at No.66 in FedExCup points, giving him little wiggle room to get to Chicago if he stuck to his original gameplan. Those concerns came to fruition over the weekend, when he fell to 73rd after The Northern Trust.

Now Scott must be one of those to play his way in.

Regardless of what happens this weekend, it’s been a satisfying fortnight. Wife Marie Kojzar gave birth last week to a son, which they named Byron. The tyke was preceded by his 2-year-old sister, named Bo Vera.

Paul Casey’s fifth-place finish at Glen Oaks Club marked his fourth consecutive top-5 in a playoff event, after last season ended with a pair of runner-up finishes and fourth at the Tour Championship. 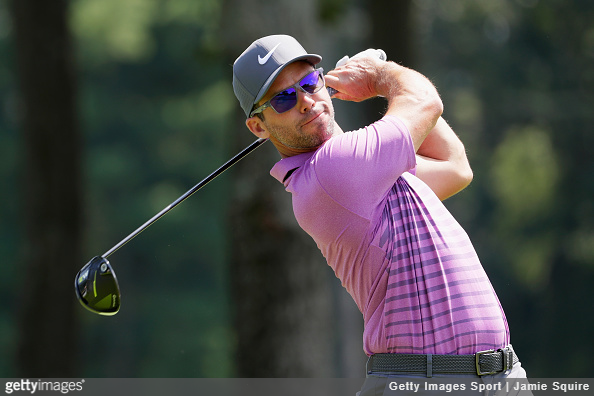 Go back a little further, and Casey also was fifth at the 2015 finale, giving him five top-5s in his past six playoff events. Clearly he likes this time of year.

“I guess I’ve put myself up there a lot,” said the English pro, enjoying a renaissance after injuries cost him several quality years.

This week, it’s Casey for whom daddy duty looms. Wife Pollyanna is carrying their second child, due the week of the Tour Championship. They may choose to have the baby early, but it could still put Casey on the shelf for the next playoff event.

Casey comes to Boston at No.12 on the points list – not exactly in danger of missing East Lake, but not completely in the clear, either.

Phil Mickelson and Bubba Watson will become the first players in FedExCup history to reach 40 playoff starts when they strike their first drives at TPC Boston. 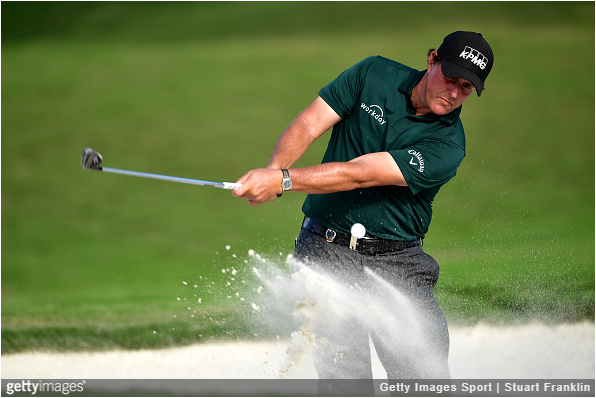 Mickelson was assured of the milestone from the outset, starting the playoffs at No.51 on the points list. He’s now down to 58th, but still on track to make one more at the BMW Championship in two weeks.

Watson, on the other hand, had work to do. A spotty season left the two-time Masters champion at No.113 in points when the playoffs started, but a share of 10th last week lifted him to 72nd on the latest chart. He’s now two spots out of extending his season to Chicago.

“My thing is just play until they tell me I can’t play anymore,” Watson said.

Running against conventional thinking, you don’t want to be the 54-hole leader at TPC Boston.

Each of the past seven winners has come from off the pace, including McIlroy’s charge from six shots back on the final day last year. 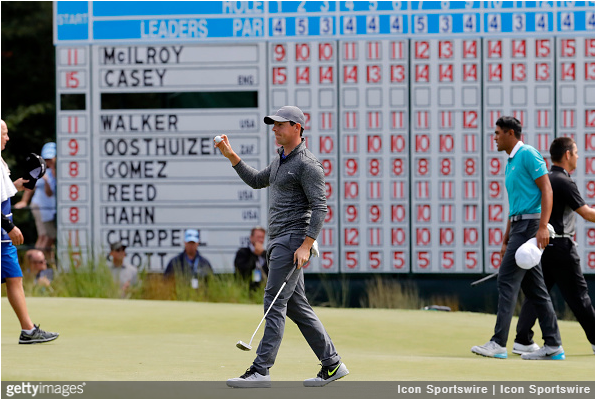 Casey held a three-shot advantage after 54 holes, but stumbled down the stretch on the way to a 73.

Only once during the playoff era, in fact, has a 54-hole leader at TPC Boston managed to finish off the task. That would be 2009 winner Steve Stricker, who was part of a three-way tie for the lead after three rounds.

Oddly enough, three of the four editions held before the playoff era were captured by the 54-hole leader.

For the first time since the tournament’s debut 15 years ago, the Dell Technologies Championship will not be played in connection with the Tiger Woods Foundation. 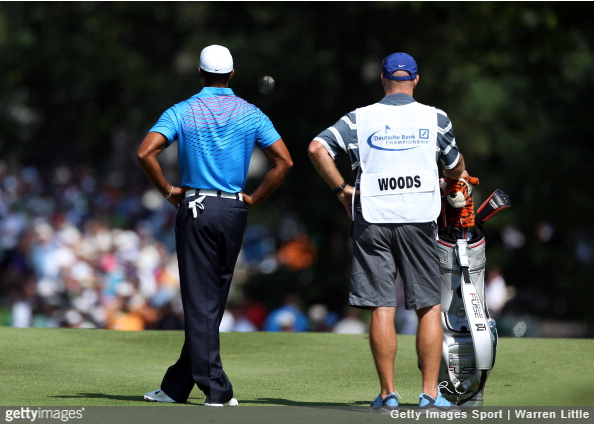 Then known at the Deutsche Bank Championship, the tournament was the first foray by Woods into a regular-season host role, with the Earl Woods Scholarship Program serving as the event’s primary charity beneficiary.

Between Woods’ physical ailments and the creation of the AT&T National (now Quicken Loans National) in 2007, that relationship took more of a back seat. Last year, the foundation added the tour’s longtime Los Angeles stop – now the Genesis Open – and reprioritized its resources. 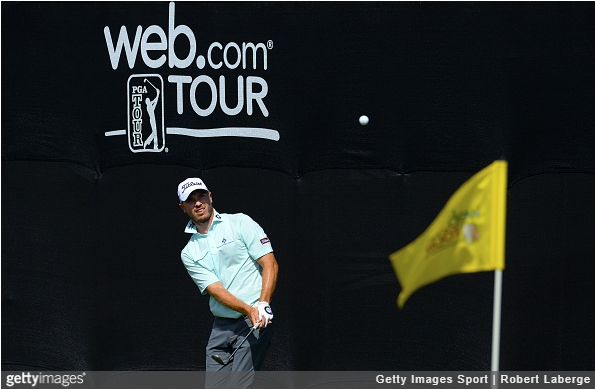 The final 25 PGA Tour cards for next season are at stake, pitting the top 75 players on the Web.com Tour money list against those who finished Nos. 126-200 in FedExCup points, now seeking a last-gasp shot at regaining full status.

A new Finals money list will fill the 25 remaining PGA Tour slots. The 25 who received cards from regular-season earnings are part of a separate money list to set entry priority.

Unlike previous years, there are no former major champions in the field for the Finals opener. But fans will find such familiar names as Hunter Mahan, Stuart Appleby, Johnson Wagner, Daniel Summerhays and Sam Saunders.