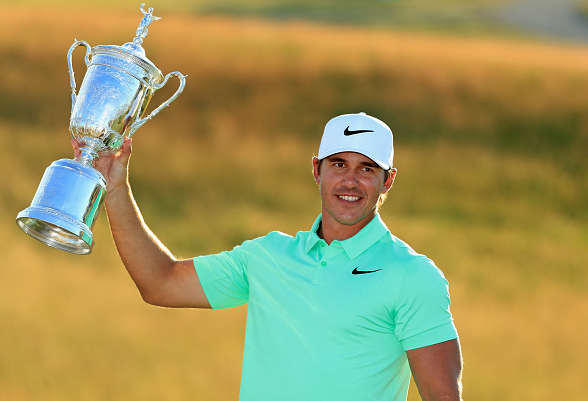 If any golfer on the PGA Tour would be compared to a champion Thoroughbred racehorse, it would, without a doubt, be Brooks Koepka.

Koepka is big, he is muscular, he is fast, and he is powerful. Just like Seabiscuit, one of the greatest racehorses of all time, at his most famous race, the 1940 Santa Anita handicap, Koepka stayed near the lead for three turns (rounds), and when Kayak II (Brian Harman) left him a small window on the home stretch (back nine of the final round), Koepka absolutely exploded to the finish line, leaving his fiercest competitors in the dust.

On Father’s Day Sunday, at the final round of the 2017 U.S. Open at Erin Hills in Erin, Wisconsin, Koepka completed his greatest event: an assertive four-stroke record-breaking victory over Harman and Hideki Matsuyama by four lengths (strokes).

With a final-round 5-under 67, Koepka reached -16 at a surprisingly facile U.S. Open that looked nothing like any of the 116 versions before it.

And by the way, Koepka was awarded $2,160,000 for his first major victory, one of many records set during this U.S. Open.

HOW KOEPKA DID IT

Among the big names, Koepka was largely overlooked. He has a reputation as one of the longest hitters on Tour, a necessary asset for a course as long as Erin Hills, but he had never won a major and his 2017 season has been the epitome of streaky.

Just one stroke behind Brian Harman to begin the day, Koepka came out of the gate fast, jumping into the lead with birdies on the first two holes.

He played his next 11 holes at even-par (one birdie, one bogey), staying near the top of a leaderboard that had been incredibly congested all week. Koepka and Harman were tied at -13 though 11 holes when Harman, who had not bogeyed a back nine hole all week, left a small opening for Koepka when he bogeyed 12 and 13.

One group back at the time, Koepka then put his foot to the floor and birdied 14, 15, and 16, and suddenly, Koepka was three up.

With a par-par finish, Koepka turned a tight tournament into something ended up looking like a bit of a runaway. Koepka managed to stay out of Erin Hills’ notorious fescue all week, and he led the field in greens in regulation, missing just 10 greens in four days, including a 17/18 effort on Sunday.

WHAT IT MEANS FOR KOEPKA

As a first major victory, the 27-year-old Koepka now has some validation for his career.

It was just his second PGA Tour victory, although he is also a five-time winner on the European Tour, which he played before going full-time in the U.S.

It is life-changing and legacy-changing for the man who will see his profile increase precipitously.

Some may try to put an asterisk next to the result, since the tournament played so much easier than it usually does, but everyone else played that same course, a course that took out the top 3 players in the world rankings before the weekend, and Koepka was easily the best.

As incredible as Koepka’s 67 was, it was actually the second-lowest round of the day. Sunday low-man honors went to Hideki Matsuyama, who, for the second time this week, went very low.

He rode eight birdies to a 6-under 66, which propelled him from 14th place to second.

It was too little, too late, but Jordan Spieth finally looked in major form on Sunday. The 2015 U.S. Open winner was much, much better tee-to-green in round 4, shooting a 3-under 69 and rising 24 spots up the leaderboard, finishing T35 for the championship.

Matching Spieth’s 69 was Xander Schauffele, who went a long way in proving that his round-one 66 was no fluke.

Schauffele finished an impressive T5 in not only his first U.S. Open, but his first major championship start.

The next time somebody wants to prove the old adage that it is extremely difficult to follow-up a phenomenal round in a major, Justin Thomas will be Exhibits A, B, and C.

Just one day after a record-shattering performance where he carded 9 birdies and an eagle on his way to a 9-under 63, Thomas looked like he was playing a different course in round 4.

Thomas, playing in the final group with Harman, managed just a single birdie in a 3-over 75, a whopping 12 strokes worse than his round 3 total. Thomas especially struggled with his approach shots, hitting just 9 of 18 greens.

Patrick Reed looked to have had things figured out when he shot a 65 in round 3 to give himself a chance going into Sunday. However, even with his Ryder Cup pants on, Reed had major accuracy issues in round 4, hitting just half his fairways and fewer than half his greens on his way to a two-over 74.

Like Thomas, Reed had only one birdie in his final round, causing him to drop from 7th place to a tie for 13th.

Si Woo Kim has had a nightmare season, with the exception of one great tournament. That tournament, however, was a victory at THE PLAYERS Championship, and after reaching -9 through 54 holes, Kim looked to have a great chance at adding the U.S. Open to that resume.

The 21-year-old was able to get nothing together, however, struggling badly on the greens and posting a birdie-free 3-over 75 to drop into that tie for 13th.

“I played really solid from the moment we got here on Monday and all the way through [Sunday]. The ball-striking was pretty solid. It had to be, especially with the wind. And I got out there with the putter a little bit [Sunday] and all week. So all around my game is pretty solid and I couldn’t be happier.”
-Brooks Koepka, 2017 U.S. Open Champion