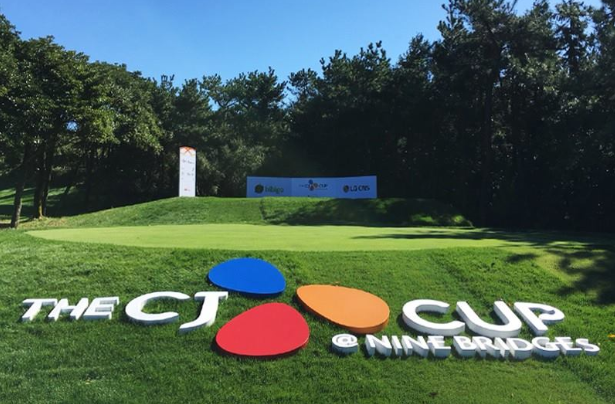 Asian golf has taken off in the men’s game, and South Korea has decided to finally get in on the action. While they undoubtedly have had a significant contribution to the PGA Tour over the past few decades, they took an even bigger step forward last year by hosting an official Tour event.

The picturesque Club at Nine Bridges on South Korea’s Jeju Island, one of Asia’s best-kept golf secrets, will once again play host to the second annual CJ Cup at Nine Bridges.

The second of a three-stop Asian swing, the CJ Cup field will include 78 players – including defending champion Justin Thomas, and top stars Tyrrell Hatton, Jason Day, Ian Poulter, Alex Noren, Adam Scott, Brooks Koepka, and Marc Leishman, among others – all vying for the biggest purse outside of a WGC or major.

The CJ Cup at Nine Bridges has a history going all the way back to, well, last year.

As a new event on the PGA Tour in 2017, the CJ Cup was inserted into the PGA Tour schedule as the second tournament of a three-week Asian swing, preceded by the CIMB Classic in Malaysia and proceeded by the WGC-HSBC Champions in China.

Justin Thomas took home the inaugural trophy after he bested Marc Leishman in a two-hole playoff.

Hosted by The Club at Nine Bridges on Jeju Island, just south of the Korean Peninsula, The CJ Cup offers a massive $9.5 million purse to its 78-man field – a field featuring an eclectic mix of American and Asian players, in addition to a few European and Aussie stars.

Jeju Island is no stranger to big-time sports, having hosted the World Cup in 2002. The island also played host to the European Tour’s Ballantine’s Championship (at the Pinx Golf Club) for three years, from 2008-2010.

The Club at Nine Bridges is a former site of an LPGA event that was the first ever held in golf-rich South Korea. The course holds an excellent reputation in international golf, being South Korea’s only course ranked inside the world’s top 100.

Entering the tournament as the top-ranked player in the field, Justin Thomas opened the inaugural CJ CUP @ NINE BRIDGES with rounds of 63-74-70. Entering the final round tied for the lead with Scott Brown, Thomas posted a 72 on Sunday to join Marc Leishman in a playoff at 9-under 279.

After halving the first extra hole with pars, Leishman found the water on the second playoff hole, while Thomas made an up-and-down birdie for the victory.

Thomas earned his seventh career title and his first playoff win on Tour.

Will be added when released by the PGA TOUR.