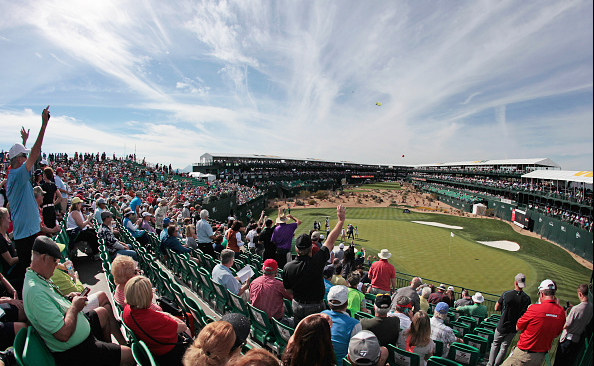 The PGA Tour moves from the coast of southern California to the desert of Arizona for this week’s Waste Management Phoenix Open at the iconic Stadium Course at TPC Scottsdale.

The long-running tournament – the 12th of the season, and third of the five-event “West Coast Swing,” provides yet another opportunity for the players to rack up some early-season FedExCup (and world-ranking) points.

The field in Scottsdale, Arizona includes three of the top-10 ranked players in the world, including No. 4 Justin Thomas, who returns after a two-week break, No.6 Jon Rahm, and No. 7 Xander Schauffele.

The tournament bounced around a few courses in the Phoenix area over the next few decades until 1987 when the Stadium Course at TPC Scottsdale became its permanent location.

The Phoenix Open has had a lot of great champions in its history, including Byron Nelson, Ben Hogan, Jimmy Demaret, Johnny Miller, Arnold Palmer, Vijay Singh, and Phil Mickelson. One of Miller’s two victories was by an insane 14 strokes in 1975. Mickelson, Palmer, Gene Littler, and Mark Calcavecchia share the tournament wins records, with three a piece.

In a tournament best known for the enormous crowds it draws, the par-3 16th, “The Coliseum”, is its most famous. Surrounded by a large grandstand and 274 skyboxes, players on the hole are subject to the loudest cheering they will hear all season.

The defending champion of the Waste Management Phoenix Open is Gary Woodland, who shot a 7-under 64 on Sunday and then beat Chez Reavie on the first sudden-death playoff hole to capture the 2018 Phoenix title.

Woodland finished his final round with nine birdies against two bogeys en route to a 18-under par four-day total.

The win was the third of Woodland’s PGA Tour career, and earned the American $1,242,000 and 500 FedExCup points, while moving him from No. 38 to No. 5 in the FedExCup standings at the time.

The field this week in Scottsdale, Arizona is headlined by 13 of the top-30 ranked players in the world, and 10 of the top 25, including defending champion Gary Woodland (No. 24).

Major winners Keegan Bradley, Jimmy Walker, Bubba Watson, Stewart Cink, and Webb Simpson are some of the other familiar names.