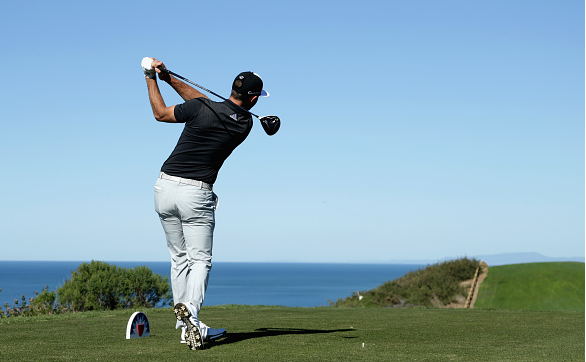 Justin Rose was not quite as hot as he was in the opening round at Torrey Pines, but his 8-under par total is still good enough for a one shot lead after two rounds of play at the Farmers Insurance Open.

Canada’s Adam Hadwin and 2-time Farmers champ, Brandt Snedeker, are tied for second place at 7-under.

Here are 5 quick thoughts about the second round at the Farmers.

All three missed the cut. What were the odds of that happening!?

It’s not a common thing to be bragging about which Tour players broke 70. In fact these days, it’s who is going to break 60 this week.

Bud Cauley had six holes to play in his second round at Torrey Pines, and was at 2-under – two shots clear of the cut line. After bogeys on 4 and 5 (his 13th and 14th), Cauley dropped down to the danger zone (right on the cut-line at even-par). But he calmed his nerves and proceeded to par the next three holes.

The Alabama alum arrived at the relatively-easy par-5 9th hole at the North Course (his 18th of the day) needing a simple par to make the weekend. Cauley missed what looked to be about a 4 footer for par and missed the weekend. Ouch!

4. Back Down To Earth

Last week Dominic Bozzelli stunned the golf world as he jumped to the top of the leaderboard after the first round at the CareerBuilder Challenge. The rookie maintained his composure throughout the 4 rounds at PGA West, and finished in the top-5 with a -17 total.

Bozzelli seemed to arrive at Torrey Pines with renewed sense of confidence as he proceeded to out-golf the likes of Tiger Woods, Jason Day and Dustin Johnson in the opening round, posting a solid 1-under 71. But the second round was another story for the 25-year-old from New York, as he carded an 11-OVER 83! – and missed the cut by a mile.

Don’t look now but Keegan Bradley is having a pretty decent start to the 2016-17 season. As one of only three to shoot two sub-70 rounds at Torrey Pines, Bradley finds himself at -6 and tied for 4th place – only two shots off the lead.

In six starts this season, Bradley has finished inside the top-25 in five of them – with his only hiccup being a MC at the Sony in Hawaii. The former PGA champ, who has struggled badly in recent years, is ranked 23rd in the FedEx Cup standings and has made over $650K already.