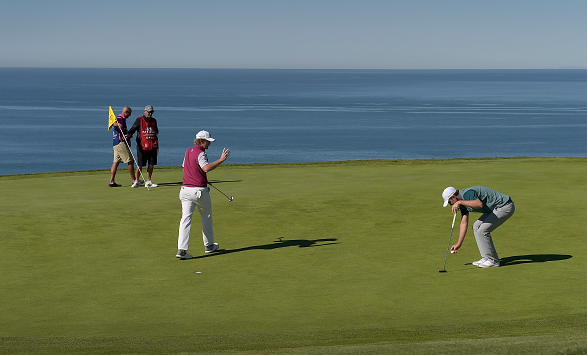 Brandt Snedeker was able to leapfrog his playing partner, Justin Rose, the wire-to-wire leader through the first two rounds, and grab a share of the lead after three rounds at Torrey Pines.

Snedeker, a two-time winner at the Farmers Insurance Open, fired a 2-under 70 and is tied with Patrick Rodgers (67) atop the leaderboard at 9-under.

Tony Finau (67), who along with Rodgers had the round of the day, and Cheng Tsung Pan are only one back at 8-under.

Rose carded a 1-over 73 and dropped into a tie for 5th at -7 with seven other players including Pat Perez and Stewart Cink.

Here are 5 quick thoughts about the third round at the Farmers.

Brandt Snedeker obviously plays well at Torrey Pines. The defending champ, and winner of this is event back in 2012, shot another sub-par round (and they’re not easy to come by at Torrey – just ask Jason Day, Tiger Woods, Dustin Johnson, Rickie Fowler, Jimmy Walker… You get the hint). In fact, going back to last year, the 36-year-old Nashville native has gone six straight rounds at 70 or better: 70-70-69-68-69-70 for a 16-under total. Snedeker (and another pretty famous player below) have to be the favorites to pull away from the crowded leaderboard on Sunday.

That other famous guy? Yep, don’t look now, but Phil Mickelson is hanging around. While everyone was talking about Tiger and Jason and DJ… Phil fired two under-the-radar rounds of 71 and 72, that kept him around for the weekend. On Saturday, with the spotlight back on him, the 46-year-old Mickelson had a much better go at it – shooting a 4-under 68 to jump into the top-20 at 5-under. Only 4 shots back of the lead now, the 3-time champ at the Farmers has a realistic chance, but will need to card about a 67 for a shot at title 4.

Heading into Sunday’s final round, twenty-three players are within 4 shots of the lead at the Farmers. This is major championship stuff, and alone proves the difficulty that is Torrey Pines. No one has been able to pull away with a totally lights out round, and in fact not one player on the leaderboard has had three consecutive sub-70 rounds. This is amazing, in this day and age of seemingly weekly sub-60s.

After a sizzling opening round 7-under 65, Justin Rose has been treading water. The Olympic gold medalist has gone 71 and 73 and is right where he was on Thursday night. But despite playing to even-par over the last 36 holes, Rose is only 2-strokes back and still very much in the hunt. However, another sluggish, around-par performance is not going to get it done on Sunday at Torrey.

5. Only 11 Players Under Par Every Round

Here’s another statistic to show off the difficulty that is Torrey Pines. Only 11 players on the leaderboard have shot under-par in all three rounds this week. And one of them is in a tie for 34th place.