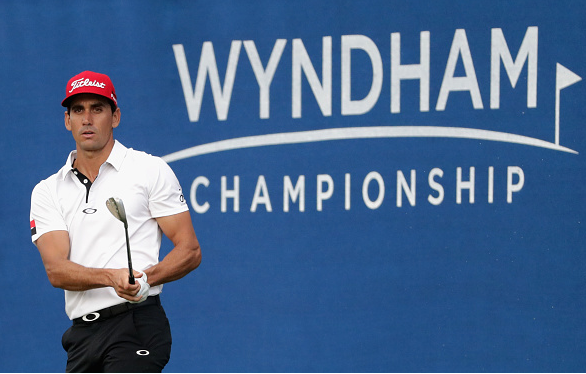 Rafa Cabrera-Bello got his year off to a hot start, with a T11 at the WGC Cadillac, 3rd at the Dell Match Play, and 4th at the Shell Houston Open. Now, he is threatening to finish his season just as good as he started it.

Fresh off a 5th place performance representing Spain in the Olympics, Cabrera-Bello shot a first round 7-under 63 to tie Kevin Na for the lead at the Wyndham Championship. Not eligible for the FedEx Cup playoffs as a non-member, this will be Cabrera-Bello’s last PGA tournament of the season.

Today was all about the flatstick. Rafa Cabrera-Bello obliterated the rest of the field at shots gained: putting (6.203). An eagle on the par-5 5th hole busted a par binge, and a birdie on his last hole gave him a 63, a number that has been good to a lot of golfers lately.

Kevin Na was second in strokes gained: putting and hit 15/18 greens in regulation. He added seven birdies, bringing his total to 7-under.

Right Where He Left Off

The last time we saw Jim Furyk, he was posting the best round in the history of PGA rounds: a 58. He set the bar high for his encore, and did not disappoint. After shaking off an early bogey, Furyk could not miss. He was accurate off the tee hitting 12/14 fairways, and even better on his approaches, hitting all 18 greens in regulation.

Not Quite Where He Left Off

The last time we saw Jimmy Walker, he was winning the last major of the year, the PGA Championship wire-to-wire. As great as Furyk was today, Walker played that poorly. He shot a +1 on his front, and then four-putted the 14th green, good for a triple-bogey. He finished the day +4, a tie for 139th.

Walker’s big problem was accuracy off the tee. It seemed like he couldn’t miss at Baltusrol, but in his first round since that breakthrough major, Walker only hit five of 14 fairways.

A good performance this week is critical for those on or near the top 125 of the FedEx Cup standings. Those top 125 will be invited to continue their season at the Barclays, while those on the wrong side are done until the Fall Series.

After one round, Shawn Stefani is projected to make the most significant jump: 133 to 122. Kyle Stanley is the current “bubble boy” projected to jump from 127 to 125 after a one-under 69. Going in the wrong direction, Matt Jones and Whee Kim are currently projected to fall short.

In a tight race to represent the U.S. in the Ryder Cup, Brandt Snedeker (-5), Patrick Reed (-4), Rickie Fowler (-3), and J.B. Holmes (-2) made positive moves playing in front of captain Davis Love III.

Scott Piercy, currently 13th in the Ryder Cup rankings, shot a disappointing round of even-par, and needs to play much better tomorrow.

“I played really great today, hit it well, made a lot of putts, which that putter has not been all that hot this year. It was nice to see a lot of putts go in, usually over the years, that has been a strong part of my game, but I felt like I really found something.”
–Kevin Na, first round co-leader