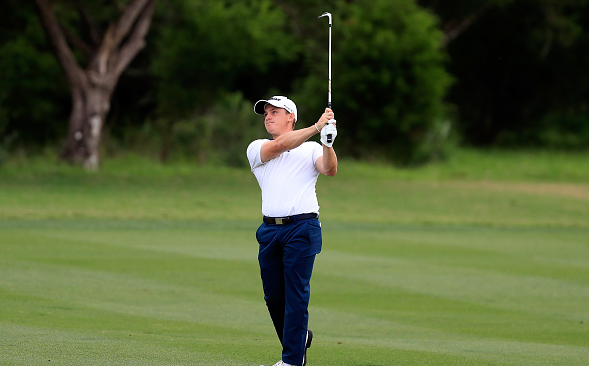 With wind picking up in San Antonio, the leaderboard at the Valero Texas Open is barely recognizable compared to yesterday. Round one leader Branden Grace was one-over and is now T10.

That is much better than some of those who played great in round 1, with Will MacKenzie going from T2 to missing the cut, while Stewart Cink and Steven Alker, tied with MacKenzie yesterday, also took enormous tumbles down the leaderboard.

The new co-leaders were barely on the radar after round one; Bud Cauley shot -6 in round 2, while Tony Finau did one better at -7, and now both are at -8 for the week. The unlikely duo leads Cameron Smith, 51-year-old Bob Estes, Kevin Chappell, and Robby Shelton by one stroke.

Cauley and Finau had similarly great rounds, but took different routes to get there. Cauley birdied 2, 3, and 4 and managed to keep the form the rest of the day, shooting a bogey-free six-under 66. He has just one bogey in two rounds, and is T5 in both fairways hit and greens in regulation.

Finau, on the other hand, has been very aggressive. In his second round seven-under 65, he carded eight birdies and an eagle, although also had three bogeys. Through two rounds he leads the field with 14 birdies, and has cancelled out some of that with six bogeys and a double. Finau has hit fewer that half his fairways, but has been very accurate approaching the greens.

Cauley is coming off a T9 at last week’s RBC Heritage, while Finau’s best finish this season was a T4 at the Valspar Championship.

Going Low In Round 2

Tying Finau for low round of the day was Australian Cameron Smith. The 23-year-old played his final six holes in five-under (3 birdies and an eagle) for his seven-under 65. He is now in a tie for third place.

The career of Sweden’s Carl Pettersson has fallen off a cliff over the past few years, as the five-time Tour winner has plummeted all the way to 901st in the world, and has made just 3 cuts in 14 events in the current season, one year after only making 5 cuts in 22 events. At least for one day, however, Pettersson looked like his old self. With just one bogey compared to seven birdies, a six-under 66 jumped him into the top 10, raising him 84 spots in the process.

Andrew “Beef” Johnston was also able to make a considerable jump up the leaderboard, as his three-under 69 led to a 64-spot jump. At even-par, Beef will need to stay dialed in over the weekend, but being eight strokes back gives him a prayer.

Dropping Down the Board

Patrick Reed, the highest ranked golfer in the field, was thought to have perhaps broken out of his recent slump with a 3-under 69 in the first round. After an atrocious second round, however, it is clear that something is still wrong. Reed had just one birdie, which was sandwiched in between two bogeys. He finished at five-over 77, dropping him down a whopping 74 spots on the board, and causing him to miss the cut.

Will MacKenzie was one stroke worse than Reed, and had a one-spot bigger drop. His six-over 78 knocked him down 75 spots, and he missed the cut entirely.

Steve Marino had a similar fate as well. After a five-over 77 highlighted by two back nine double-bogeys, Marino dropped from a tie for 6th to a tie for 77th. He too, missed the cut.

One of the big storylines for the Valero was the Tour status of veteran Ian Poulter, a popular player who has had a tremendous career in Europe, in addition to a fair amount of PGA success.

On the last start of a major-medical exemption after he missed most of last season with a foot injury, Poulter needed to make $31,000 in San Antonio to keep his PGA Tour card. He put himself behind the eight-ball after a three-over 75 in round one. He went low in round 2, like he needed to, but not low enough. Four front-nine birdies was impressive, but three of those happened immediately or almost immediately after bogeys, leaving him at -1 at the turn. His back nine was less tumultuous: he scored par on every hole.

The one-under 71 left Poulter at +2 for the tournament and more importantly, short of the cut line, meaning he will lose his full-time Tour status.

The 41-year-old Ryder Cup wizard has seen a steady fall in his career since its apex in 2009-2010. He has not won on Tour since the 2012 WGC-HSBC Champions, and it appears that his declining results have finally caught up with him. Poulter is unlikely to have trouble nabbing sponsor’s exemptions, but it is not something he wants to depend on.

“I played really well, probably even hit it a little better yesterday, but didn’t quote convert on some of the putts, and today I putted really well, which kept me going through most of my round.”
–Bud Cauley, second round co-leader