The LPGA Tour’s 2018 season wraps up this week with the CME Group Tour Championship at Tiburon Golf Club in Naples, Fla.

Along with the crowning of the champion of the tournament finale, several season-ending awards, including the Race to the CME Globe are still up for grabs.

The Race to the CME Globe is the LPGA Tour’s version of the FedExCup, a season-long points competition.

The field will include the top 72 LPGA players in the points standings, headlined by world No. 1 Ariya Jutanugarn.

The title sponsor is the CME Group, a financial securities corporation based in Chicago.

The inaugural winner was New Zealand’s Lydia Ko, who posted a 10-under and beat Carlota Ciganda and Julieta Granada in a playoff. The next two contests (2015 and 2016) were won by Cristie Kerr (-17) and Charley Hull (-19), respectively.

The tournament has been played at Tiburon Golf Club’s Gold Course since its inception, dating back to the CME Titleholder’s final edition in 2013, where Shanshan Feng edged Gerina Piller by a stroke.

Lexi Thompson missed a tap-in two-footer for par on Tiburón Golf Club’s final hole, opening the door for Ariya Jutanugarn to finish birdie-birdie and win the CME Group Tour Championship by one stroke over Thompson and Jessica Korda.

Despite the final-stroke mental lapse, Thompson’s T2 finish gave her the season-long Race to CME Globe title, and its $1 million bonus. She also took home the Vare Trophy for the season’s low scoring average.

THE RACE TO CME GLOBE

The Race to the CME Globe is a season-long points competition in which players accumulate points in official LPGA tournaments. Following the Blue Bay LPGA – the season’s 31st stop, the top 72 LPGA Members, as well as any non-member winners and any alternates, in the Race to the CME Globe points standings were seeded into the championship field.

For the top five players, it’s easy – win the CME Group Tour Championship and walk away with the $1 million bonus as well. Players ranked from No. 6 to No. 12 also have a mathematical shot, but it gets dicey laying out scenarios.

PLACE YOUR BETS ON THE CME GROUP CHAMPIONSHIP AT BOVADA 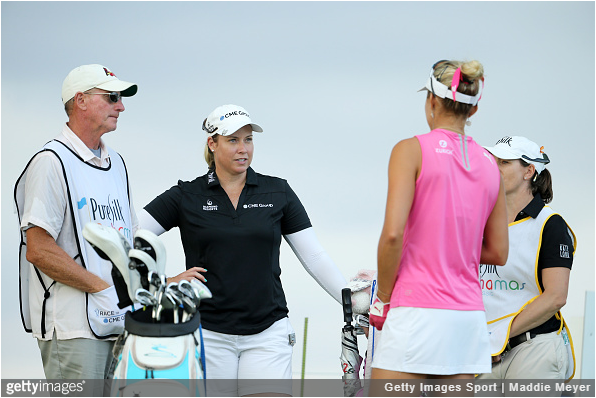 The CME Group Tour Championship is the final tournament of the 2018 LPGA Tour season.

The Tour will go on a two-month-plus break and return at the end of January 2019 to kickoff the new season with the Pure Silk Bahamas LPGA Classic at the Ocean Club in Nassau.