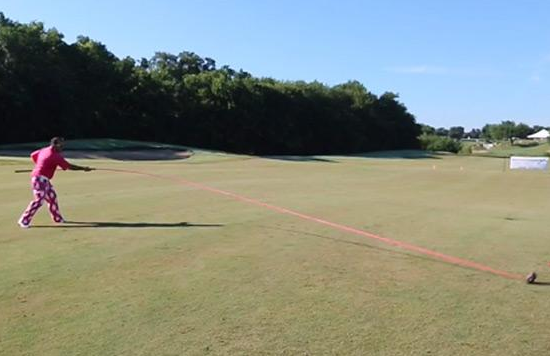 Down, But Not Out

Nike might be out of the golf equipment business, but that did not stop them from landing a big fish with their apparel: World #1 Jason Day, according to ESPN:

Hype Video of the Day

Evian put out a video featuring defending champion Lydia Ko to get people excited about the Evian Championship, the fifth and final LPGA major of the year.

Impression of the Day

@EuropeanTour what you think of my @TheBig_Easy #Impersonation?? Does it make #SeasonPass? pic.twitter.com/APXR3w5UuQ

Question/Answer of the Day

Graham DeLaet was asked about playing in the wind. He had a good answer for the fan.

@GrahamDeLaet Is it okay to play golf in the wind? What about 45 mph? Maybe 20 mph? #askingforafriend #sarcasm

Unless it's a tournament, it's auto beers in the clubhouse watching sports. https://t.co/MgyBqneqy5

Driver of the Day

The record for longest driver has been set. We would like to see what Jamie Sadlowski could do with it.

Stick to your day job, Jim ??#MNF is BACK! https://t.co/8HGUOZPbjR @steelers pic.twitter.com/WlaB0YKQgn

Good effort from Furyk, but there was no way he was winning that.

American Ryder Cup Captain Davis Love III made three of his four Captain’s picks yesterday, selecting Rickie Fowler, J.B. Holmes, and Matt Kuchar. Among the options he has for his final pick, these are the most likely:

Thomas is no doubt a great young talent, and he seems like he would be a good locker room presence. He is also close with at least Jordan Spieth and Rickie Fowler, so chemistry is a positive for him as well. He has had a great year with a win and four third-place finishes, but he lacks experience has not contended at a big time event (although he finished T13 at last year’s BMW, and top 20s in the past two Barclay’s), so it would be a bit of a gamble.

Another talented youngster, Berger has lately been getting hype as a potential pick for DL3. He has a win and six top 10 finishes on the season. Similar to Thomas, his inexperience is a potential knock, and while he has had a tremendous season, his more recent results have been less impressive since an awful final round at The Travelers Championship where he dropped from 54-hole leader to T5.

If Love wants experience, Furyk has plenty of it, although his Ryder Cup record has been questionable. Missing time with a wrist injury is hurting him, as he was unable to qualify for the Tour Championship, and will have to hope his resume up to this point is good enough. He was T2 at The U.S. Open and shot a 58 at The Travelers.

Ryan Moore is finally transmuting his amazing talent into tangible results, with a win and two other top-10s in his last five events. He hasn’t missed a cut since mid-May. Lack of big time tournament results could hurt, as he was a non-factor in the major season.

The surprise snub of DL3’s first set of Captain’s picks was Bubba Watson. The #8 golfer in the world Watson is the highest ranked American who is not currently on the team. The two-time Masters winner would bring distance, experience, and personality to the Ryder Cup team, but his recent form is in question, as he has not had a top 10 since early March.

Andrew ‘Beef’ Johnston is a favorite of young fans at a Web.com tour event.

Beef is on his way to Boise, with a gallery in tow. ⛳️ https://t.co/fW1iVXUnSF

Compliment of the Day

.@Chris3Wood with the ideal line from the tight 4th tee.

Italy’s Eduardo Molinari had an interesting lie for this shot.

Hopefully the last time I'm behind a tree this week! #ItalianOpen @openditaliagolf

Perk of the Day

When you play on the European Tour, you eat well. Rikard Karlberg was taken back by how impressive this buffet at the Italian Open was:

You know you are in Italy when you get a buffet setup like this! #iTalianOpen

Swing of the Day

Perfect form from Lexi Thompson, the longest hitter on the LPGA Tour, at the Evian Championship.