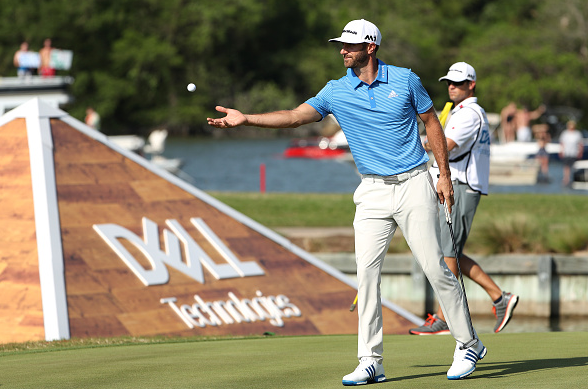 It is a great day to be South Carolina.

The University of South Carolina men’s basketball team upset Florida to make their first ever NCAA Final Four. That alone made it an incredible day for the Palmetto State, but achieved another victory in the late afternoon, when Columbia native Dustin Johnson held off a furious comeback from Jon Rahm to win the WGC-Dell Technologies Match Play, after defeating Hideto Tanihara in the semifinals.

While the basketball victory did come as a surprise, the golf one did not. Johnson, already the world #1 won his third consecutive start, and became the first player to achieve the World Golf Championships (WGC) Career Grand Slam. In a league with immense talent, DJ is solidifying his place as the best of the best.

Johnson 1-up over Rahm

Dustin Johnson opened up his semifinal match against surprise match-play assassin Hideto Tanihara the same way he opened his previous five matches in this tournament: by winning the first hole. That lead would only last for one hole, as Johnson three-putted the second hole for a bogey to square the match back up.

Tanihara bouncing back whenever DJ started to pull away was a theme in this match. DJ won 3, 6, and 7 (#6 was an eagle) to reach 3-up, but Tanihara came right back by winning 8 and 10, and then back-to-back birdies on 13 and 14 squared the match.

There would be just one birdie over the last three holes: DJ’s 2 on the par-3 17 that he had not played this week before this match proved to be the difference, as DJ sunk an 8-foot par putt on 18 to close the match after Tanihara missed his birdie try from 15 feet. This was Johnson’s only close call of the week, which says a lot about how great Tanihara was.

There was a feeling that his first day upset of Jordan Spieth was maybe a fluke, but he proved himself as a great head-to-head player with his later performances as well. Prior to Austin, Tanihara had just two career top-10s in 42 PGA Events, with a previous best of T5, which he achieved at the 2006 British Open.

Jon Rahm, like Johnson, had been winning convincingly all week, but he encountered some resistance in his match against former FedEx Cup winner Bill Haas. Haas delivered the first blow with a birdie on 3 to take a one-hole lead, but with Rahm birding the next three holes, winning two of them, after 6 Rahm was suddenly 1-up.

Haas won the next hole to square the match, and then neither would be able to get ahead of the other in the five-hole stretch from 8-12. Rahm finally hit the gas on 13, finishing birdie, bogey, birdie, birdie from 13-16, while Haas played the same stretch par, bogey, par, par.

Rahm’s seven-foot birdie putt on 16 was the clincher, as he went three-up with two to go, ending their fight.

Tanihara had eight pars on the front nine, and the one he did not par was special. An ace on the par-3 7th put him ahead by one, and he would add one more hole with a par on 9, to go two-up at the turn. Starting on the back however, it was nearly all Haas.

Haas took 10, 11, 13, and 14 (3 pars and a birdie) to snatch the lead, a lead he would not vanquish. When Tanihara missed a par putt from seven feet out on 17, it was all over, with Haas taking third, his best finish in nine events this season. In addition, it was Haas’ best ever finish in a WGC event.

The real winners of the semifinals ended up being the fans, as they were treated to an incredible final matchup, one that faced off the two most dominating players of the week. DJ was able to get out in front in every matchup this week, but in the final, something happened: he did not win the first hole.

With both players carding 4s on the par hole first, it was the first time all week DJ did not have the lead after 1. However, after matching each other one #2, Dustin Johnson did Dustin Johnson things, winning holes 3, 4, 5, and 6 to take a four up lead. He would go on to reach five-up after 8 holes, and put Rahm in a seemingly insurmountable hole against the world’s best. Rahm though, was not yet finished.

A birdie on 9 was his first won hole of the match, and he immediately added another hole on 10. After DJ took 12, Rahm went birdie, par, birdie, birdie to win three holes in a four-hole stretch. Trailing by just one going onto the last hole, Rahm hit his driver OVER the green on the 356-yard par 4 to give himself a good chance.

Unfortunately for Rahm, the sound of a door slamming hurt his chip shot, and he was unable to get the birdie he needed, as DJ calmly holed his short par putt to claim his first Match Play Championship.

What It Means For DJ

It can no longer be said that Dustin Johnson is “among the best” on Tour. Right now, it’s DJ and then it’s everyone else.

He has won three straight starts, the first to vault him to #1 in the world rankings and then the next two to cement that status. He becomes the first player to win every WGC event, something even Tiger hasn’t done despite 18 WGC wins.

He could take a three-tournament winning streak into The Masters in two weeks, although for now he is slated to play the Shell Houston next week, where he will likely be the favorite. Four wins going into the Masters would be some incredible momentum.

“I felt like I didn’t give him many holes except for 10; I three-putted 10. It was tough out there, the greens got really fast, the wind was affecting all the putts. Jon played really well, I just really didn’t give him anything.”
-Dustin Johnson, WGC-Dell Technologies Match Play Champion