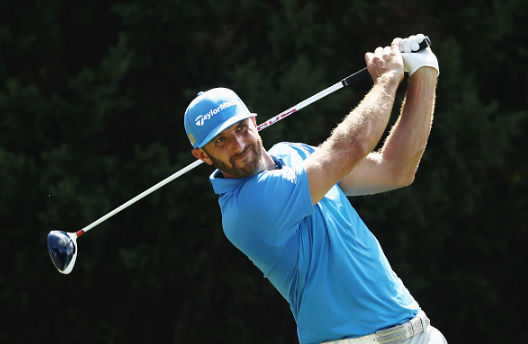 Thank God for Kevin Chappell. Without the respectable efforts of the 30-year-old American, Dustin Johnson’s dominance would make the final tournament of the FedEx Cup playoffs boring.

Johnson, the current FedEx Cup leader, and presumptive PGA Tour Player of the Year, had another great DJ-esque round, a three-under 67 to lead by one over Chappell after the second round of the Tour Championship.

Chappell is the only other player in the field within three strokes of DJ, and with world #1 Jason Day withdrawing with a back injury, DJ has one less elite golfer trying to gun him down. If the field doesn’t pick it up quickly, DJ may cruise to an $11.5 million payday.

Dustin Johnson’s three-under 67 tied Jason Dufner and Charl Schwartzel for the second best round of the day, and it could have been even lower.

DJ missed a short par putt on 17 and surprisingly did not birdie the par 5 18th. He was accurate off the tees, hitting 8/14 fairways for the second consecutive day, and hit 67% of his greens. Only Rory McIlroy has more birdies through two rounds.

Jason Day, the #1 golfer in the world, and one of the five players who would have claimed the $10 million FedEx Cup with a victory at East Lake, withdrew with a back injury, ending the playoff run of the man who spent most of his season at #1 on the FedEx Cup Standings.

Day also withdrew at the BMW two weeks ago, but he was expected to be 100% for the playoff finale.

Russell Knox had a disappointing round one, shooting 3-over 73, but whatever he was missing yesterday, he seemed to find today.

Knox’s four-under 66 was the low round in the field today, and he hit DOUBLE the greens that he hit in round 1 (6 to 12), and was tremendous on the greens gaining 3.78 strokes putting over the rest of the field. William McGirt’s one-under 69 was eight strokes better than his round 1 77. Unfortunately for him, he is still 3 strokes out of DJ’s lead.

For the second straight day, defending champion Jordan Spieth got off to a poor start, with two bogeys in his first two holes, but unlike yesterday, he was unable to rebound, finishing with a two-over 72.

His playing partner, Justin Thomas, needs a great week to get consideration for the Ryder Cup, but today was not the round he needed. A controversial penalty on the 11th hole led to a round of one-over 71. First round co-leader Hideki Matsuyama was also one-over, dropping him into a tie for third.

With 11 of the 12 spots on the American Ryder Cup team spoken for, a few players in the field are playing for more than the prodigious FedEx Cup prize money. Ryan Moore, a match-play specialist who has been hot lately is doing the best among that group, tied for fifth at 2-under par.

Thomas’ mediocre round puts him at -1. Daniel Berger (+3) and Bubba Watson (+5) are well back and will need great weekends to grab the attention of Ryder Cup Captain Davis Love III.