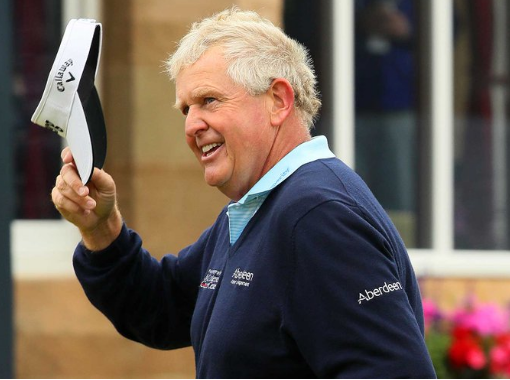 Phil Mickelson and Henrik Stenson have just teed off in the final round of the 145th Open Championship. For the moment it looks like a two horse race, but there is a lot of golf to be played. The wind has been howling for most of the day, but the forecasts call for much calmer conditions the rest of the day.

Here’s a quick recap from this morning.

There were plenty of good scores this morning and couple of stellar golf shots. But the BOSS this morning was definitely this guy.

Former Ryder Cup Captain, Colin Montgomerie, was the first man out this morning. In perhaps his last appearance at Royal Troon, Montogomerie shot a 4-over, 75.

Colin Montgomerie acknowledges the fans on No. 18 at Royal Troon after completing his final round. #TheOpen pic.twitter.com/zVsa7dMS0c

Runner up at the 2010 edition, Lee Westwood went in 4-under, 32 to shoot a 3-under 68 in some seriously tough conditions.

World No. 3, Jordan Spieth, was another player who out early and posted a low score. The highlight of his round was an eagle on the 4th.

.@JordanSpieth is two-under for the day after an eagle at the 4th. #TheOpen pic.twitter.com/alGlJ3RrkS

American Ryan Palmer holed out for eagle on the 6th hole. He had a decent outing as well, shooting a 1-under, 70.

Ryan Palmer holes out from the fairway for an eagle. https://t.co/5vUCcbBs5e #TheOpen pic.twitter.com/f6l5jYPSvY

This is Henrik Stenson’s first 54-hole lead at a Major, which also marks the first time that he’s played in the final pairing at a Major. For Mickelson, it’s his 10th time.

Henrik Stenson and Phil Mickelson have played together 14 times.

In 2013, Mickelson grabbed the Claret Jug and Stenson finished runners-up. Let’s wait and watch how these in store this time around.

Rory McIlroy is perhaps the hottest player on the course. He went out in 4-under, 32 before bogeying the 11th. Unless his round seriously derails from here, he’ll finish today’s round with 14 clubs.