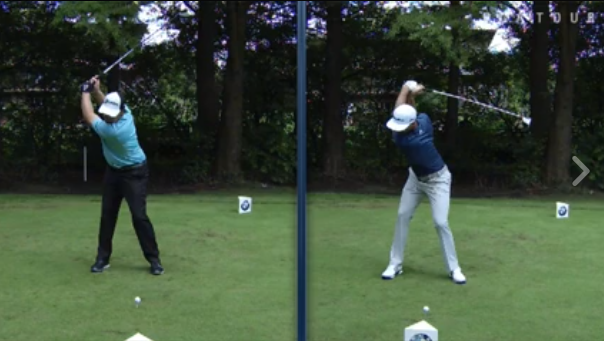 The side-by-side video of the PGA Tour’s no. 1 and no. 2 players in driving distance tells the story of incredible power.

On the left we have JB Holmes, PGA Tour’s no. 2 in driving distance at an average of 313.3 yards. Dustin Johnson on the right averages 314.2 yards, making him the no. 1 player in driving distance. The two players couldn’t have more of a different backswing.

Johnson’s is Daly esque with the club so far back he can probably see it out of the corner of his left eye. While Holmes is more upright with a much shorter backswing.

The incredible thing about both swings is that their impact positions are almost identical despite the differences in how the club got there.

It’s going to be fun watching these two bash brothers during the Ryder Cup.