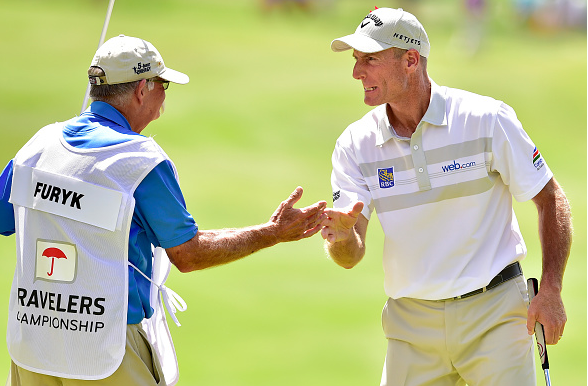 Jim Furyk shot a PGA Tour record 58 in the final round of the Travelers Championship at TPC River Highlands. Furyk had 10 birdies and an eagle with no bogeys.

After the round Furyk spoke to the press. Here’s some of what he had to say following his record-setting day in Connecticut.

PRESS: The first 58 in the history of the PGA TOUR. At what point did you realize you were in the midst of something historic?

PRESS: You are a lover of history in sports and of competition. Why will this mark be so significant to you?

JIM FURYK: There’s a lot of rounds by a lot of great players ahead of me that have never reached 58. To hold that record alone right now on the PGA TOUR at least, I know a young gentleman just did it on the Web.com, but to hold it here on the PGA TOUR is phenomenal. To have a little small place in history is simply a dream.

PRESS: Three years ago you shot 59 at Conway Farms. How did that help you today?

JIM FURYK: Well, I had that here-we-go-again turning the front nine. I shot 8-under on the front nine there, 8-under today. I remember the mental battle, the grind. Same thing, I kind of got off to a good start on the second side at Conway, as well, and then it was more of a — you know, I’m hitting it well, I’m putting it well. It’s just trying to find a way to stay out of your own way really and don’t let any thoughts leak in. I left the first putt a little short at 17 and had to grind over a little left to righter, but for the most part, it was pretty — I think I hit every fairway and every green today, so it was a better — it was tougher conditions at Conway, but a little smoother round of golf today than there.

PRESS: Earlier in the week you called your father for a little bit of help. What advice did he give you?

JIM FURYK: We worked on a lot of different things. We worked on my setup. Yesterday I was on the range, I went and hit a big bag of balls and was just frustrated. Hit the ball actually poorly yesterday. Shot 2-over par and was just frustrated, and even though I’m taking a week off, I didn’t want to go out there today and mail one in somewhere around par or over par. I wanted to work on some things, and we worked a little bit — I asked him some questions.

I actually have never done this before, I took a couple pictures, had Mike take a couple pictures of my swing, sent it to him, was asking about the length of my swing. The golf course at the PGA was long and it played wet, and it was taxing for someone that hits it short like me. I think my swing got a little long. Because of that, my upper body and lower body were out of sync, and I tried to kind of shorten it up or tighten it up a little today, and honestly right from the go, everything was easy, everything was going right at the flag, and as I said, it was kind of — I put it on cruise and tried to stay out of my own way mentally.

PRESS: We saw you working the phone a little bit earlier. Who have you been able to talk to so far?

JIM FURYK: I had — well, my pocket is still buzzing. I had 85 messages when I walked out here. I think it’s rang at least five to ten more times. I need to change my flight right now if you all are keeping me around. So that’s first and foremost is get a hold of my wife and say hello and try to get that flight changed, and obviously I want to talk to them.