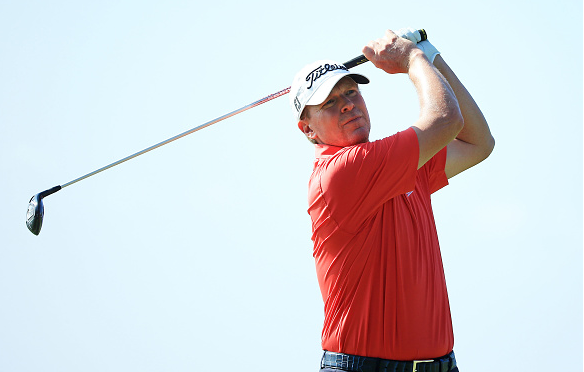 Jerry Kelly & Steve Stricker teamed up for a 16-under 56 in the first round scramble, and lead the Franklin Templeton Shootout by a single stroke over the duo of Harris English & Matt Kuchar.

The defending champs of Jason Dufner & Brandt Snedeker are only 4 shots back at 12-under, and are tied for 4th place with two other teams.

Round two of the Shootout tees off tomorrow at 10:40 AM, and will be a Modified Alternate Shot format.

Here’s a quick recap of day one at Tiburón Golf Club.

Chip-in of the Day

Harris English chips in for birdie on the 16th hole. And gets a nice slap five from partner Matt Kuchar.

It feels nice to connect with the pin.

It feels even nicer to connect on 3 high fives after the fact.#QuickHits https://t.co/UQGztUimqr

Eagle of the Day

Lexi Thompson with an eagle on the par-5 17th. The LPGA star hits an iron 200 yards to the green and then makes a clutch putt.

Lexi’s partner, Bryson DeChambeau, with the putt of the day – a side-saddle long bomb.

Team Marketing of the Day

Bryson and Lexi are both young stars, and also just happen to be part of the Cobra/Puma team.

Double tap if you're rooting for @Lexi and @brysondechambeau at the #FTshootout this week. #CobraGolf

Excited to get things started tomorrow at the @FTShootout! Implementing a new style of putting this week that I believe will enhance my performance and help me compete at a higher level. Going to be fun out there with @lexi. Let's kill it!