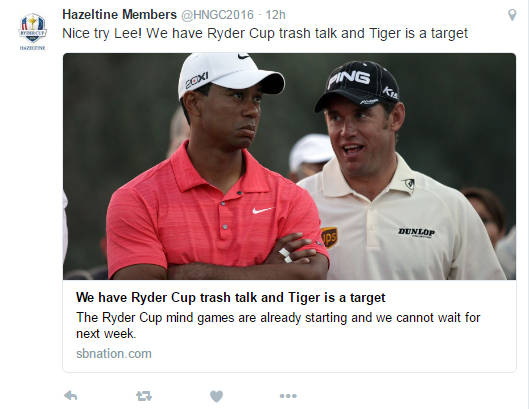 Mine was a headline writer sensationalising an article. I'm not sure what this is??. A visit in front of captain & committee maybe! https://t.co/qbp6jdIpSV 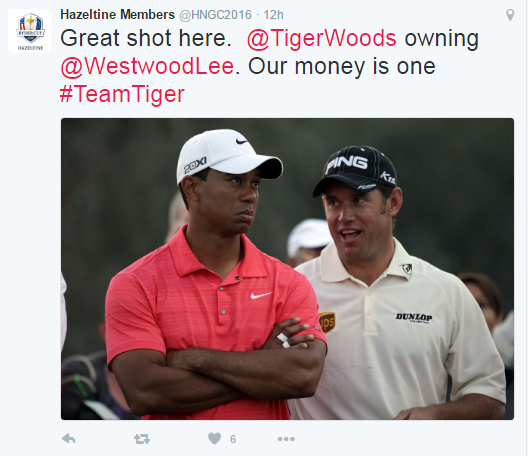 I wouldn't have expected online trolling of Ryder cup players from members of the host venue.

(UPDATE: @HNGC2016 has since deleted their tweets)

It all stems from an article written in ESPN UK, where Westwood had some unsavory quotes about the US Ryder Cup team and their use of Tiger Woods. Westwood said, among other things, that having Tiger Woods as vice captain may have “adverse effect” on the team.

Well the internet did what the internet does and created a bit of drama out of nothing, with some headlines saying Westwood “fired shots” at team USA. Nothing Westwood said was really offensive, he was merely speaking from experience and asking questions that others had asked before him.

The Hazeltine members twitter account took that and ran with it. In their defense, they were probably just trying to create some excitement. Westwood, clearly was not a fan. Here’s the Ryder Cup veteran explaining a little bit more about his frustrations:

@mickfitzg @HNGC2016 @TigerWoods not sure Fitz but it’s not really upholding the spirit or traditions of the Ryder Cup is it?

@MattGinellaGC @GolfDigest spot on Matt. Typical sensationalising from headline writers . I suppose they have to sell mags somehow though.

@jlaheta76 @MattGinellaGC @GolfDigest thanks Jeffrey. I was only recalling what had been said in the past and applying common sense to it.

Ryder Cup competition is a week away but the drama is already heating up!