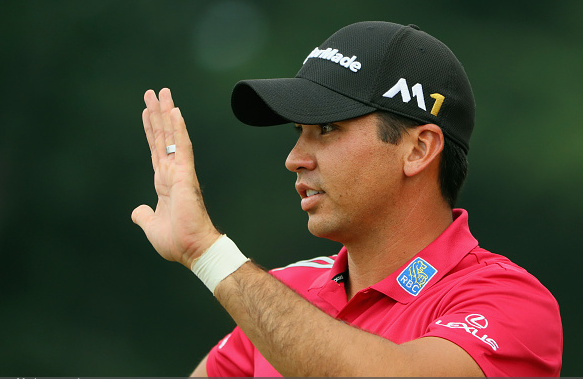 With weather suspending play during round number three at Baltusrol on Saturday, Jimmy Walker and Robert Streb will head into Sunday as the co-leaders at 9-under.

Here’s a round up of quotes and photos from some of the more notable players, following the suspension of round number three.

“Yeah, kind of a long day trying to figure out what to do. Obviously the course looks like it is unplayable. Everything is underwater, regardless of whether the lightning stopped. I guess just go home, hang out with the family and might be waiting around tomorrow morning, too.”
-Robert Streb, T1 at -9

” I think the plus side was that I didn’t actually have to go out. Obviously if you get off to a bad start, you’re thinking about it, and vice versa is if you get off to a good start, you’re thinking about it, as well. I haven’t hit a golf shot today, so hopefully we can get it in over the next day or so. It would be nice to get the 72 holes in.”
-Jason Day, T3 at -7

“Just wish I could sleep in. Not going to get to sleep in. It will be a wake-up call in the 4:00s. It is what it is. Looks like there’s a chance this could go into Tuesday. So just kind of be as patient as possible and when we get out, we get out, and just try and take advantage when you can. But there’s not going to be the same kind of rhythm and flow; as much as you accept that and kind of change your game plan to let’s go ahead and get out there and pretend like we are, probably the best-case scenario.”
-Jordan Spieth, T18 at -3

“Not much. It’s one of those things, if you know it’s going to happen at some point, you just prepare for it and just make sure that you just restart whenever the time comes, whenever you have to actually go back out. I think that’s the biggest key is not doing too much walking around, not doing too much to exert too much energy.”
-Patrick Reed, T6 at -5

“Unfortunately I feel like I’ve been swinging really well the last couple days and had a really good warm-up this afternoon, so I was looking forward to getting out there and getting after it. Obviously weather through the summer we always deal with and you play when you get to play. So go back, rest up, get some food in and be back out early tomorrow morning.”
-Rickie Fowler, T10 at -4