The European Tour starts its two-tournament Dubai swing with the 14th edition of the Abu Dhabi HSBC Championship in the United Arab Emirates.

The tournament, contested at the Abu Dhabi Golf Club, is one of three consecutive events in the Middle East to kick off the European Tour’s 2019 calendar year, alongside next week’s Omega Dubai Desert Classic and the new Saudi Arabia event.

The field of 128 players is headlined by top stars, including Brooks Koepka, Dustin Johnson, Tommy Fleetwood, and Henrik Stenson, among others.

Then called the Abu Dhabi Championship, the tournament was first contested in January 2006 at Abu Dhabi Golf Club, which has hosted the event since its inception.

The creation of the tournament was part of the European Tour’s effort to expand into Asia, and is part of a fivesome of Tour events played in the Arab states of the Persian Gulf, alongside the Dubai Desert Classic (founded in 1989), the new Saudi Arabia event (2019), the Qatar Masters (founded in 1998), and the DP World Tour Championship (founded in 2009).

Despite its limited history, the champion’s list is impressive, headlined by three-time winner Martin Kaymer, and Paul Casey, a two-time winner. Tommy Fleetwood (2017) and Rickie Fowler (2016) were the two most recent winners.

The 27-year-old star finished with a single blemish against eight birdies, highlighted by six on his home-nine, en route to a 22-under-par-total.

Fleetwood started the day two off the lead, and when Fisher turned at 32, the Race to Dubai champion found himself five shots back with nine to play.

However, Fleetwood began home with a birdie on No. 10, and when coupled with a bogey by Fisher, the momentum swing was clearly in the air. The defending champ was down just three with eight remaining.

Starting on No. 12, Fleetwood reeled off four birdies on his next five holes (12-16), while Fisher finished the same stretch at even-par, producing a four-shot swing and a one-shot lead for the Southport, England native.

A final birdie on 18 gave Fleetwood a two-shot cushion, and when Fisher failed to eagle, it was a two-shot victory.

“It was pretty good on that back nine really. I think at the turn, it was just a few shots – the up-and-down on ten, the up-and-down on 11, 13, got a bit lucky with the tee shot,” said Fleetwood, who, with the win, moves into the top 10 in the world rankings. 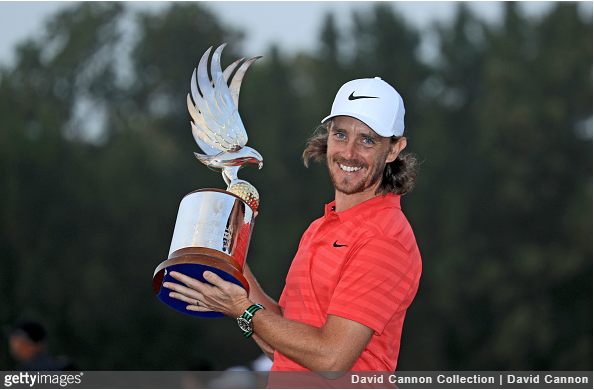 “When putts were going in like 15 and 16, you just feel like, could this be my day again. Then 18, I mean, forget the second shot, the up-and-down was one of the best up-and-downs I ever made. So happy days.”

The field this week in Abu Dhabi is headlined by a trio of American Ryder Cup stars in Patrick Reed, Dustin Johnson, and Brooks Koepka, alongside a fivesome of winning Cuppers from Europe in Tommy Fleetwood, Henrik Stenson, Ian Poulter, Thorbjorn Olesen, and Tyrrell Hatoon.