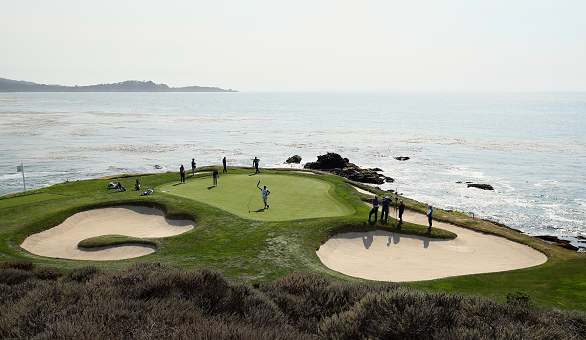 When most people hear the word “California,” their minds instantly take them somewhere with gorgeous coastal landscapes and a myriad of celebrities. Fortunately for those who are infatuated with that kind of thing, the PGA Tour’s stop this week, the AT&T Pebble Beach Pro-Am has an incredible combination of both, in addition to many other aspects that make both golf and California amazing.

Pebble Beach Golf Links, unquestionably the most popular public course in the United States, and arguably the most popular period, is the host to the annual event. The three courses that make up this tournament (Pebble Beach, Spyglass Hill, and Monterey Peninsula for the first three rounds before heading back to Pebble for round 4) brings a formidable challenge for the strong field it brings in each year.

Not only will many of the world’s best golfers be there, including world #1 Jason Day, world #2 Dustin Johnson, and five-time major winner Phil Mickelson, but it brings a lot of the world’s best in the sports and entertainment industries as well for the famed pro-am.

It is an event that was originally hosted by the legendary Bing Crosby, and one would have to believe that he would be proud of what it has become. It is the tournament that truly has something for everyone.

Hosted by Bing Crosby, which led to the tournament nickname “The Crosby Clambake”, the inaugural 1937 tournament was an 18-hole event, but as the years progressed and its popularity increased, more rounds were added, and within 20 years it was a full 72-hole event.

That first tournament in 1937 was won by Sam Snead, and over the years it’s boasted such champions as Ben Hogan, Jack Nicklaus (3 times), Tom Watson (twice), Tiger Woods, and Phil Mickelson (4 times).

The only man with more Pebble Beach Pro-Am titles than Snead and Mickelson’s four is two-time major champion Mark O’Meara. The course is also famous for being the site of Tiger Woods’ 15 stroke obliteration of the field at the 2000 U.S. Open, one of the six times a major championship was hosted by Pebble Beach.

Since 1947, the Pebble Beach Pro-Am has been played among three courses. Those courses have changed a few times over the years, but currently the other two courses along with Pebble Beach Golf Links, are Spyglass Hill Golf Course and Monterey Peninsula Country Club.

The defending champion of the Pebble Beach Pro-Am is Vaughn Taylor. An alternate without Tour exempt status at the time, Taylor produced one of the best stories of the year in 2016, when he took Pebble Beach for his first victory in ten years.

Six strokes behind third round leader Phil Mickelson, Taylor shot a final round 7-under 65 to win by a shot. Mickelson missed a five-foot birdie putt on 18 that would have forced a playoff.

One of the biggest fan draws to the AT&T Pebble Beach Pro-Am is the inclusion of celebrities, who will be playing alongside the PGA Tour golfers. Here are a few of the more notable ones:

One of the biggest surprises of the Farmers Insurance Open, which took place two weeks ago at Torrey Pines in San Diego, was the large number of big names who missed the cut. The biggest of those names were world #1 Jason Day and world #4 Dustin Johnson.

Neither played at last week’s Waste Management Phoenix Open, and both are hoping the practice hours they have put in will get their early seasons back on track.

Day was +3 after two rounds at Torrey Pines – three shots short of the even-par cut line. It was his first missed cut in a year, which coincidentally was at the very same tournament.

Between those two MCs, Day had seven top-five finishes, including three wins. Even as the world #1, however, it may still be forgivable considering it was just his second tournament back since he had to withdraw from the Tour Championship in September with back trouble.

In his first tournament back, Day finished T12 at the 32-man SBS Tournament of Champions in early January. If he is going to kick start his season soon, Pebble Beach is a good place. He has finished T11, T4, and T6 in his last three appearances.

Johnson, the reigning PGA Tour Player of the Year, who has been ranked as high as #2 as recently as the Tour Championship, was just one stroke better than Day at Torrey Pines, shooting +2 over 36 holes.

Since the beginning of the 2015 season, DJ had 15(!) top 10 finishes and just one missed cut – at the PGA Championship when his first round got away from him (the 77 was his worst round of the season).

Over those two days at the Farmers Insurance Open, he bogeyed 10 holes and only hit 10 of 28 fairways. In his previous tournament, also the Tournament of Champions, DJ was -15 and finished T6.

Pebble Beach has been even better to DJ than it has been to Day, as he’s won twice, going back to back in 2009 and 2010, and has three other top-five finishes since. It was also the site of one of his big major collapses – the 2010 U.S. Open where he held the 54-hole lead, but shot a final round 82 to finish well behind the winner Graeme McDowell.

Vaughn Taylor’s improbable come-from-behind victory came as a shock to most. Going into the tournament, Taylor had not won on Tour since 2005, and was coming off a two-year stretch where he only played 15 PGA events.

He was trying to get his Tour card back through the Web.com Tour, and had to withdraw from the previous week’s event in Colombia due to an illness. He made the Pebble Beach field as an alternate, and his phenomenal final round led to a life-changing victory.

It has been difficult to gauge exactly where Taylor’s game is since. He missed his next five cuts and did not finish another tournament under par until late July. Since then, however, he has made a very respectable 13 of his last 15 cuts, with his best finish in that stretch being a T15 at the season-opening Safeway Open. If he can build on the made cuts, it is possible he could contend again in his title defense.

Phil Mickelson is perhaps in the twilight of his stellar Hall of Fame career, which has included an incredible 42 victories. Four of those victories were at the AT&T Pebble Beach Pro-Am with the most recent one coming in 2012, which puts him one behind Mark O’Meara’s five.

He is assumed to be in his twilight based on his age (46), but based on play, he doesn’t look like he is mailing it in until he is old enough to qualify for the Champions Tour. He had three runner-ups in 2015-16 and looked as great as he ever has at the Open Championship and the Ryder Cup.

Despite a handful of high finishes over the past few years, Mickelson is anxious to end a victory drought that has been going since his surprise win at the 2013 Open Champions.

If he is going to end it soon, Pebble may be the place. He was in prime position to win #5 last year as he was the 54-hole leader, but a disappointing final round even-par 72 ended in another runner-up finish. His last hole was especially dejecting, as he missed a five-foot foot that would have forced a playoff.

Mickelson has played well as of late, and especially well for someone coming off of two offseason hernia surgeries. He was T16 last week in Phoenix, T14 the week before at Torrey Pines, and T21 the week before that at the CareerBuilder Challenge.

Other Notables In The Field

This will be the 2017 debut for Furyk, who is coming off a season that was as up-and-down as they come. He missed months with a wrist injury, was unable to qualify for the last two events of the FedEx Cup Playoffs, and did not make the Ryder Cup team, missing on points and being passed over for a Captain’s pick.

On the plus side, however, Furyk posted an impressive T2 at the U.S. Open at a very difficult course, and at the Traveler’s Championship, his final round 58 was the single lowest round in PGA history. He did not play in last year’s Pebble Beach Pro-Am, but was T7 in 2015 after chasing a third round 63 with a final round 74.

Spieth, the 23-year-old phenom, who already has two major wins under his belt has gotten off to a strong 2017. In three events, he has two third place finishes and a T9.

Top 10s may not be enough to satiate the world #6, who is looking to get back on top of the golf universe like he was in 2015, when he won five times and was named PGA Tour Player of the Year. He has played the past four AT&T Pro-Ams, finishing in the top-25 of all four with a best result of T7 two years ago.

Likely the best European player in this tournament, the former U.S. Open winner and Olympic Gold Medalist Rose has gotten his 2017 off to a tremendous start with a runner-up finish at the Sony Open and a T4 at the Farmer’s Insurance Open.

While he played well last season, it was his first in seven years without at least one victory. Judging by his first few events of the new year, he looks determined to begin a new streak. He was T6 at Pebble Beach last year, a great finish for his debut appearance.

Still looking for that first major, Matt Kuchar, the top 10 machine, was T9 in his 2017 debut last week in Scottsdale. He had 10 top-10s in the 2015-16 season, including three third place finishes.

Kuchar played in every Pebble Beach Pro-Am from 2001-2010, with a high finish of T6 in 2007, but this is his first appearance since withdrawing after two rounds of the 2010 tournament.

Many wondered if there would be a let-down in Phoenix after the 22-year-old broke through for his first PGA Tour win at Torrey Pines the week prior. He responded with a T16 that included a third-round 65 where he birdied six of eight holes on the back nine.

This will be the first appearance at Pebble Beach for Rahm, who turned pro after last year’s U.S. Open. It is difficult to imagine that he won’t be up for the challenge.