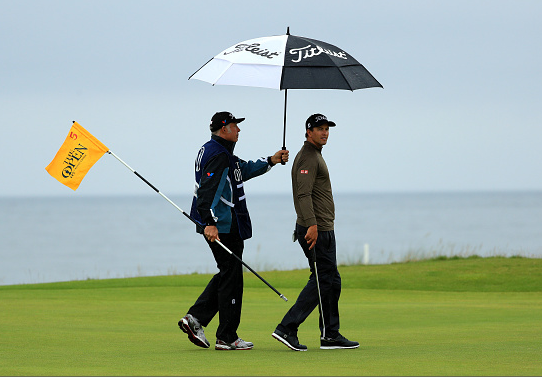 The second round of the 145th Open Championship is about in the books, with 5 time major winner Phil Mickelson (-10) holding a 1 shot lead over Henrik Stenson (-9) at Royal Troon in Scotland.

Here’s a round-up of quotes from some of the top golfers on the leaderboard.

“I really like the challenge this weather and these elements provide. I made one or two bad swings that led to bogey but for the most part I kept the ball in play and played stress-free golf.”
Phil Mickelson, leader at -10

“I’m 40. I’m not going to play these tournaments (Majors) forever and ever. I don’t have another 50 goes at them. It might be a dozen or 15 in total so I have to start putting myself in position. I haven’t done that in the last six Majors so it’s time to getting going.”
Henrik Stenson, T2 at -9

“It’s cool seeing your name on the leaderboard. On Monday, for a bit of fun, I actually snuck up to the leaderboard on 18 with a couple of guys and put our names up. I’m probably going to get into trouble for that.”
Keegan Bradley, T3 at -7

“I feel like my best game is in front of me. It (trying to retain the title) is irrelevant, I haven’t really felt any more pressure, if I am to be honest with you.”
Zach Johnson, T5 at -5

“I love it, I dreamt of it as a kid, man. Playing in these events and people shouting your name, I absolutely love it.”
Andrew “Beef” Johnston, T6 at -4

“In America, if it starts raining, you get called off the course. Here you play.”
Charl Schwartzel, T6 at -4

“Some good weather would be nice.”
Adam Scott, T27 at E