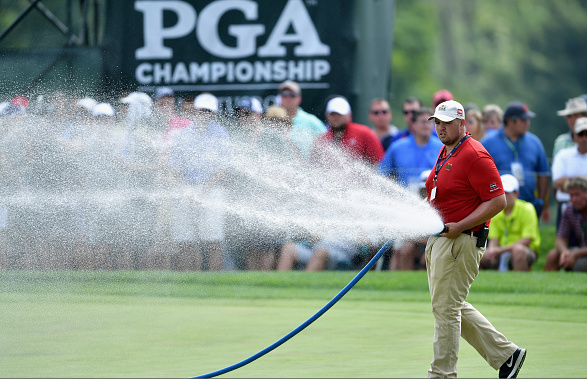 Here’s a round up of quotes and photos from some of the more notable players in the field.

“To start off playing just solid, lots of fairways, lots of greens, got some putts to go in, hit some
quality second shots into greens, and had not been making a lot of putts this year. The last weekend and today, I felt like I was gaining some momentum and starting to see some go in. So it was nice to keep that rolling today. It’s felt good.”
–Walker, Leader at -5

“I feel like I played pretty solid golf. I drove the ball from the fairway a lot and was able to put myself in good spots. Any time you can do that, you are going to do well. Just need to clean up a few things. Don’t want to say rust, but a little bit more touch control on the greens and a couple more putts fall and just simple stuff like that.”
–Koepka, T8 at -2

“Definitely happy with today’s round. I mean, anything in red numbers is always nice to start off a major. It was great scoring conditions this morning. If you drove the ball well, you were able to play aggressive at times. It was nice.”
–Fowler, T8 at -2

“Played good today. Drove it very nicely and hit a lot of good iron shots. I just didn’t capitalize on the opportunities that I had out there and it’s not disappointing. It is what it is. I haven’t had the greatest — I guess I haven’t had the greatest putting display over the last three weeks that I’ve played. I think that shows a little bit in the results. But for the most part, I feel pretty good about where my head is at and looking forward to the next three days. Hopefully we can skirt the weather and be able to get this thing in.”
–Day, T8 at -2

“I was excited to play and compete again and not have to have a month off for preparation. Unfortunately, I don’t do well not playing the week before. I do much better when I’m playing the week before a major. You kind of saw it today. I hit terrible shots the first 11 holes. I’m pleased that I was able to turn it around though and make some coming in.”
–Mickelson, T57 at +1

“I was right in the middle of the fairway with 120 yards to go on the fourth hole after making a good up-and-down on the hole before and missed the green to make five. Then followed that up with another bogey, and then from there, I was always just trying to chase a little bit. I knew I had the two par 5s coming up on the last two holes, our first nine. Not to birdie those was disappointing after putting them in a position where I could make four. Yeah, as you say, just not a lot of momentum out there. But I’m happy with my game from tee-to-green. Driving the ball as well as I have, ever, I think. Iron play feels good. Just when I get on the greens, it’s just a different story. I’ll need to try and figure it out for tomorrow. You know, try to shoot something in the mid 60s and get myself back into it.”
–McIlroy, T125 at +4