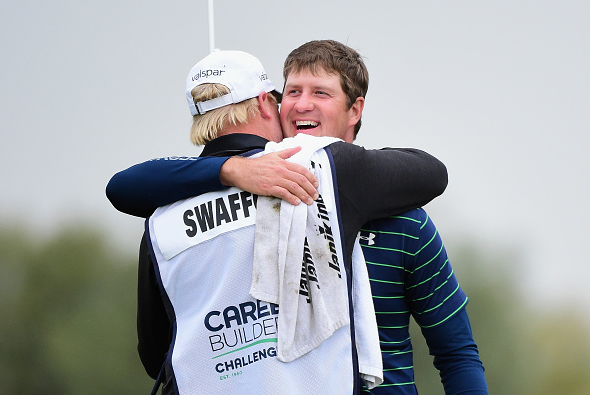 After two consecutive weeks where Justin Thomas took nearly all the drama out of the final round by winning in runaways, PGA Tour fans had missed exciting finishes.

They sure got one today.

Hudson Swafford birdied 15, 16, and 17 to emerge from a logjam and win the CareerBuilder Challenge by one stroke over Adam Hadwin, who stole all of Saturday’s headlines after becoming the eighth player in PGA Tour history to shoot a 59.

Brian Harman and Bud Cauley finished two back of Swafford. The 29-year-old Swafford started the day two strokes out of the lead, but his Sunday 5-under 67 secured his first career Tour victory.

Over the first three rounds of the tournament, players rotated between three different courses, leading to many scorecards that looked inconsistent, but on the day where everyone played the Stadium Course, Swafford was king.

How Swafford Did It

A University of Georgia product, Swafford was near the top of the leaderboard all week, and was solo-leader after two rounds. He did not get off to the start he wanted, with a bogey-five on the par-4 first hole. Fortunately for Swafford, it was his only bogey of the day. He got his birdies in bunches: getting three in a row from 7-9, and three more consecutively from 15-17. He parred everything else.

The last birdie separated himself from a leaderboard that had become very congested. Despite a man in the field (Hadwin) carding 13 birdies on Saturday, Swafford’s 26 was #1 for the week. He only hit 8 of 14 fairways on the day, but was accurate on hitting 15 of 18 greens. He led the field in GIR for the week.

What It Means For Swafford

Going into the event he was the world’s 204th ranked golfer, but will jump significantly when the rankings come out tonight.

In five starts in the new season, Swafford had made the cut in all five tournaments, with a high finish of T13 at last week’s Sony Open.

It’s a life-changing victory for Swafford who will now be playing in his first Masters in April. He has played in two career majors, both the U.S. Open – missing the cut in both.

Swafford’s 67 (-5) was actually the third best round in the field. American Ryder Cup Star Patrick Reed had the low round of the day, a 7-under 65.

Finishing in a tie for 12th, the man who finished second on the PGA Tour in top 10s last year barely missed his second of the new season.

The second best round was the 6-under 66 posted by Scott Stallings.

Stallings had an incredible eagle-birdie-birdie finish to sneak into the top 10.

Defending Champion Jason Dufner finished with one of the few bogey-free rounds, shooting a 4-under 68 and posting a T25 in his championship defense.

Not Their Best Sunday

Dominic Bozzelli came out of seemingly nowhere to take the 18-hole lead, and hung around long enough to play in the final pairing on Sunday.

However, he ran out of gas in round 4, but birdied the final two holes to at least finish his round under par (-1).

He finished in solo-fifth, easily his best finish on the PGA Tour.

In eighth place and just four strokes out of the lead, Chris Kirk had a prayer going into Sunday, but had one of the worst rounds in the field, finishing double-double and dropping to T21 after a two-over 74.

“I’ll tell you, I was a little more uneasy at the beginning of the round, I just kind of had a good rhythm all day, good posture, that’s what my trainer Jeff Banicek and I have been working on all week, and that’s kind of what fails late in the week, last week a little bit, and we focused on it this week, and I just had a really good rhythm and was standing tall and hit it beautifully.”
– Hudson Swafford, CareerBuilder Challenge Champion