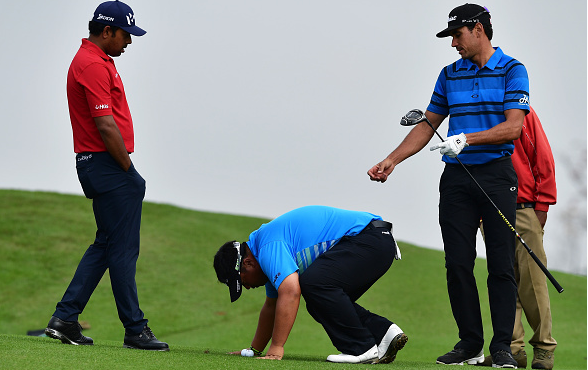 SSP Chawrasia successfully defended his title at the Hero Indian Open in New Delhi. The 28-year-old from Calcutta finished at 10-under par and lapped the field by 7-strokes.

It was Chawrasia’s first win of the season. In fact it was his first made-cut since the Abu Dhabi back in early January where he finished T70. The diminutive (5’5″, 140 lbs) Indian has missed the cut in five of the six starts this season, so this week is a season-maker for the (at the moment) 258th ranked player in the world.

Chawrasia hopes this victory will improve his performance in Europe. “I learned many things this week and hopefully I can play better in Europe. That’s my target next, I have to win in Europe,” said Chawrasia.

Here’s a round up of the best shots and photos from the Hero Indian Open.

Best Aim of the Week

Ten bucks to whoever nails the guy in the cart. David Horsey wins!

You don't see this every day… pic.twitter.com/sNprvC53ZE

Par of the Week

Gregory Havret of France with the incredible save on the 8th hole.

When your putt breaks at a right angle…and goes in. ? pic.twitter.com/L0x6xSIfoZ

Ace of the Week

Duncan Stewart drops it for a hole-in-one, and new wheels.

Presenting the first hole-in-one of the week…

Now drive it home, cuz you missed the cut!

Up & Down of the Week

Why the Euro Tour is so great to watch.

A brave up and down. Very brave.

Chip-in of the Week

Gavin Green from off the green and in!

When you chip in with the last shot of the day. ?

Bogey of the Week

Romain Langasque with the luckiest shot of the week. After dunking it in the water, the Frenchman nails the pin on his approach (6th shot) to avoid what would have easily been a snowman.

Toughest Lie of the Week

Why we love the Euro Tour, part two.

Funniest Photo of the Week

Kiradech Aphibarnrat of Thailand inspects his ball which landed next to Anirban Lahiri’s ball on the 15th hole. Rafa Cabrera Bello looks on to make sure Aphibarnrat doesn’t tip over.

Camera Work of the Week

Rafy gets out of the trap and nearly takes out a camera.