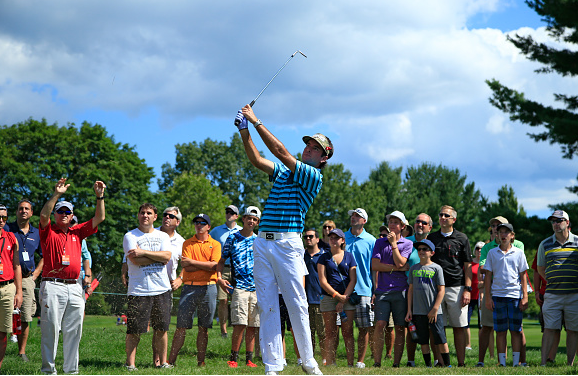 Vaughn Taylor, Andrew Loupe, and Jerry Kelly all fired 64s on Thursday at TPC River Highlands. The trio share the lead at 6-under after round one of the Travelers Championship.

Here’s a round up of quotes and photos from some of the notable players, following round number one.

“Yeah. I played good early. Just couldn’t get the putts to go. Just didn’t hit it quite close enough really. Hit a good fairway bunker shot on 9 and hit a good putt there and kind of got things going… I was feeling good and hitting some good shots. Putter started feeling better. You know, just get on a run sometimes and just kind of ride.”
-Vaughn Taylor, Co-Leader at -6

“I thought I was solid. Early on I hit a couple tee shots to the left, but I was proud of the way I adjusted. Just one hiccup. Missed a pretty short one up the hill. Guess I just pushed it a little bit. Stepped up to the next short one and knocked it in. Really good to finish with a birdie on 18.”
-Andrew Loupe, Co-Leader at -6

“I feel a lot better. Every day is better and better… We missed a couple putts. We had some aggressive lip-outs today, too. Felt like we played a lot better. Could have easily been 8-, 9-under. A little disappointing with 3-under, but didn’t shoot myself out of it.”
-Brooks Koepka, T9 at -3

“Yeah, my game feels really good. A little bit of a fight there in the middle and I was able to hold on and post a good one. My game is really coming around. It’s going in the right direction pretty quickly. This would be a great week to put it all together… I’m excited to get out here. I just want to play and fight through this and hopefully — I know if I play well I can contend every week. That’s my goal.”
-Keegan Bradley, T9 at -3

“Very solid. You know, around here I like to try to hit a lot of greens. You know, today I hit my driver halfway decent to start the round. Hung on; made a couple birdies. You know, you always want to putt better, but at the same time, I made some putts to save par. It was a solid round. A solid start to the day. A solid start to the week… Obviously you would like a few more, but at the same time, I liked the ease of the 3-under out there today. It was nice.”
-Bubba Watson, T9 at -3