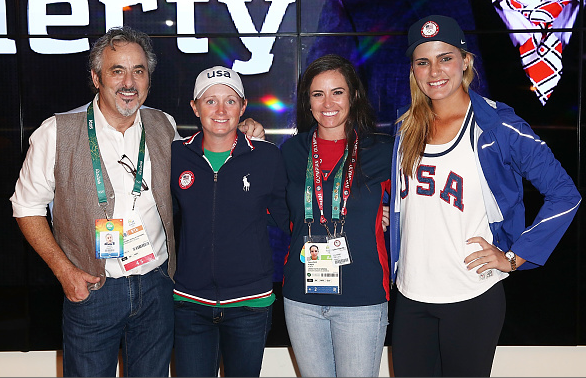 Olympic Golf was played for the first time in 112 years last week, when Great Britain’s Justin Rose held off ball striker extraordinaire Henrik Stenson to win the gold medal. The week was considered a huge success and sets up some potentially great Olympic golf down the road.

Now, it’s the women’s turn. While many of the best male golfers sat out the Olympics, everyone on the women’s side wanted to be in Rio, including the big three of Lydia Ko, Ariya Jutanugarn, and Brooke Henderson. Wednesday marks what should be a thrilling week on a big stage.

1. Which, if Any, of the Big Three Will Emerge?

The LPGA Tour has been largely dominated by three women this year: New Zealand’s Lydia Ko (world #1), Thailand’s Ariya Jutanugarn (world #2), and Canada’s Brooke Henderson (world #3). They are far from being the only talent at Rio, but they will draw the most viewers.

Ko: The 19 year old Ko has been re-writing the record books, becoming the youngest to do something seemingly every week. She has 14 career victories, including 4 this year. She has 10 top 5’s in 16 starts. One major victory this year: Ana Inspiration.

Jutanugarn: The old maid of the big three at 20 years old, Jutanugarn might be the hottest golfer on the planet right now, with four wins in her past nine events. That nine event stretch also includes a T2 and a 3. One major victory this year: RICOH Women’s British Open.

Henderson: The 18 year old Henderson is having a breakthrough season on the LPGA with two victories, in addition to 11 top 10s. One major victory this year: KPMG Women’s PGA Championship.

2. Which Inbee Park Will Show Up?

This has been a season of accomplishment and controversy for the 28 year old South Korean legend. She became the youngest to ever qualify for the LPGA Hall of Fame, but many questioned how she got her starts this year, playing with a severe thumb injury that negatively affected her performance. When she’s healthy, there may not be anyone better. She has 17 career victories, including seven majors, with two of those coming in 2015.

However, with the thumb injury, she has not posted a quality start since a T6 at the ANA Inspiration in late March. Park believes she is good to go for the Olympics, but if she is going to medal, she will need to show form that we haven’t seen in months.

The Olympics is an individual event, but all the players still want to bring honor to their home countries. 34 different countries will be represented at this tournament, with talent all over. However, when it comes to women’s golf, Korea is queen. Golfers from South Korea make up five of the top 10 in the world rankings, and in this tournament will be represented by Inbee Park (#5), Sei Young Kim (#6), In Gee Chun (#8), and Amy Yang (#9).

In South Korea, golf is considered the #1 sport for women, and they have a positive golf reputation as a result. With the Olympics back for the first time in 112 years, this will be a great stage for Korea to show what it can do.

USA has three representatives in these Olympics. World #4 Lexi Thompson, world #7 Stacy Lewis, and world #15 Gerina Pillar. Thompson is the most well-known of the three, largely due to her athletics gifts. She is #1 on the LPGA Tour in driving distance at 281.4 yards. The 21-year-old Thompson has seven career victories, including one major. She has one victory so far in 2015.

Lewis has 11 career victories with two coming in majors. The 31-year-old Pillar is still looking for her first career victory and is a bit of a late bloomer. She has eight top 10 finishes this season.