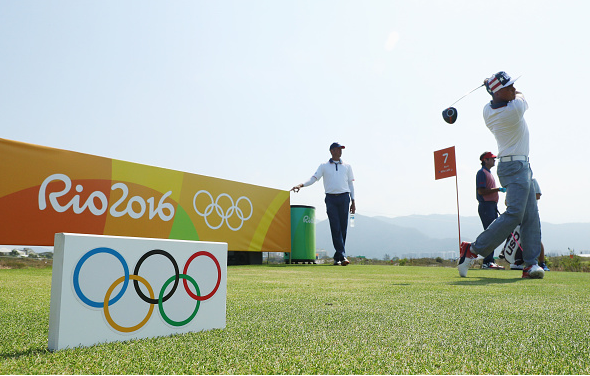 Lyon’s ball hitting the bottom of the cup at the 16th hole nearly 112 years ago was the last taste anyone has had of Olympic golf. That makes at least 4-5 generations of golfers who never had a reason to dream of Olympic glory.

With the intense national pride shown by golfers at Ryder Cups over the years, Olympic golf had potential for enormous popularity. Maybe it still does, but these 2016 games have been plagued with conflict and questions so far. Many of golf’s elites chose to pass on the Olympics, citing health issues over a scare of the Zika virus, or scheduling conflicts as these games were a money-less stop on an extremely hectic summer slate.

Players like Jason Day, Dustin Johnson, Jordan Spieth, and Rory McIlroy grew up dreaming of winning majors, not Olympic medals. With their tour cards not secured for the future, players like Camilo Villegas and Brendon de Jonge could not afford to miss out on PGA events while the Olympics were going on.

Even still, there is a lot of reason to be optimistic. Many great players passed, but even more great players didn’t pass. The nationalism and pride angle is still there. Also, being the first of something new makes these players pioneers of the modern golf age. That should be a fun sight, especially with so many of the players being avid social media users.

The field is an eclectic mix of “Who’s Who” and “Who’s That?”. Unknown players like Seamus Power, Siddikur Rahman, and Ryan Fox are more or less making their debuts on the world stage in front of a global TV audience. Formerly anonymous players will become relevant before our eyes. It is an exciting new experience, and we are all on the ground floor for it.

As outlined above, this is the first time golf has been an Olympic sport since the 1904 St. Louis games. George Lyons has been the defending champion for 112 years. The origins of golf in the Olympics can be traced back to four years before St. Louis, to the Paris Games of 1900. On the men’s side, Charles Sands, an American, won gold while golfers from Great Britain took silver and bronze.

The women’s side was especially notable because not only was it the first time women participated in Olympic golf, but it was the first time women were able to compete at any Olympic event. Gold was won by American Margaret Abbott, who did not realize it was an Olympic event; she, in addition to many others in the field, thought it was just a regular golf tournament. Abbott was given a bowl instead of a medal and died without ever knowing she was an Olympian. It is one of the strangest developments in Olympic history.

The course was built for this event, so most of its history will be created in the future.

Course Info: With no rough and wide-open fairways, the course is likely to play fast. The course is a sandbelt style that takes more after European courses than American ones. It finishes with a par-5, leaving the possibility of late-tournament drama. The main hazards at Olympic will be sweeping winds and copious sand traps.

The defending champion is Canadian golfer George Lyon who, at the 1904 Olympic games in St. Louis, won his match-play final 3 & 2 over favored Chander Egan.

It’s the Olympics. National pride is storyline A, B, C, D, and E. While Olympic golf is not a team format, these players desperately want to bring glory to their respective countries. The expectation is that players will be supportive of golfers from the same country. Rickie Fowler talked about how the U.S. is the only country that can sweep the podium (they have four representatives, nobody else has more than two), something he would take great pride in.

Keep in mind, nobody has more Olympic golf experience than anyone else. Of the 34 countries being represented (world ranking in parenthesis), here are the five countries, in order, most likely to take gold:

Danny Willett is having a breakthrough season with his big moment coming in April when he won The Masters. By the strength of that win, plus a win at the European Tour’s Omega Dubai Desert Classic, and two other top 3’s in Europe, Willett currently leads the Race to Dubai Standings. However, as great of a season as he has been having, his recent form has not been so great. He was not a factor at any of the last three majors and he has not finished better than T37 in Europe since May. Rose, winner of the 2013 U.S. Open, has won at least one PGA tournament in each of the past six seasons. His high finish in 2016 so far is a solo-third at the Wells Fargo Championship. Overall, he has five top 10 finishes in the U.S. this year.

The German contingency is much lower in the world rankings than the Great Britain duo, but they have been in much better form as of late. Kaymer is a two-time major winner, is coming off a T7 at the PGA Championship, and also finished T5 at the French Open. He has shown a propensity for clutch putting at big events. At 45, Cejka is having his best season on the PGA Tour, highlighted by four top tens, including a T9 at The Players and a T5 at the recent Canadian Open. He ranks third in tour in par 3 scoring average and T11 in par-5 scoring average, which could bode well for him in Rio.

Despite a surprising missed cut at the PGA Championship, Sergio has shown up big in bigger events this year. He finished T5 at both the U.S. Open and Open Championship, in addition to a win in late May at the AT&T Byron Nelson, ousting Brooks Koepka in a playoff. Sergio is 5th on tour in GIR which is a good sign anywhere. He might also need this one more than anyone in the field, something we will discuss further momentarily. Cabrera-Bello has been a little under-the-radar this year, with two runner-up finishes early in the year, and a T3 at the Dell Match Play, where he knocked off Rory McIlroy in the consolation match.

With the Olympics not being a team event, there is definitely strength in numbers, with the U.S. having twice as many representatives as anyone else. Watson has been in something of a funk, with no top-10s since March, but with the big, open fairways of the Olympics, this course suits him extremely well. Similar to Bubba, Fowler’s best events were earlier in the year. He has been a surprising non-factor in majors the past two years, but he did finish in the top 5 of all four 2014 majors, and he won last year’s Players Championship. He has the kind of personality where he will have fun anywhere, and being able to relax and let go is a big advantage in a tournament like this. Reed and Kuchar have both been top-10 machines this season, with nine a piece. As a whole, the U.S. is big in both numbers and talent, but does not have anyone who has contended at a big event this season.

This lofty ranking is largely off the strength of Stenson, who has been otherworldly as of late. Stenson won the Open Championship in a performance for the ages, and also contended at the PGA Championship. He might be the best ball-striker in the game at the moment. Lingmerth is no Stenson, but he is a fine golfer in his own right. He had quality starts at the U.S. Open (12th) and PGA Championship (T22). Lingmerth’s career highlight was winning the 2015 Memorial, which has one of the strongest fields among the non-majors.

Sergio Garcia: A Chance to Re-write his Legacy?

Sergio might have the most interesting storyline going into the Olympics as his career has been both very successful and somewhat disappointing. He has nine career PGA Tour victories and 11 European Tour titles. He has finished at least fourth in all four majors, with a mind-boggling 22 top 10s (four runner-ups) in majors.

Most consider him the second best Spaniard golfer in history, after the inimitable Seve Ballesteros. Sergio has been undeniably great, but at the same time, his career has been largely defined by never winning a major. For all his talent, zero majors is untenable. It has gotten to the point that Sergio no longer expects to win a major, but rather is hoping. Nobody needs a gold medal for legacy purposes, but nobody would benefit from it more than Sergio. It would be something that people could point to when discussing Sergio as an all-time great.

Henrik Stenson, the 40-year-old Swede is undoubtably the man to beat in this tournament. He is the highest ranking player in the field, and has the best current form. In obliterating everyone in the field not named Phil Mickelson, Stenson made an enormous statement with his Open Championship victory. That final round 63, showed that he is unbeatable when he has his game going. He also contended at the PGA Championship, opening with three rounds of 67 before a disappointing final round 71.

Stenson leads the tour in greens in regulation, is second in strokes gained: approach the green, and third in strokes gained: tee-to-green. His putting stats for the year are not special, but his putting performance at The Open Championship was absolutely brilliant. If that is the putting stroke Stenson brings to Rio, watch out!

Thongchai Jaidee – At 47 years of age, Thailand’s Thongchai Jaidee is the oldest competitor in the field. He was the winner of the French Open in early July. He has a victory in four of the past five seasons, and has consistently finished high in the Race to Dubai standings.

Byeong Hun An – An, the young bomber from South Korea will have an opportunity to really open his game up in Rio. He showed great skill with a T9 at the Dell Match Play earlier this year, and finished 7th in the 2015 Race to Dubai standings.

Emiliano Grillo – Grillo, the 23-year-old from Argentina got his rookie season on the PGA Tour to a tremendous start with a win at the season-opening Fry.com Open. He looked good in the major season, making the cut in all four and finishing 17th or better in three. He ranks second on tour in total driving.

Jhonattan Vegas – Vegas, the lone representative of Venezuela, has a win at the Canadian Open and a round of 60 in the past month. He hits it long (12th on tour in driving distance), and ranks fourth on tour in GIR.

Jaco Van Zyl – Van Zyl, the 37-year-old from South Africa withdrew from both the Open Championship and PGA Championship to focus on the Olympics. He may be more personally vested in this tournament than anyone.