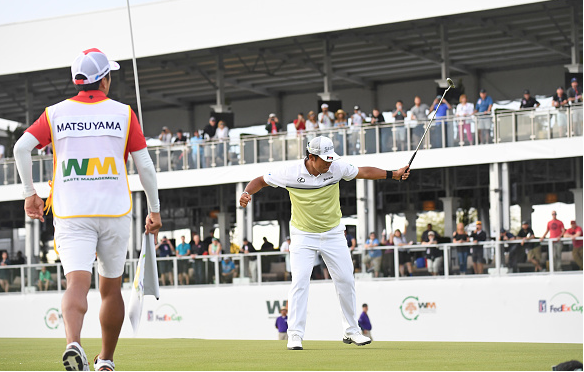 This is the second year in a row that the WM Phoenix Open went into a playoff and also a second straight year for Hideki Matsuyama.

Matsuyama outlasted Webb Simpson, and won it on the fourth playoff hole.

Louis Oosthuizen carded a final round 65 to move into solo 3rd. Rounding out the Top-5 were Rickie Fowler and J.J. Spaun, who both finished 2 shots back at 15-under.

To wrap up the coverage of the WM Phoenix Open, here are the top shots from the final round.

The defending champ, Hideki Matsuyama, started the day 4 back but after a final round 66, he found himself in a playoff with Webb Simpson.

Matsuyama and Simpson tied with pars on the first 3 playoff holes. Then, at the par-4 17th, Matsuyama drained this putt to win for the second straight year in Phoenix.

Matt Kuchar started his front nine very sluggish, playing it in 2-over. However, 3 birdies on the back nine pushed Kuchar to a T9 finish.

Kuchar came to the par-3 16th needing to hit it close and get back to level par on the day. Kuchar ended up hitting the closest tee shot of the day and nearly made the fans go nuts.

They love Kuchar.
They love the shot.

The best of the day at golf's loudest hole.#QuickHits pic.twitter.com/VRcXHXPCat

After matching pars at holes 1 and 2, Matsuyama hit an excellent approach shot from 254 yards out on the par-5 3rd. Matsuyama’s approach nearly went in for an albatross, however, settled to about 3 feet. Matsuyama went on to make the putt for eagle and propelled him to make a charge at the lead.

What a shot. #QuickHits pic.twitter.com/fsfw5smXYG