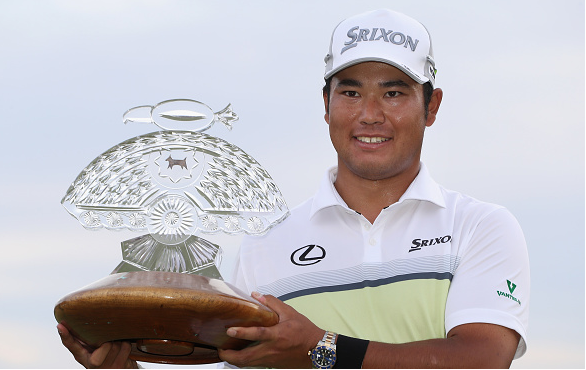 Webb Simpson, the 2012 U.S. Open Champion, nearly pulled off the second-best come-from-behind overtime victory of Super Bowl Sunday. Starting the day in 12th place at the heavily-attended Waste Management Phoenix Open, six-strokes behind 54-hole leader Byeong Hun-An, Simpson was flawless in regulation capping off the round with a furious fourth quarter, posting birdies on three of his final four holes to shoot 7-under 64.

Matsuyama, who now has two wins and two runner-ups in the young season, may have re-asserted himself as the hottest golfer on the planet, after taking a back seat to Justin Thomas over the past few weeks.

The 24-year-old pride of Japan shot a bogey-free 66 on Sunday, as he and Webb Simpson finished one stroke ahead of Louis Oosthuizen, and two ahead of 2016 runner-up Rickie Fowler and little-known J.J. Spaun.

How Matsuyama Did It

Matsuyama had cooled off some lately from his torrid start to the season, but picked one of the hottest places in the United States to heat back up. His title defense started off well with an opening round 65 – good for second place. A pair of 68s on Friday and Saturday put him in a great position for the final round, which he took full advantage of.

An eagle, three birdies, and no bogeys led to his 66. He could have won in regulation with a birdie on any of his last three holes, but a par-par-par finish was still good enough for the playoff. His winning shot was a 10-foot birdie on the 17th hole, the fourth hole of the sudden death playoff.

A big key to his win was improvements off the tee. After struggling with driving accuracy in rounds two and three, Matsuyama was much better in round four, hitting 12 of 14 greens.

What It Means For Matsuyama

Matsuyama’s successful defense at TPC Scottsdale told us what we already knew: he is really, really good. Ranked #5 in the world, he has finished in the top two in four of his six 2016-17 events.

Counting international events and unofficial PGA Tour events (like the Hero World Challenge, Tiger’s tournament), he has been the winner of five of his last nine events. It will be exciting to see whether this is part of his breakout as an elite PGA Tour player, or whether he has just caught fire. Most would believe it’s the former.

As great as Matsuyama and Simpson were in the final round, they weren’t alone in taking advantage of great conditions. Former Open Championship winner Louis Oosthuizen was also bogey-free and with six birdies on the day, shot a six-under 66. It is his best finish in the U.S. since he was runner-up last March at the WGC- Dell Match Play.

Rickie Fowler, the man who lost to Matsuyama in last year’s four-hole playoff found himself close again in Scottsdale when he exploded into contention on the back nine, with birdies on 13, 14, 16, and 17. The final round 66 was also bogey-free. Fowler finished T4, two strokes out of the playoff.

After birdies on 5, 6, and 7, Jordan Spieth looked to have a chance if he could keep the good shots coming. His back nine was not quite as good, but the man who has been unbelievable in final rounds lately added another one to his recent record: a 4-under 67, which put him at -12 for the week, and into the top-10 – a tie for 9th place.

If there is anyone who can commiserate with the Atlanta Falcons right now, it’s Byeong Hun An. The 25-year-old from South Korea looked to be in good position for his first career victory, as the third round leader. He looked good early with three front-nine birdies, but his second half, much like the Falcons, was a complete disaster.

Four bogeys, including two on 17 and 18, harpooned his tournament. Five of his six bogeys for the entire week were in his Sunday round of two-over 73. He finished in solo sixth place.

Things were not any better for Scotland’s Martin Laird, who was in second place heading into the final round. Laird had a birdie-free round, adding two bogeys to match An’s 73. Laird finished T7 as he still tries to regain the form he showed when he got hot during the 2013 FedEx Cup playoffs.

A Tale of Two Phils

Phil Mickelson, a three-time winner of the Phoenix Open, was the crowd favorite this week, as he was a superstar collegiate golfer at nearby Arizona State. Phil put himself into contention with four front nine birdies, but his back nine was even worse than An’s.

Two back-nine birdies were dwarfed by the +6 he shot on the other seven holes (four bogeys and a double), and he posted a round of even-par 72. It was a surprising finish for the man who has played in every Phoenix Open since 1991.

“I mean, there is nothing like it in golf. Playing in front of the number of fans and gallery this past week, great motivation. I just try to have fun with it, and at the same time, though, keep my focus and was able to do it.”
–Hideki Matsuyama, back-to-back Waste Management Phoenix Open Champion