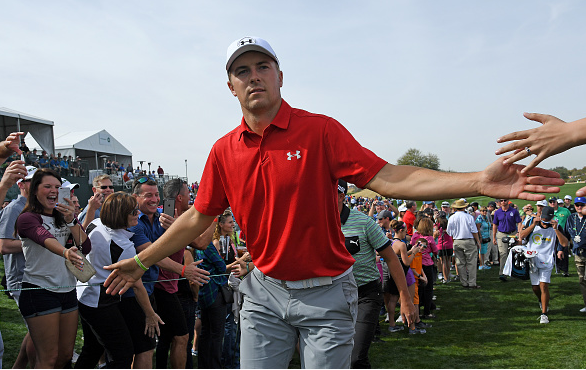 As Round 1 of the Waste Management Phoenix Open comes to a conclusion, Matt Kuchar (-7) holds a one shot lead defending champ Hideki Matsuyama and Brendan Steele.

Rounding out the top 5 are John Peterson, Robert Garrigus, Scott Brown, Chris Kirk and Byeong Hun An after all carding 5-under 66s.

To wrap up our coverage of round one, here are the top 3 shots.

The 23-year-old, Berger, had an up and down day that included 5 bogeys, 3 birdies and an eagle. However, Berger did provide some entertainment on both of the most exciting holes at TPC Scottsdale, the Par-3 16th and the drivable 17th.

Berger played the stadium 16th to perfection, striking his tee shot to 19 feet and rolled in the birdie. After hitting his tee shot just short on the 17th, Berger went on to chip it in for an eagle-2.

Two of the more fun holes …
Played to perfection.

After back-to-back wins, Thomas comes into the week as one of the favorites. However, Thomas finds himself five shots back of the lead after Round 1.

Thomas came to the 16th at even par but after nearly holing his tee shot for an ace, he headed to the drivable 17th at 1-under. Thomas went on to birdie the 17th and a par at the last capped off a 2-under round of 69.

Hottest player in golf takes on the loudest hole in golf.

Ryder Cup teammates, Rickie Fowler and Jordan Spieth, both had very similar right-to-lefters at the par-3 7th that found the bottom of the cup.

Giving the fans a reason to get loud. pic.twitter.com/yASkw4ZFWU