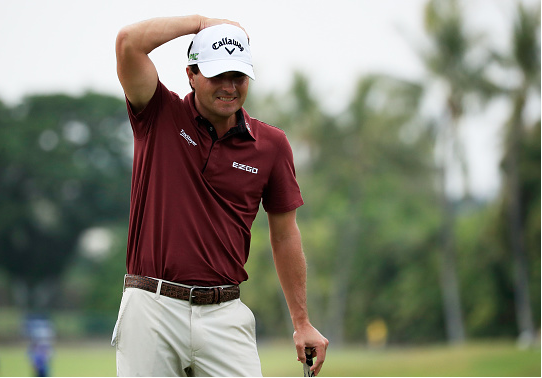 One of TV’s money-shots in golf is the player’s reaction to a made-putt, or missed-shot. Jack Nicklaus’s raised putter in the 1986 Masters comes to mind when thinking about reacting to the thrill of victory.

But more often than not, it’s the agony of defeat, or simply the missed-shot. It’s just a numbers game, as there are way more pars than birdies.

Here’s a round up of some player’s reactions to missed-opportunities during round three of the Sony Open at Waialae Country Club. (Tip: Hover over photo to read caption and credits.)

Johnson reacts to a missed birdie putt on the 15th hole.

Kisner reacts to a missed eagle putt on the 9th green (his 18th) which would have given him a 59.

Rose reacts to a missed scoring opportunity on the 18th.

Lovemark reacts on the 16th green.

Thomas hasn’t had much to complain about latley, but here he reacts to a missed birdie putt on the 11th.

Y.E. Yang reacts to his putt on the 7th hole.