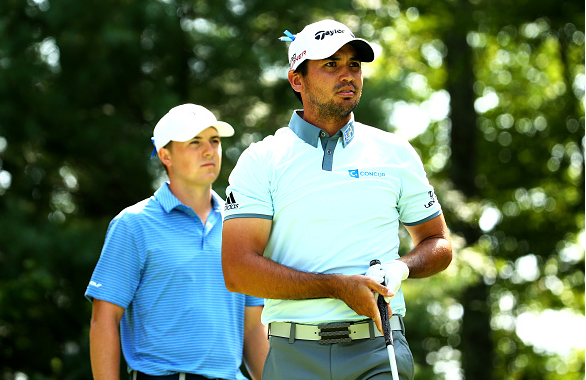 The Top-100 in the FedEx Cup now make their way up to TPC Boston for the second leg of the playoffs, the Deutsche Bank Championship.

Defending Champion, Rickie Fowler is surely coming in with some momentum, but following his final round disappointment at The Barclays, he will certainly have more on his mind than anyone else.

Here are 5 Power Picks for the Deutsche Bank Championship.

World No. 1, Jason Day, was never a serious contender at The Barclays, but was always lurking. Day shot under-par scores every day last week, and was the only player to do so. That goes to show that even when he’s not playing his best, he can still be right there. Day has never won at TPC Boston, but has three Top-10s in his eight outings here.
FedEx Cup: 2
OWGR: 1

Winner of the inaugural Deutsche Bank Championship, Adam Scott is also coming in with some momentum. Scott shot a brilliant 65 (-6) in the third round to put himself into contention, but followed that with a lackluster even-par 71 on Sunday. Nevertheless, he’s back to the site of his first PGA Tour victory, and should definitely pose a challenge this week.
FedEx Cup: 4
OWGR: 6

Following his missed cut at the PGA Championship, Dustin Johnson failed to make much noise at The Barclays. Johnson is in the midst the best season of his young career, and can make it even better with three events still to go. Johnson has two T-4 finishes at the Deutsche Bank Championship.
FedEx Cup: 3
OWGR: 2

One of the grittiest players on Tour, Patrick Reed finally snatched his first win of the season in dramatic fashion this past Sunday. Chasing Fowler, his Olympian teammate, Reed looked to be on a mission and scripted his fifth PGA Tour victory. Reed now has six Top-15 finishes in his six previous starts. Reed finished T-4th last year at TPC Boston.
FedEx Cup: 1
OWGR: 9

Sergio Garcia is back this week after deciding to skip the first Playoff event. Apart from his missed cut in his previous start at the PGA Championship, Garcia has had a fairly strong year. He won the AT&T Byron Nelson Classic, and has seven other Top-10’s, including at two of the Majors and in Rio. Garcia finished T-4th last year at TPC Boston.
FedEx Cup: 28
OWGR: 12