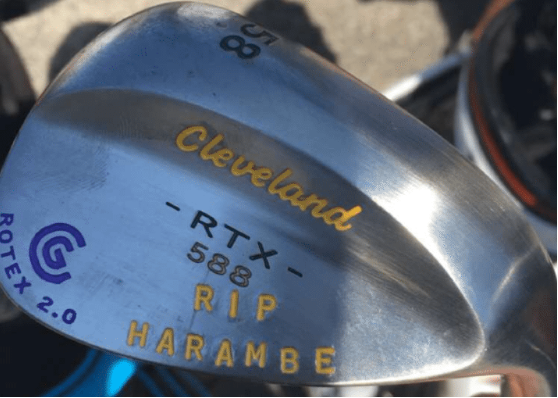 In today’s PGW Daily, we talk European Ryder Cup, Joost Luiten has a lie that is about as bad as they get, Camilo Villegas takes a swing he would like back, and John Daly is road-tripping with Jesper Parnevik.

Memorial of the Day

Smylie Kaufman stamped his wedge with something unusual, per Golfweek.

Harambe, of course, was the gorilla tragically shot and killed at the Cincinnati Zoo after a toddler jumped into the enclosure.

After his death, some animal activists went overboard with their demands and petitions, which in turn produced all kinds of memes.

One of the more popular memes is that Harambe’s killing was “an inside job.” It was even yelled after Ryan Moore hit his approach shot on the first hole at The Barclays this past Saturday. A golf fan shouted, “Harambe was an inside job!” (H/T Bro Bible)

Clarke cited Westwood and Kaymer for their “experience” and Pieters for his “momentum.”

Kaymer seems happy about it.

Russell Knox is not quite as happy:

Best wishes to the @RyderCupEurope. Disappointed not to be joining you, but will be rooting you on.

Steven Bowditch has some good advice for Knox.

Unlucky @rooknox now just go win about 13mil from the fed ex cup and watch from a yacht while sailing the Mediterranean! #provehimwrong

In a related note, Stephanie Wei is not a fan of the “experience” angle for choosing Ryder Cup players. Wei’s comment is obviously in reference to the Russell Knox snub.

Oh god, I mean, it was predictable, but I can't stand the "experience" argument for Ryder Cup captains picks. Translation: "he's my BFF."

It appears to be windy at the pro-am in Korea.

Ya it was blowing about 30 mph for the Hanwha Finance Classic pro am today ?

Road Trip Video of the Day

John Daly and Jesper Parnevik off to Canada for this week’s Champions Tour event.

After 9hrs driving we might have taken a wrong turn…? @PGA_JohnDaly @ShawClassic #roadtrip #canada #beautiful pic.twitter.com/eWOP3w1lbM

Bernhard Langer’s year has been ridiculous. Keep in mind, this isn’t a guy who just turned 50 and is dominating guys who haven’t played a PGA event in 20 years. He is 59 years old.

Here’s the latest from Beef, a regular in this space.

When your 4 yr old is more excited about his birthday cake than presents!! @BeefGolf #beefcake pic.twitter.com/OqeeZgTiMP

Danny Willett will not win the FedEx Cup this year, but he is still content with his season.

.@Danny_Willett in slow motion on the range, with his trophy watching on. ? pic.twitter.com/BiI3HDJPKn

It takes a lot of work to hold an Open Championship.

Scenery of the Day

Miguel Tabuena playing is in Switzerland for the Omega EU Masters.

First time in Switzerland for the @omegaEUmasters @omegaeuropeanmasters. Hoping I enjoy my golf as much as I'm enjoying the view. @asiantour @europeantour

Rough here at @GolfTheDutch is thick an juicy! You need to be straight!! Can you find the ball in the picture? pic.twitter.com/KHQ6wfEDyN

Camilo Villegas way off the mark on that last shot.

Villegas seemed a little embarrassed, but laughed it off.

Video of the Day Part II

The PGA Tour put together a video of Tiger’s swing every year of his professional career.

A look at Tiger Woods’ swing in every year of his professional career.#HelloWorld20https://t.co/iB2o111ex0 pic.twitter.com/USYmMEMVOA

Steven Bowditch Shot of the Day

The humorous Aussie rarely passes on an opportunity to poke fun at himself.

According to https://t.co/vOj6RWgJUf, what is the only statistical category that you rank inside the top 5?

Best Self-Promotion of the Day

Paula Creamer got a large crowd to chant her name.

Trick Shot of the Day

Tony Finau with a classy look at a tournament gala.

Cleveland Golf wants to get you closer to the hole.

#GetCloser with the all-new, totally re-designed RTX-3 from Cleveland Golf. Where Scoring Matters. #Own125 pic.twitter.com/gy9VwCItLz