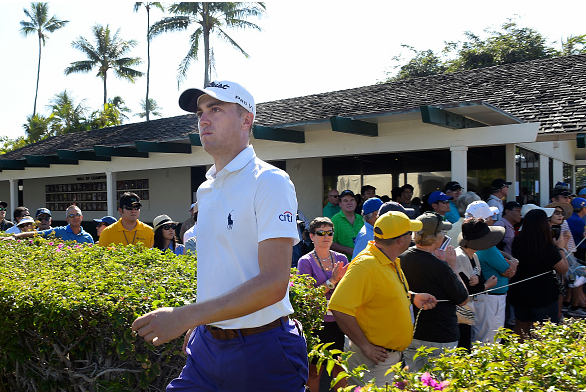 Justin Thomas followed up his historic round of 59 with a sizzling 64, which set the record for the lowest opening 36 holes in PGA Tour history.

After his round, Thomas, arguably the hottest player on the planet, sat down with the press and took some questions.

Here’s a round up of the 5 most interesting back and forths.

1. You set a PGA TOUR record today, lowest opening 36 holes on the PGA TOUR at 123, one better than the 124 set by three previous players, most recently by Jason Day at the 2015 BMW Championship. Obviously you’re playing pretty well through a couple of rounds. Just talk about your round today and your play through two rounds.

Thomas: Yeah, I played well today. I really hit a lot of quality shots I felt like, especially to start the round, which was key to kind of get me calm and get me in a good zone.

Yeah, all my bogeys today were terrible, they really were. The 3-putt on 8 was just not — losing my concentration, and 13 was a terrible iron shot and then 17 was just a mental mistake. Those bogeys really — when I was on 18 tee, I was pretty hot. I was pretty fired up; the fact that I had given up shots when I felt like I shouldn’t.

2. Can you just comment on the 123 (total score) and how that feels, and obviously you want to finish the job, but these records you keep notching up.

Thomas: It’s great. It’s just like yesterday, any time you can get your name in the record books or in history it’s — I’m very excited about that. But like you said, I have two more days to go. So I just need to put it behind me and get ready to try to shoot low this weekend.

3. Jordan was saying on TV that he’s got a lot of the same positions and lines as you, I assume around the green, and it’s kind of frustrating to see someone making all the putts and making it look so easy. Do you find that funny coming from him?

Thomas: I was going to say, now he knows how a lot of people felt (laughter). I said that to Jimmy today. This is probably the best I’ve seen Jordan play. I think even the putts he’s missing — he’s hit a couple putts that aren’t good, he’s hitting a lot of great putts that just aren’t dropping.

I feel like this weekend he’s going to post an 8- or 9-under one of the days, if he keeps hitting it like this. I mean, he’s giving himself too many opportunities and he’s obviously put a lot of hard work in the off-season on his ball-striking, and it’s paid off, for sure.

4. You mentioned Jordan, how well he’s playing. Where does this rank for you in terms of how well you’re playing, not necessarily this week, but just this year?

Thomas: It’s definitely the best of my career. I think I haven’t — I definitely haven’t shown the world my best golf. I haven’t even shown the world great golf, or consistent, great golf. I understand it’s tough to get everything clicking, and everything isn’t clicking for me. I mean, everything’s good, but that’s just — rounds like yesterday happen when everything’s clicking. I think I’m getting more confident and I’m improving, too. I’m doing a lot of hard work with my dad and putting coach, Matt Killen, this off-season to work on my weaknesses. I think I’m just trending up and hopefully — wanting to show everyone in the world what I have.

Thomas: Yeah, I hope to show a lot more to everybody the rest of my career. You don’t know what’s going to happen. I may never win again and I may win 60 times. It’s just something you just don’t know. We’ll see in 25, 30 years.