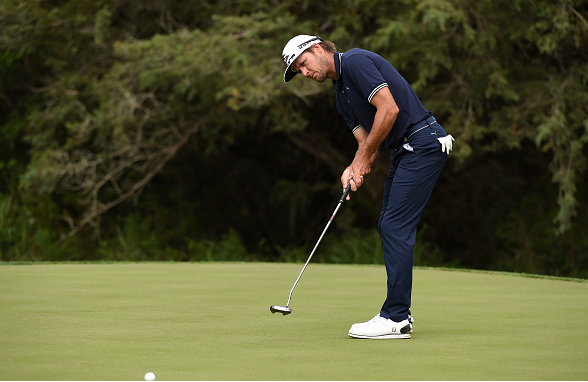 Branden Grace leads by one at the Valero Texas Open after a first-round 66 at TPC San Antonio. A group of four players are one shot back at 5-under par, including Stewart Cink. San Antonio native Patrick Reed is only 3 back after an opening-round 69.

Here’s a round up of quotes with some of players atop the leaderboard.

“I felt my game is coming on from Augusta. I made the cut which, for me, was a big thing. I had a good week. I played well the whole of last week, didn’t make the putts when I needed to but the game is progressing nicely and I do like this place, that’s why I’m back here. I played well here in the past. So, hopefully I can get a few better this time around.”
–Branden Grace, 1st, -6

“The course is playing great. The greens were soft enough where you could get it today. But still hard to get close to the hole, still hard to gauge everything. Just enough wind, but it played pretty benign out there. It was gettable as I’ve seen it. But, yeah, the par-5s are tricky for me. I’m not long enough to hit them in two. You got to have good wedge game. I gave one up on No. 8, had like 6 feet and missed it. That was kind of a bummer. All in all, I played great.”
–Will MacKenzie, T2, -5

“I believe this golf course requires hit a good tee shot and a good second shot, which I feel like that’s my strength. I think I did really well today and hopefully I can do it next three days.”
–John Huh, T2, -5

“It’s always nice to have guys in the group all playing well because, you know, just everybody is in a good mood. Easy conversations. We played with Brian Gay and Jhonny Vegas and me and Jhonny Vegas, the way he hits the ball it’s fun to watch no matter what you’re doing on the golf course. He made it look pretty easy out there the first half of the round or so. And, sure, I guess it made it look easy enough where we played well, too.”
–Stewart Cink, T2, -5

“It’s a fresh wedge and the one I was using before just — it wasn’t having any bite on it, too many shots that would ride on the face and kind of non-react how I wanted to. So, I love my new wedge. I’m able to actually hit the normal shots and get it to check and trickle out. It’s just, you know, under the gun first time using it there’s a couple shots out there that even though I only had two bogies I made some putts to kind of save chips that should have been perfect ended up four, five feet, six feet away. The game feels good. Need to keep on plugging along and make some more birdies.”
–Patrick Reed, T9, -3