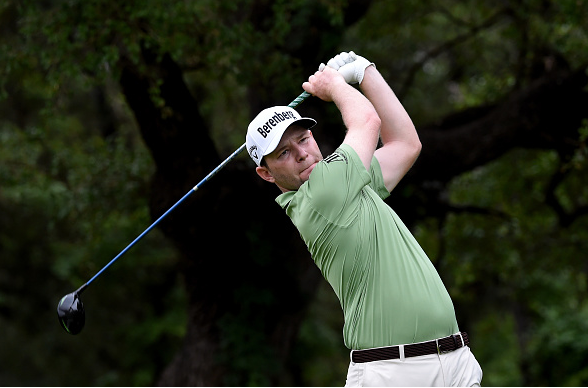 Over the past two years, South Africa’s Branden Grace has quietly become one of the best golfers in the world, but his 2016-17 season has gotten off to a slow start.

Coming off a season with one victory (the RBC Heritage) and six top 10’s, including two top-five finishes in majors (U.S. Open, PGA Championship), Grace has no top 10s, and just two finishes inside the top 20 in 11 events.

His T11 last week in his defense at the RBC Heritage was easily his best finish of the year, and he now looks primed to do even better at the Valero Texas Open, where his first round six-under 66 has him in the solo lead.

With seven birdies to just one bogey, Grace leads by one stroke over Will MacKenzie, John Huh, Stewart Cink, and Steven Alker. As it often is, the wind at the AT&T Oaks Course at TPC San Antonio was blowing, but that did not have a significant negative effect on scoring as 93 players in the 155-man field posted even-par or better in their first round.

Branden Grace did equal damage on both nines, with four birdies and a bogey on the front, and three birdies with no bogeys on the back. He was accurate all over, hitting 13 of 14 fairways and 14/18 greens, giving himself plenty of birdie chances, and his seven birdies were tied for the field lead.

Grace’s putting let him down today, however, as he gave nearly two strokes to the field in strokes gained: putting, which prevented a multiple-shot lead.

Bob Estes has not been heard from much on Tour lately. The 51-year-old has not won since 2002, and in the current season he has six missed cuts and a T46 in seven events.

Things clicked for him at TPC San Antonio today though, as he shot a bogey-free four-under 68 to place inside the top 10 after 18 holes. Hitting 12 of 14 fairways did not hurt either.

Also in that enormous group at -4 is Steve Marino, who was also bogey-free. The current season has been terrible for Marino, as he has missed over half his cuts (7 of 13) and has nothing higher than a T28.

Smylie Kaufman is in the midst of a nightmare 2017 with seven missed cuts (six in a row coming into this week) and a T72 in eight events. With his dreadful form combined with his spending last week on vacation with Jordan Spieth, Rickie Fowler, and Justin Thomas for #SB2K17, expectations were low, but with a first round -2 70, in spite of only hitting 6 of 14 fairways, Kaufman is looking like maybe the time off did him good.

A two-under 70 might not seem like anything special for reigning PGA Champion Jimmy Walker, but it is an encouraging result after he made headlines this week after announcing that he has Lyme Disease.

After his incredible back-to-back Sundays at The Masters and RBC Heritage, Matt Kuchar was among the favorites coming into the Valero, but he looked nothing of the sort today. After reaching -2 through eight holes, Kuchar played the back nine in three-over to post a one-over 73.

Ian Poulter is getting a lot of attention as he needs to earn $31,000 this week to keep his card (he is on the last start of a major medical exemption), but he did not look especially motivated in round one. He had just one birdie and posted a three-over 75, giving him a steep climb to make the 36-hole cut.

Luke Donald was even worse, hacking his way to a four-over 76, just one week after a runner-up finish at Harbour Town.

The Valero marks the professional debut of former #1 amateur Curtis Luck, who was low amateur at The Masters. The start of his pro career did not go the way he envisioned, as he played his first three holes bogey, bogey, bogey.

He played much better after that with three birdies and an eagle on his card, with the eagle coming on the par-4 fifth. He finished the day one-over, but his resiliency should be considered encouraging.

The only player who started worse than Luck was 2012 Champion Ben Curtis, who started bogey, bogey, bogey, quintuple bogey. Curtis withdrew after playing his first 10 holes +10. He has made just one cut in the eight events he has qualified for over the past two years.

“The ball-striking was definitely on. I left a few out there with a couple of short ones, but I made a couple of decent ones, which was nice. It was fun, it was nice to get in play off the tee and give myself some chances.”
– Branden Grace, Round 1 Leader