Jack Nicklaus owns a record six green jackets (1963, 1965-66, 1972, 1975, 1986), and the legend credits his success at Augusta National to his ability to manage what he considers the six most important shots – three from the tee and three approaches. It should come as no surprise that four of the six (67%) occur during the three-hole stretch known as Amen Corner.

Here’s the list of Jack’s most important shots at the Masters: 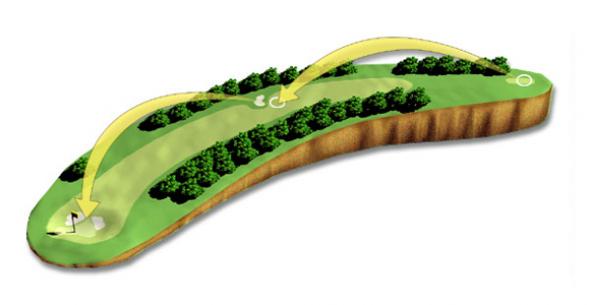 Par-5 | 575 yards
The second hole is a dogleg left which is reachable in two for the big hitters. Large, deep greenside bunkers demand special attention on the second shot. Originally, the green was guarded by a lone bunker on the right. That bunker was reduced in size in 1966, and a left bunker was added in 1946.

Par-4 | 505 yards
The beginning of Amen Corner with wind often a factor. The tee shot plays downhill and left to right. A pond guards the green to the left and a bunker is strategically placed right center. This hole may best be remembered for Larry Mize’s miraculous chip-in to defeat Greg Norman in a playoff in the 1987 Masters. Prior to 1950, Rae’s Creek ran in front of this green. It was replaced by a larger hazard in form of the current pond.

JACK SAYS: “The demanding par 4’s daunting approach can make or break a round.”

Par-3 | 155 yards
The 12th hole at Augusta National is one of the most iconic in all of golf. The shortest par three but with wind, club selection is often difficult, as anything from a six-iron to a nine-iron has been used. The daunting presence of Rae’s Creek and three strategically placed bunkers make it imperative that players land their shots on the putting surface. Golfers walk across the Ben Hogan Bridge to reach the green. Many dreams of Masters glory have vanished on this hole.

Par-5 | 510 yards
An accurate tee shot to the center of the fairway on this sweeping dogleg left allows a player to go for the green in two. This hole was originally an open field. Virtually all that Alister MacKenzie had to do was to build a green on the far side of the stream.

JACK SAYS: “A big right to left swing is crucial to scoring on the course’s shortest par 5.”

Par-5 | 510 yards
A tributary to Rae’s Creek winds in front of the raised green, and four bunkers threaten behind. The Byron Nelson Bridge is located just off the tee. Accuracy of the utmost importance here.

JACK SAYS: “Precision is key to positioning an eagle putt on the heavily protected green.”

Par-5 | 530 yards
A famously reachable par five when the winds are favorable. A well-struck second shot must be played over the pond and away from the bunker that guards the green on the right. Gene Sarazen hit his “shot heard ’round the world” here when he holed a four-wood approach from 235 yards away for a double eagle in 1935. In 1935, the 15th green had no greenside bunker. Bobby Jones firmly believed that all par fives on the course should be within reach of two shots by better players.

JACK SAYS: “Even quality shots reaching this green in two can end up in the water.”