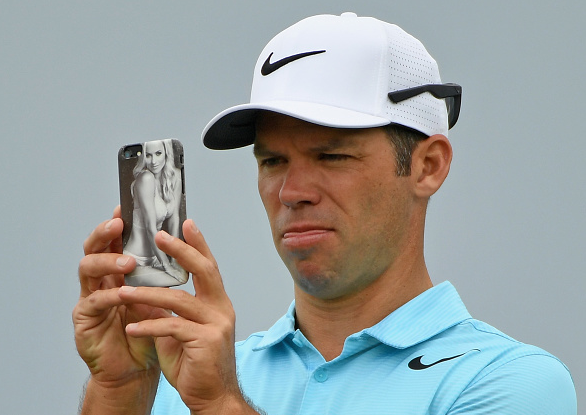 England’s Paul Casey, who is playing in this week’s U.S. Open at Erin Hills, apparently keeps a photo of his wife on his iphone.

No, not IN his phone but ON his phone, as in her photo is THE COVER.

Casey was spotted taking a photo with his phone at Erin Hills on Tuesday, and the Getty photographer, Ross Kinnard, made sure to get a close up of Casey’s phone cover.

Hey, who can blame him. Casey is married to Pollyanna Woodward, a former model, calendar girl, and B-list celebrity of sorts in the U.K.

In preparation for #TheOpen we find golf's hottest WAG! Could it be @PollyannaWW ??https://t.co/i1R4O89HJS pic.twitter.com/QlFkGRDXPs

The world No. 14 golfer also recently placed a photo of Pollyanna on the inside of his jacket.

With all due respect to the other #pgatour players, @Paul_Casey putting his wife @PollyannaWW inside of his bomber takes the win. #fire pic.twitter.com/ATaNojbNUa