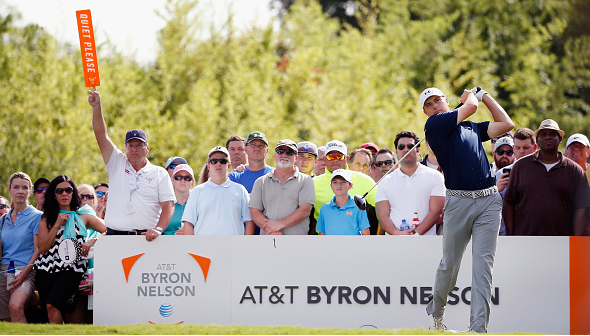 THE PLAYERS Championship might have come and gone, but the best of the best on the PGA Tour are not taking the week to decompress. Dustin Johnson, Jason Day, Sergio Garcia, and Jordan Spieth, among other current greats, are attempting to push their PLAYERS disappointment far from their psyche and are redirecting their efforts towards a prolific week in Dallas for the AT&T Byron Nelson.

The eponymous tournament celebrates the life and legacy of the man known as “Lord Byron,” a golf legend who won 64 career tournaments, despite retiring at the age of 34.

Whether it was as a golfer, a golf coach, a rancher, or a commentator, Nelson exemplified excellence in everything he did.

A top-heavy field of 156 professional golfers will do their best to honor him this week by attempting to add their name to the winner’s list of his tournament.

Located in Irving, Texas, a suburb of Dallas, long-known as the home of the Dallas Cowboys (until Jerry’s World opened in 2009), the Byron Nelson has been played in Dallas-Fort Worth area since 1944.

Called the “Texas Victory Open,” the $2,000 grand prize was awarded to Dallas native Byron Nelson when he won the inaugural event by an unbelievable 10 strokes over 17-time PGA Tour winner Jug McSpaden.

At -8, Nelson was the only player in the field under-par. The tournament produced an impressive list of winners in its infancy, with Sam Snead, Ben Hogan, Peter Thomson (his only victory in the U.S.), and Julius Boros all taking at least one title in the tournament’s first eight editions.

Watson holds the tournament record for most victories with four, followed by three from Snead, and two apiece by Nicklaus, Bruce Lietzke, and Sergio Garcia.

In 1968, the tournament officially incorporated Nelson into its name, the first time a tournament was named after a player. Since 1986, the Byron Nelson has been held at what is now the TPC Four Seasons Resort and Club. In two years, the event is set to move to a new Dallas-area course, Trinity Forest.

The defending champion of the AT&T Byron Nelson is Sergio Garcia. Down three strokes to Brooks Koepka entering the final round, Sergio overcame a couple of balls into the water to finish at 2-under 68, and forcing a playoff with Koepka.

After Kopeka hit his drive into the water on the first playoff hole, Sergio was able to make par to secure the title. The win, which was the ninth of his career, tied Sergio with Seve Ballesteros as the all-time leader among Spanish natives.

Like every tournament that Masters Champion Sergio Garcia plays in now, this one has a different feel than it did for him in the past.

Finally putting the whole “never won a major” thing in the rear view mirror, his legacy has changed, and the perception of his career has transcended closer to the all-time greats.

Last week, at THE PLAYERS Championship, was Sergio’s first start since that breakthrough major victory in April, and results were mixed. He got off to a below-average start with a 1-over 73, although to Sergio’s credit, it is an impressive result considering he was 4-over through six holes.

He was much better in the second round, shooting a 1-under 71 to get back to even-par. Then in round three, he was spectacular, shooting what tied for the second-lowest round of the week at 5-under 67 to get into contention.

As incredible as he was in the third round, he was equally terrible in the final round. After a birdie on the 2nd to inch closer to the lead, Sergio played his next six holes to 6-over, and despite three back-nine birdies, the damage was done, as he posted a 6-over 78 and plummeted into a tie for 30th.

All in all, the finish was disappointing, but he still showed resiliency and flashes of greatness. As a former PLAYERS Champion, the Sunday 78 can probably be excused.

In last year’s Byron Nelson, the 37-year-old Spaniard was impressive in catching Brooks Koepka on Sunday, and did what he needed to on the first playoff hole to secure the victory. That, however, was not Sergio’s only Byron Nelson highlight: he also took the 2004 title, when he blew a significant 54-hole lead, but was able to compose himself and win a playoff over Dudley Hart and Robert Damron.

As usual for Sergio, the flat stick has been his achilles heel; at -.819, he is a dismal 204th on Tour in strokes gained: putting. He has been especially prone to lapses in concentration on putts from 10 feet and in.

Basically any week where his putting is just sort of a liability is a week where Sergio contends.

Storyline 2: The World #1 In the Field

Dustin Johnson, who has a powerful stronghold on the No. 1 spot in the Official World Golf Rankings, finally cooled off (sort of) at THE PLAYERS Championship last week.

His prior history at the event had been dismal, with nothing better than a T28 in eight previous attempts, but after having gone 1st, 1st, 1st, T2 in his four previous Tour starts, he was still considered a favorite.

DJ played himself out of contention by going 73-74 in the middle rounds, but a Sunday-low four-under 68 reminded the field that he is still the best golfer in the world.

It says a lot about the standard that he’s set – that a T12 at an elite-field tournament is considered a disappointment. It was the first event that he finished outside the top six of since January.

As it seems to every week, everything is set up for him to make another run at a victory, something he has six of in the past 11 months.

The city has embraced him as one of their native sons, and he draws an enormous following every time he plays in the state. For most casual golf fans, the Byron Nelson is the tournament that first made them aware of Spieth; in 2010, he made the cut as a 16-year-old, reaching as high as fourth on the Sunday leaderboard before settling into a tie for 16th.

Surprisingly, that T16 is his best finish in seven tries at the event. Last year, he was in second place going into the final round, but was tripped up on Sunday as a 4-over 74 dropped him into a tie for 18th.

Spieth has not quite been Dustin Johnson-like in 2017, but he has played very well. He won the last AT&T sponsored event, the Pebble Beach Pro-Am in mid-February, one of four 2017 finishes inside the top four.

He is coming off an uncharacteristically poor performance at last week’s PLAYERS Championship, however, shooting 73-75 and missing the cut. He has been pretty average off the tees this year, but has phenomenal in his approach game as he is second on Tour in greens in regulation.

The underwhelming 2017 season of Jason Day, who was ranked #1 in the world on January 1st continued last week during his defense at THE PLAYERS Championship.

Now No. 4 in the world, Day got off to a decent start at TPC Sawgrass with a 2-under 70, but each round got progressively worse, and by Sunday he was a disaster; Day shot an eight-over 80 that included two double-bogeys and one quadruple-bogey.

Unbelievably, Day has just one top 20 this season, a T5 at the AT&T Pebble Beach Pro-Am in February. This will be his first attempt at the Byron Nelson since 2013, where he finished T27.

Koepka was the 54-hole leader in last year’s Byron Nelson, and was looking like a comfortable winner until two late bogeys put him in a regulation tie with Sergio Garcia. He then lost in a playoff after his tee shot on the first playoff hole landed in the water.

Koepka’s 2017 got off to a surprisingly poor start, but he’s managed to right the ship in the last month and a half, and is now coming off five consecutive starts of T16 or better. His best result of the year was a solo-second at the most recent Texas event, the Valero Texas Open three weeks ago.

THE PLAYERS could not have come at a worse time for the 28-year-old Tway, who is coming off three consecutive top-five finishes, but did not qualify to play at TPC Sawgrass. His solo-third at the Zurich Classic did not count towards world ranking points, but the son of PGA Tour great Bob Tway has risen from 433rd to 211th in the past month.

This will be his first career attempt at the Byron Nelson, and if the week off didn’t cool him down any, he will be among those to watch this week.

The bomber from Kentucky played well enough to make the 2016 Ryder Cup squad (he was one of Davis Love III’s captain’s picks), but he has struggled to find the same form in 2017. Consistency has been an issue for the 35-year-old, which was especially exemplified last week at THE PLAYERS, where he was the 54-hole co-leader, but finished T41 after a ghastly final round 12-over 84.

His final two holes at TPC Sawgrass were a quintuple-bogey 8 on the famous island green hole, and a double-bogey on 18. If he can move past the sting from that, he could be one to watch, even though he has not played the Byron Nelson since a T43 in 2010.

Kaufman, the popular young gun who won the first start of his rookie season in 2015 has finally shown signs of life as of late, a welcoming change after his game looked to be completely in the tank the previous 10 months.

He finished T5 at the Wells Fargo Championship, and followed that up with a T12 at THE PLAYERS where he broke 70 twice. Before that stretch, Kaufman had not finished in the top 20 of a tournament since last June, missing many more cuts than he had made.