Las Vegas’ own Danielle Kang easily thumped her close friend Lizette Salas on Friday, winning the first hole to go 1-up en route to a 4-and-3 victory.

“Of course I want to win whoever I’m playing, but it’s just different. It’s a different feeling, especially with Lizette,” said Kang, who has yet to trail in a match.

“My heart just kind of dropped because I don’t ever want her to miss putts. I’m not wishing that on her or anything.”

With a 3-0-0 record, Kang exits group play as the only player in the field with an unblemished record, and coupled with her extensive experience of Shadow Creek – where she’s a member, Kang is the clear favorite heading into the Round of 16.

Kang’s first opponent in the single elimination format will be England’s Bronte Law, who – in what could be a preview of the Solheim Cup, took down three Americans ro reach Round of 16.

After a tie with Amy Olson on Wednesday and a 2-and-1 win over Austin Ernst on Thursday, Law moved into the Round of 16 with 6-and-5 blowout over Annie Park on Friday.

“You still have to execute the shots, but obviously feeling that little bit of momentum shift is what you have to grab when you’re in match play,” said Law.

“I can sense it when it’s there. I think that’s one of the things that I like the most, it’s the quality that you kind of need to have in that situation.”

“She is American, so I’m running with that trend at the moment. Obviously, Danielle is one of the best players in the world, so there is nothing more to say than that.

“I’m still going to go out and play the game that I’ve been playing. I think when I’m on, I’m good enough to beat anyone. And if you can’t back yourself, then that’s all I can say.”

Unheralded American Jenny Coleman continued her surprisingly good play in Vegas, making a par putt on No. 18 in the day’s final match to tie with Ashleigh Buhai and reach the Round of 16.

Coleman was 3-up early on, but Buhai chipped away at the deficit and eventually tied the match with a birdie at No. 11. Buhai nearly chipped in for birdie from the front of the green at 18 to force a playoff, but two pars gave the group victory to Coleman.

“We’d been back and forth all day hitting like good shot, getting rewarded, hitting a good shot, not getting rewarded. You name it, it could happen,” said Coleman, who will face Ally Ewing in the Round of 16. “Just being very patient and hoping you get a little luck.”

Six matches went to sudden-death to settle Saturday’s match-play bracket. The longest playoff saw Jenny Shin knock out her fellow Las Vegas resident Alison Lee with a par on the fourth playoff hole. Anna Nordqvist made a two-putt par on the first playoff hole to eliminate No. 1 seed Jin Young Ko, after beating her by a 5-and-3 margin earlier in the day.

“I played really well this morning. She is a World No. 1, so I knew she was going to be a really tough match,” said Nordqvist. “Part of me felt like I didn’t have anything to lose because I knew I had to get my point to have a chance at a potential playoff, so just very proud of myself.”

With a par on the second playoff hole, Brittany Altomare reached the Round of 16 over Sei Young Kim, who won the 2017 Lorena Ochoa Match-Play and is the Tour’s most recent match-play winner. 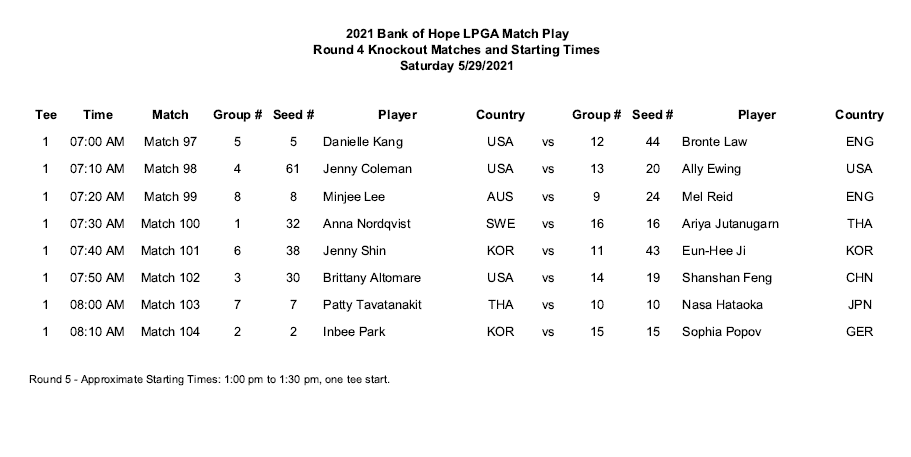 Material from the LPGA Tour Communications was used to compile this report.