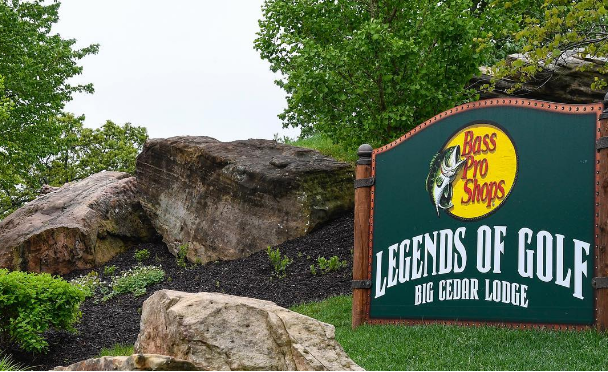 PGA TOUR Champions and Bass Pro Shops announced today a four-year title sponsorship extension of the Bass Pro Shops Legends of Golf at Big Cedar Lodge through 2021. The event annually brings together some of the biggest names in golf to compete in a team format on the Top of the Rock and Buffalo Ridge Courses at Big Cedar Lodge in Missouri’s Ozark Mountains, which is quickly becoming one of America’s next great golf destinations.

“Everyone at Bass Pro Shops and Big Cedar Lodge is honored to continue hosting the greatest names in golf for four more years of world-class golfing, fishing and fun,” said Johnny Morris. “This event underscores our commitment to connecting people with nature and showcasing the breathtaking beauty of our beloved Missouri Ozarks with the world.”

The extension comes just six days after the announcement that Tiger Woods will add the resort’s newest course, Payne’s Valley, with an opening set for 2019. Named in honor of Missouri native Payne Stewart, Woods’ first public-access course will compliment a new 13-hole short course designed by Gary Player (2017) and The Ozarks, a Coore & Crenshaw design set to debut in 2018. The three new venues will compliment Big Cedar Lodge’s existing courses, including the Jack Nicklaus-designed Top of the Rock and Tom Fazio-designed Buffalo Ridge Courses.

Big Cedar Lodge’s significant expansion into championship-caliber golf pairs alongside the 4,600-acre resort’s fishing, shooting, boating, hiking, spa and wellness offerings to create the ultimate outdoor recreation destination resort in the United States. During tournament week, PGA TOUR Champions players are afforded the opportunity to take part in outdoor activities at Big Cedar Lodge, which in turn creates one of the most unique experiences of any event in golf.

“We are excited to extend this partnership between the PGA TOUR and Bass Pro Shops. Johnny Morris’ commitment to making this event a premier stop on our annual schedule has allowed this tournament to achieve immeasurable stature since moving to Big Cedar Lodge in 2014,” said PGA TOUR Champions President Greg McLaughlin. “Our players continue to be amazed by the outdoor experiences provided during tournament week, and today’s announcement allows us to build on the great success this event has enjoyed through the years.”

Since 2014, the success of the Bass Pro Shops Legends of Golf at Big Cedar Lodge has extended well beyond the golf course. Over the past three years, the tournament has generated $3 million for local charities, with the nonprofit College of the Ozarks serving as the main charitable beneficiary.

It was another amazing week at the @bassprolegends. We'll see you again next year. ⛳️

The Bass Pro Shops Legends of Golf at Big Cedar Lodge dates back to 1978, and is frequently credited with creating the foundation for what would become PGA TOUR Champions. Sam Snead and Gardner Dickinson paired to win the inaugural tournament, which gave way to nearly four decades of memorable moments featuring the game’s all-time greats, including winners such as Lee Trevino, Tom Watson, Hale Irwin, Bernhard Langer and Mark O’Meara.

On Sunday, World Golf Hall of Fame member Vijay Singh paired alongside Carlos Franco to capture the 2017 Bass Pro Shops Legends of Golf at Big Cedar Lodge by one shot over the teams of Jeff Sluman/Fred Funk, Duffy Waldorf/Corey Pavin and Paul Goydos/Kevin Sutherland. The victory marked the first for Singh on PGA TOUR Champions, and the second for Franco, who broke through for his maiden win last fall as the Shaw Charity Classic.

Course Spotlight: Top of the Rock at Big Cedar Lodge