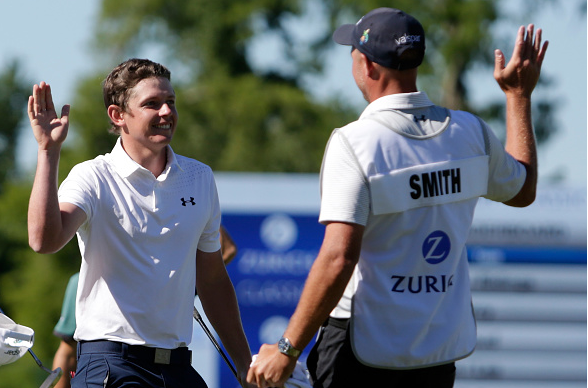 You would think that going bogey-free over an entire four-day 72-hole PGA tournament would guarantee a victory. It seems impossible that it wouldn’t, but that nearly did happen, thanks to the one-man wrecking crew of Kevin Kisner.

Despite Kisner’s heroics, which included six consecutive front-nine birdies and a chip-in eagle on 18 (which put the exclamation point on a round of 12-under 60), the four-day bogey-free team of Jonas Blixt and Cameron Smith won on the fourth hole of a Monday playoff, to take the PGA Tour’s first team tournament since 1981, the Zurich Classic.

The Blixt-Smith team was formidable, but was nearly caught on Sunday as Kisner caught fire playing with teammate Scott Brown. The playoff participants were 27-under for the Zurich team-play experiment, which, by all indications, was a rousing success.

Notables to Miss the Cut

How Blixt and Smith Did It

The Zurich Classic was played under two different team formats: Rounds 1 and 3 were alternate shots, while rounds 2 and 4 were best ball. Scores were MUCH lower on best ball days, and in rounds 1 and 3, it seemed to be a test of who would hurt their score the least.

Blixt, a 33-year-old from Sweden, and Smith, a 23-year-old from Australia, had a four-stroke lead after posting 67-62-68 over the first three rounds. With the Sunday best ball format, they knew the lead was far from safe. Kisner and Brown caught them early, largely due to the stellar play of Kisner, who contributed birdies on 2, 3, 4, 5, and 6.

While nobody on the course was capable of slowing down the red-hot Kisner, the weather took a shot. After his fifth straight birdie, storms caused a delay of six hours. When play resumed at 4:30 local time, Kisner birdied his next hole (#7), but cooled down considerably after that with just one more birdies (on #11) before he forced a playoff with a 35-yard pitch-in for eagle.

Meanwhile, Blixt and Smith both continued their good play; especially Smith, who had five back-nine birdies, including a much-needed birdie on #18. For the second straight year, a Monday finish was needed, as the two teams were tied at -27.

Despite the Sunday birdie barrage, the first three holes of the playoff were defined by missed-putt after missed-putt. Smith put an end to that on the fourth playoff hole, hitting a wedge to within two-feet and then sunk the short birdie putt.

What It Means for Blixt and Smith

The win was much needed for Blixt, who has two career victories, most recently at the 2013 Greenbrier. He has struggled badly since, and had been especially poor in the current season, missing 50% of his starts (7 in 14 events), and not finishing higher than T20. But this format seemed to suit him well.

For Smith, the Zurich victory is something of a breakthrough. Smith made his name known to the golf world when he was a surprise contender as 21-year-old at the 2015 U.S. Open, finishing 4th.

Smith received his PGA Tour card via the 2016 Web.com Tour season, and has mostly played well in his rookie season, missing cut three cuts in 15 events with a high of T6 at last week’s Valero Texas Open.

What It Means For the PGA Tour

It did not help that the two most high-profile teams, Jason Day–Rickie Fowler and Henrik Stenson–Justin Rose both missed the cut.

Aside from that, the Zurich was a refreshing change from standard stroke-play events, and the exciting final day was good for viewership. For now, the new format seems to be here to stay.

Kelly Kraft and Kevin Tway were the ying to the other’s yang in an incredible final round (best ball) 11-under 61.

On the front nine, Tway carried them (five birdies in the first seven holes) while Kraft was not doing much (just one front-nine birdie). But on the back nine, it was reversed, with Tway cooling off (one birdie), and Kraft playing phenomenal down the stretch, with three birdies and an eagle on his back nine.

They were under par all four days, posting 71-63-70-61 to finish in solo-third. That makes back-to-back third place finishes for Tway, who before last week’s Valero Texas Open had not finished better than T32 all season.

The Koepka brothers posted a T5 together, in Chase Koepka’s first PGA Tour event. While Brooks did most of the work, as expected, Chase’s contributions were mostly positive. Chase was actually the better of the two in the second round, and while he was terrible on Sunday’s front nine, he bounced back with a birdie and an eagle over the closing holes.

Chase was maybe the least qualified participant in the field of 180, but at the very least, he was not a liability. He even received 59 FedEx Cup points.

The team of Justin Thomas and Bud Cauley obliterated the front nine (their back nine) on Sunday, carding six birdies and an eagle after the turn to come in with a 28.

Their 11-under 61 vaulted them into a tie for fifth. It was 13 strokes better than their third round 74. That makes three consecutive top-10s for Cauley, who was mostly terrible from October to March. For Thomas, who has won three times this season, it was a fifth top-10 finish in 12 events.

Patrick Reed has been in the midst of an awful slump, but it was believed that team play might be just what the Ryder Cup specialist needed. And it seemed to help, as Reed played tremendous, especially in the first two rounds, as he partner Patrick Cantlay posted rounds of 68 (alternate shot) and 62 (best ball).

While they struggled to a third round (alternate shot) 75, which took them out of contention, overall, it was a very encouraging result (T14) for Reed, as he attempts to get a lost season back on track.

Going into the week, the much-watched duo of Jason Day and Rickie Fowler were one of the favorites, but they knew Day would have to get more out of his play than he has of late. Strangely, it was Fowler, who has been having a tremendous season, who held the pair back.

After a respectable first round 71 (alternate shots), Fowler contributed little in round two (best ball), with just a single birdie on the day. Their 68 was one of the higher second round scores, and they ended up missing the cut by two strokes.

Kevin Chappell, fresh off his first career victory at last week’s Valero Texas Open, was carried by partner Gary Woodland in round two (best ball). Chappell had two birdies to three bogeys while Woodland’s seven birdies keyed an impressive 65. Had Chappell been able to contribute anything, that 65 could have been even better, and they likely would have made the cut. The 65 combined with a poor opening-round 74 also left them two strokes on the wrong side of the cut line.