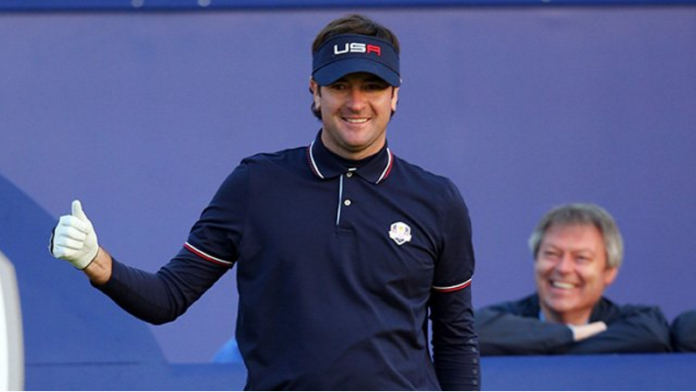 Bubba Watson seems to be talking more about the Olympics than defending his title at the Travelers this week. Or at least that’s all the media wants to discuss.

Today Bubba had another solid round of 68 at TPC River Highlands, and sits at 5-under for the tournament, 9 shots off the lead.

Here’s what the Olympian golfer had to say about his round today.

PRESS: Tell us about today.
BUBBA WATSON: Today was a weird day. You know, I hit a lot of quality shots. Let’s start off with No. 3, where I hit it out of the bunker into the wind, a club that could barely get to the hole, and somehow it flew over the green. Never left the flagstick because I hit a great shot, bogey there.

13, the par-5, I hit it right down the middle, then I hit a 4-iron that I thought was nice, flew onto the green but then catches the slope, goes all the way back in the water. Went through the rough and everything back into the water, which I didn’t think was possible, but it was. Another quick bogey there.

You know, so it was — it’s one of those weird days where I didn’t hit bad shots, it’s just a couple bogeys popped up here and there. It’s not good when you’re chasing the lead, but it’s still not a bad day. But my golf is coming around where I want it to be for the next half of the year, so it’s nice.

PRESS: You seem to have a favorite spot there on 15. Your drive seems —
BUBBA: Seems like it goes over there. That hole is very difficult for me. It’s been difficult. Sometimes I fake it and I make a birdie here or there, but when I look up, I’m looking towards the water being left-handed, so at the same time, you don’t want to hit it up in the trees. You know, it’s a tough one for me, so I’m trying to hit a club that goes just to the front, and luckily it stopped short two days of the water there.

And then it was onto the Olympics.

PRESS: Were you able to watch any of the opening ceremonies last night?
BUBBA: Yes.

PRESS: Does it make it feel more real, that it’s kind of here now as opposed to the months leading up to it?
BUBBA: Well, you know, I’ve still talked about it to my close friends. Watching it, I’m not there, so — I still want to compete all four rounds to say I’m a true Olympian. I want to compete. I don’t want to just make the team and then somehow get an injury and don’t play. So yes, it gives me goosebumps seeing that, listening to Rickie get interviewed. It makes me want to be down there more. I can’t wait to get down there, and hopefully everything goes safely, and we play four days and I can be a true Olympian then.

PRESS: Rickie hasn’t texted you to see how the ceremonies were?
BUBBA: I texted — no, because the ceremonies take a long time, so I went to bed because I had an early tee time, but I texted him before when we went to the event last night, the charity dinner. I texted him my outfit because I wore the opening ceremony outfit, and he texted me back his outfit that he was wearing. I said I was there in spirit, so I had to wear my outfit, too.

PRESS: Is there anything you’re doing this week as far as momentum or motivation, inspiration towards next week?
BUBBA: No, as an athlete when we tee it up, whatever sport you’re doing, whatever sport it is, when you call tee it up and get ready for it, you’re ready at that moment. Coming here, I’m ready. Next week, it’ll be a different mindset, but learning a course that I’ve never seen, but you’ll be ready. It doesn’t mean we’re going to play well, but I’ll be ready, though.

It seems Bubba has been ready. For a while.

Who's ready for the @Olympics? This Guy!! #USA #StarsAndStripes pic.twitter.com/2Fy9S3lzq7