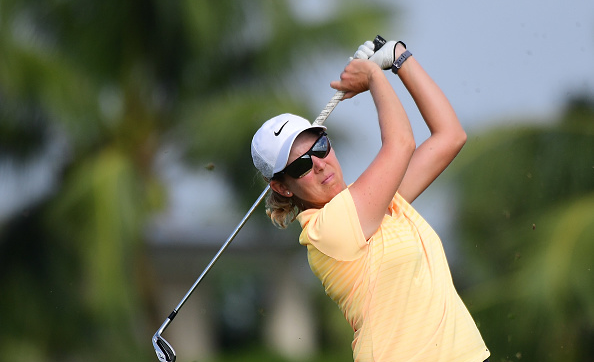 On a blustery day at Jian Lake Blue Bay Golf Club, Ashleigh Buhai posted a 4-under 68, and walked away with the 36-hole lead at the Blue Bay LPGA. 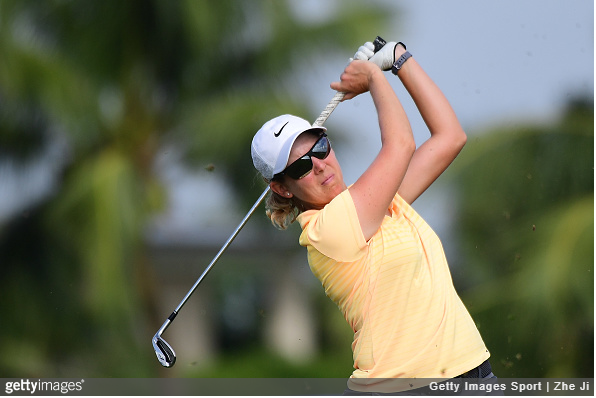 The South African finished her second round with two bogeys and six birdies, including one on 18 to get to 9-under 135.

“I just kind of was playing the golf course as it came,” said Buhai, who holds the halfway pole position for the first time in her career. “It played a lot tougher than the last few days. The wind was more or less the same direction, just a bit stronger, so I think it helps being the same direction as you have an idea what to do. It was just a case of taking more club and just trying to play it with the wind.”

Lurking just one shot back is China’s Shanshan Feng, last week’s winner in Japan. Feng posted a low-round 67, and is alone in second at 8 under.

“Coming back to China, of course, I’m playing in front of all the fans from home,” said Feng, ranked No. 3 in the world. “Of course I feel a little bit of pressure, and I’m pretty sure tomorrow will be more people coming to support me. But I just wanted to bring out my A Game and enjoy the week.”

South Korean Sun Young Yoo, the first-round leader, struggled to a 2-over 74, but her two-day total of 5 under was still good enough for a solo-three position on the leaderboard.

“I didn’t hit it very well. But still, hit a lot of good shots and made a lot of putts. It wasn’t easy. It was so windy today. I’ll take it. I shot plus two today,” said Yoo.

“Scrambling pretty much. I had 24 putts and I started out with six one-putts in a row, so I was making a lot of up-and-downs today,” said Korda, who was paired with her sister Jessica (-1, T12) for the second-straight day.

Four golfers are T8 at 2 under, headlined by 2014 Blue Bay LPGA winner, Lee-Anne Pace of South Africa (75). Defending champion Minjee Lee shot 1-over 73 and is nine shots back at level par.

The Top 10 and ties after the second round of the Blue Bay LPGA.

A look at the second-round highlights of the Blue Bay LPGA.

Catch up on all the round 2 action from #BlueBayLPGA in these highlights: pic.twitter.com/rS5VCi9a88

“I think Jeff is a very good caddie. We’ve been very good friends but never worked together. Somebody was joking. He said, ‘Jeff is better-looking than Mercer.’ (LOL). I don’t say that. So if Mercer is watching TV: Sorry, somebody else said that. No, I think you are better looking.”
–Shanshan Feng, on caddie Jeff King, filling in for Mercer Leftwich