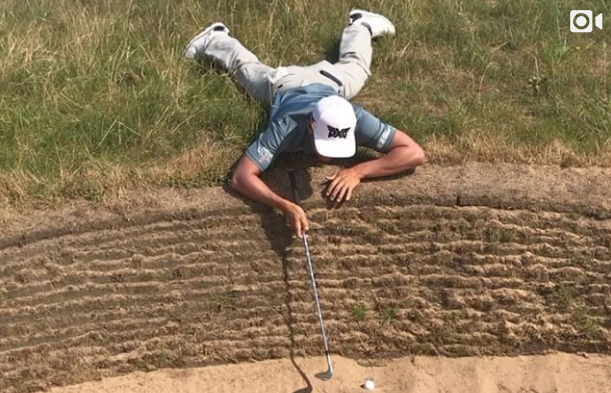 The British Open wouldn’t be complete without its wide array of bunkers covering the fairways and protecting approach shots to the green.

On Tuesday, Kevin Na got a taste of what kind of trouble players will face this week at Royal Birkdale, if they’re not cautious. Na, who didn’t shy away from criticizing the fescuey conditions at Erin Hills, once again took to Instagram to show his fans how troubling shots from the pot hole bunkers will be.

STAY AWAY FROM THE BUNKERS! ?@kharms27 @theopen #theopen #potbunker #골프스타그램

Kevin Na’s caddy, Kenny Harms, was also on hand to capture James Hahn’s interesting attempt to get out of another one of Birkdale’s bunkers.

On the flip side, native Englishman, Ian Poulter looked right at home in his first attempt out of the opening-hole’s greenside bunker.

Poulter, who holed in for birdie, was almost on the verge of missing The Open, until his second-place finish at the Players Championship. Having finished runner-up back in 2008 at Royal Birkdale, Poulter looks primed to tackle the course once again and to capture his first major on home soil.

Green side bunker on the first hole today at @RoyalBirkdale_ and the outcome was a ? @TheOpen pic.twitter.com/5pWw5vyKzh