In 2011, it seemed inevitable, if not imminent.

By 2014, it had become something of a sad, largely-forgotten, cautionary tale.

Now, in 2017, it has finally happened: Patrick Cantlay is a PGA Tour Champion! 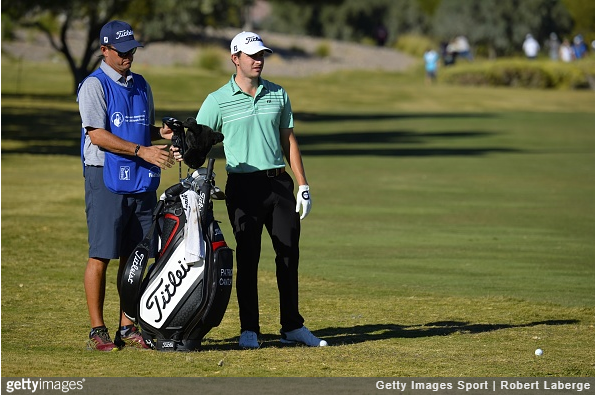 With a final-round 4-under 67, the 25-year-old Cantlay came from five shots back after 54 holes to complete one of the PGA Tour’s great comeback stories: a playoff triumph at the Shriners Hospitals for Children Open in Las Vegas, his first career PGA Tour victory.

Once a can’t-miss amateur prospect who shot a second-round 60 at the 2011 Travelers Championship (as an amateur), Cantlay returned to the PGA Tour in 2016 after years of serious back injuries and a personal tragedy kept him sidelined.

Just 15 events later, of which he did not miss a single cut, Cantlay outdueled Whee Kim, 46-year-old Tour veteran Alex Cejka, blustery conditions, and a devilish 18th hole that he had to play three times on Sunday, for the inspirational win at the same tournament where Tiger Woods had his first career PGA Tour victory in 1996.

It would be unfair to Cantlay to compare him to a young Tiger any further than that, but now that he finally has that first win, he is someone that many fear will assert himself as one of the world’s best in a sport already replete with ultra-talented youngsters.

HOW CANTLAY DID IT

TPC Summerlin has played relatively easy over the past decade, regularly yielding winners well into the double-digits under par, including just last year, when a 47-year-old Rod Pampling took the title at 20-under par. 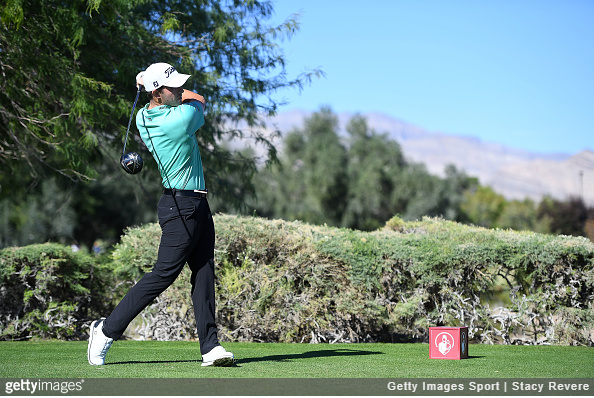 The Las Vegas course looked anything but easy this Sunday, however, as Cantlay’s winning score of 9 under would have tied for 36th a year ago. After opening with rounds of 67, 71, and 70, Cantlay entered the final round T4, five strokes behind 54-hole leader J.J. Spaun.

According to Cantlay, though, the final round was like two different tournaments. The first 14 holes were something of a shoot-out, where he found himself at 11 under with a two-shot lead – off the strength of seven birdies, including four in a row from 11-14.

Then there were the final four holes, typically a difficult stretch, but even more so for the late groups on Sunday as the wind picked up prodigiously.

“It was really two different days out there. It was really like the first 14 holes, and then the last four holes. The first 14 holes was a shootout. For me, it felt like every time I wasn’t making a birdie I was losing ground,” said Cantlay. “Then the last four, with the wind kicking up, I mean, that wind in and off the left on 18 makes that hole particularly difficult, and I was just trying to hit quality shots all the way to the end. The finish did not happen how I thought it would, but it was just enough.”

Cantlay’s 13-foot par save on the par-4 15th was brilliant, but after a disappointing par on the par-5 16th, Cantlay’s lead had completely vanished. The former UCLA star then bogeyed 17, after his first three-putt of the entire week, and made another one on 18 – a dastardly hole when the wind picks up.

Despite a bogey-bogey finish, 9 under was good enough to sneak into a three-man playoff, as Kim bogeyed 18 to match Cantlay at 9 under. The suddenly-hot Chesson Hadley bogeyed the same hole to fall just one short, while Spaun completely collapsed, finishing with a pair of double bogeys.

“I knew it was tough, so I knew those guys were behind me and they still had to play the 18th hole. I wasn’t really worried about those guys. I was trying to, like I said, hit quality shots until the end and try to finish strong,” said Cantlay.

Kim and Cantlay’s third wheel for the playoff? The surprising Cejka, whose low-round 8-under 63 included birdies on each of the final four holes. 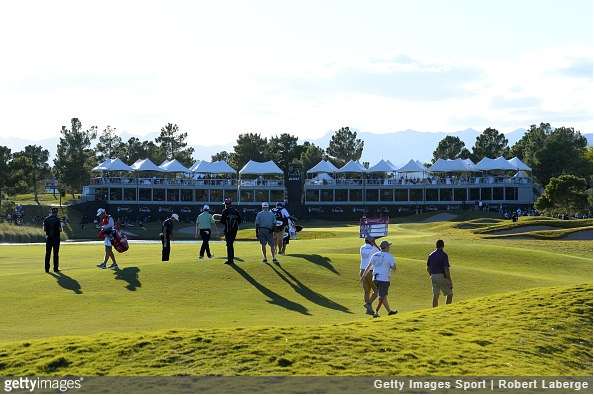 Beginning the playoffs on the 18th hole, all three playoff participants carded bogeys, which brought the sudden-death match back to 18 again.

Cantlay, Kim, and Cejka all hit poor drives – especially Kim who had to take an unplayable – but Cantlay’s second shot, a phenomenal 4-iron cut shot between two trees which rolled to just off the back of the green, gave him an enormous advantage.

“I felt like as long as I kept it below the tree branch that was in front of me and cut it enough, I felt like it would go in a pretty decent spot,” said Cantlay. “I maybe didn’t cut it as much as I wanted to. I think the rough stopped it from being able to spin and get any cut on it, but it ended up in a good spot. It was a good shot.”

After nearly holing his putt from just off the green, and neither Kim nor Cejka able to save par, Cantlay’s short par putt clinched the title – the first of what figures to be many for the former world No. 1 amateur.

Cantlay’s 20 birdies over four rounds tied for the tournament lead.

WHAT IT MEANS FOR CANTLAY

Cantlay’s comeback story was already remarkable coming into the week. After not playing from November of 2014 through February of 2017, he had four top 10s in just 13 starts on the season, and reached the 30-man Tour Championship after a sizzling run through the FedExCup Playoffs. 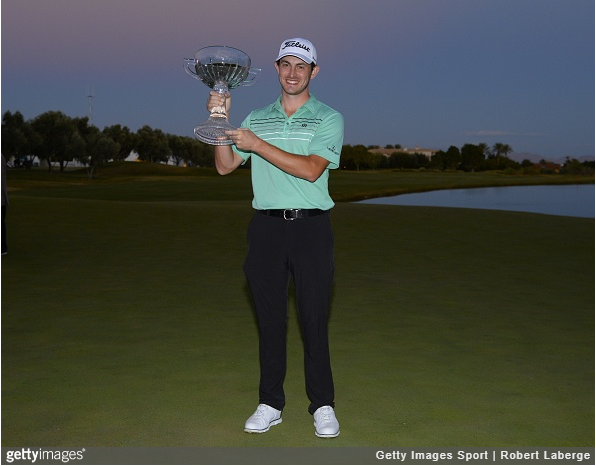 This landmark victory gave validation to all the grueling work he put in during a time where he questioned whether his back would allow him to play the game again.

“There were times that I didn’t know if my back was going to get better to where I could play golf with no pain. I knew that I would definitely — I had a medical. I had ten events on a medical, and I knew I for sure would play at some point. I wasn’t going to just leave them hanging. I would play and see if I could get through it,” said an emotional Cantlay. “But there were some really low times. I’d say I’m better because of it, as tough as those moments were.

“But sticking to it and really being committed to what you’re going to do and working on it every day, I mean, that’s how I got through it. I got through it by just putting my head down and trying to do everything I could every day, and that’s all you can do. Take it one day at a time. I feel like if you do that and really stay committed to that, you can get through pretty much anything.”

It is an incredible story of resiliency that could very well propel Cantlay into that pantheon of elite young golfers with the likes of Jordan Spieth, Justin Thomas, Jon Rahm, and Hideki Matsuyama, among others.

Regardless, his continued ascent will be among the most closely watched stories in 2018.

Cejka’s 63, which came out of seemingly nowhere, jumped him 27 spots on the final leaderboard, but he was not the only player to thrive in the difficult Sunday conditions. 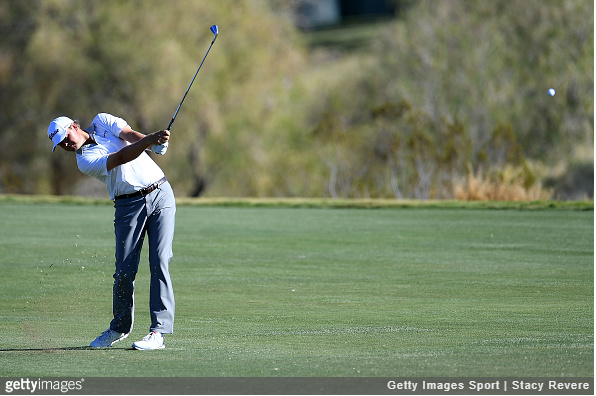 After a third-round 76, Patton Kizzire began his final round in a 29th place tie with Cejka, but nearly played his way into extra holes as well.

“It was a good day. I started the week off playing really well, and then it progressively got a little worse. But today I trusted myself a lot better and made some putts,” said Kizzire, who finished T10 at the Sanderson Farms the previous week. “If I putt well, I tend to play well. That’s kind of the story for everybody, but I think it’s a little more extreme with me.”

Coming into the week Alex Kang had played in just one PGA Tour event, the 2015 Puerto Rico Open, where he missed the cut, and was better-known as the brother of the LPGA’s Danielle Kang, but after a strong week in Las Vegas, the 27-year-old may be making a name for himself.

Kang’s bogey-free 7-under 64 rocketed him 38 spots up the leaderboard, into a tie for 10th place. He is coming off a season on the Web.com Tour where he finished 78th on the money list and missed 8 consecutive cuts at one point between June and July.

One of just a small handful of former major champions in the field, 2010 U.S. Open winner Graeme McDowell has been quiet in recent years, but made some noise on Sunday with a bogey-free 5-under 66 to finish T10, his first top 10 on the PGA Tour since the 2016 THE PLAYERS Championship.

McDowell finished second in the field in driving accuracy and third in strokes gained: putting.

STUMBLING DOWN THE STRETCH

Spaun had the most public collapse of the day, as he went from solo-leader after 16 holes on Sunday to T10, but he was far from the only player to struggle in the wind. 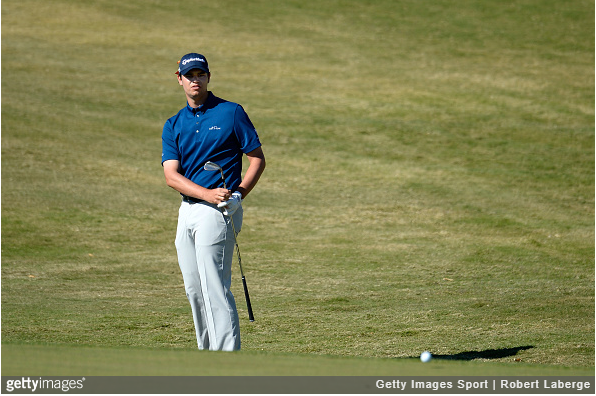 Another high-profile young gun looking for his first PGA Tour victory, Beau Hossler was in second place through three rounds, but was unable to make much happen in the final group, tallying two bogeys and 16 pars in his 2-over 73 which knocked him into a tie for 7th.

However, it was the best finish of the 22-year-old’s promising professional career.

Paired with Spaun and Hossler was Tony Finau, who fared just slightly better than his Sunday playing partners. Finau was in the leadership mix at the turn, but was unable to make the kind of back nine push we saw from Cantlay, Kim, and Cejka, as three bogeys over his final five holes led to a 1-over 72 which dropped him from T3 to T16.

He missed what would have been his fourth top-10 finish in less than two months.

Ryan Moore has a fantastic history at TPC Summerlin, including a victory in the 2012 edition, but he did not look familiar with the course on Sunday, where he dropped 33 spots on the leaderboard after a 3-over 74.

Moore hit just three fairways in his final round.

Perhaps the only storyline in the field that eclipsed Cantlay’s on the “feel good” meter was the professional debut of A.J. McInerney.

A Las Vegas native who survived last month’s mass shooting at the Route 91 Harvest Festival, McInerney received a sponsor’s exemption into the tournament, and made the most of it. A final round 4-under 67 that included six back nine birdies meant an impressive T10 finish in his first PGA Tour event. 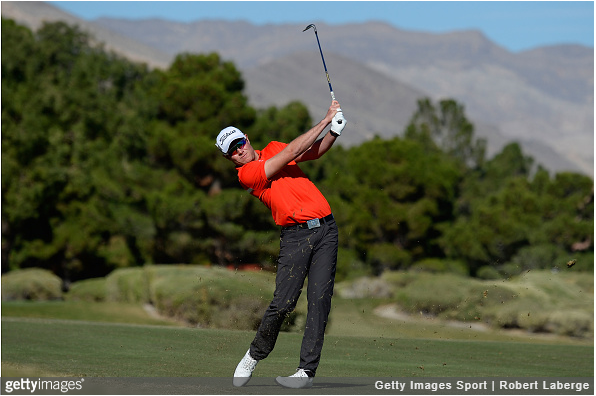 “This whole week has exceeded my expectations. To finish top 10 is just icing on the cake for me. We’re going to go have fun and celebrate with my friends and family, and thank you very much to the Las Vegas crowd and everyone that came out and supported Vegas Strong. It was absolutely incredible,” said McInerney.

The win qualified McInerney for next week’s OHL Classic at Mayakoba, but he hesitantly turned down the invite as he is set to play in the second stage of Web.com Tour qualifying in hopes of maintaining his status on that tour.

“Yeah, playing great on the PGA Tour, I mean, that gives you all the confidence you need. But it’s still another week. It’s still another event,” said McInerney. “I need to get my body healthy and make sure I’m rested up and go execute a few golf shots.”

The T10 was a better finish than any that he had in 21 Web.com Tour events this past season, where he finished 97th on the money list after missing 10 of his last 12 cuts.